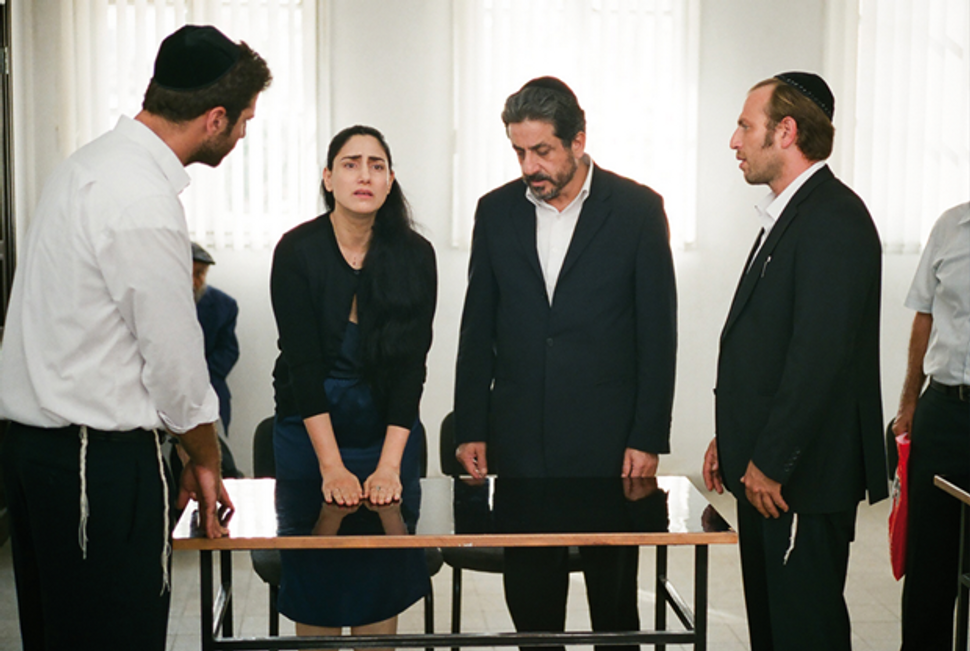 Ronit Elkabetz as Viviane in pleading her case in rabbincal court in ‘Gett.’ Image by Music Box Films

It’s time to talk about Israel’s blacklist. This registry of “untouchables” — the last public accounting of it in 2004 lists 5,305 Israelis — is a motley crew who fall under three general categorizations:

Included in the first group are: Gentiles; those suspected of being Gentiles; “lapsed” converts whose conversions were repealed because of conduct deems “wayward” by Israeli state rabbis, and the children of those lapsed converts. In the second category of “unkosher Jews” are mamzerim and suspected mamzerim — children born of their mother’s adulterous relationships, or of their incestuous relationships, even if coerced. These include children born of “consanguineous” incestuous relations (among blood relatives) like a father and daughter, as well as “affinal” incestuous relations (non-blood relatives) like a woman with her sister’s ex-husband, or a widow with her brother-in-law if she had had children with her husband. In the third category of “kosher Jews” whose options are limited are, among others: cohanim or priests who live with divorcees or converts and whose daughters are not permitted to marry other priests; divorced couples who slept together after divorce and need to redo the get ceremony if they want to marry other people; as well as women suspected of adultery who are barred from marrying their ex-husbands or lovers.

All of the above kinship rules are based on ancient, biblical and rabbinic laws and have been incorporated into the operative, family law of the land in the State of Israel by way of the Rabbinic Court Jurisdiction (Marriage and Divorce) Law of 1953. In 1976, then Attorney General, and later Chief Justice, Aaron Barak, approved the blacklist, implicitly and prospectively expanding the rabbinic court’s jurisdiction in a matter that the law was silent on. In 2003, Barak’s opinion was reviewed by the new Attorney General and re-confirmed.

On the (liberal) face of things, it’s pretty bad. Ancient laws infringe on Israeli citizens’ rights to marry, freedom of conscience, and privacy. But when you watch it operate up close, which has been my professional lot as the director of the Center for Women’s Justice (CWJ) where we represent people on the list, and others, the picture gets even more daunting. It is more than just the state offering up a few unfortunate souls for the sake of the Jewish polity. It’s about how state, secular actors like the Attorney General’s Office, the Justice Department, and the Israeli Supreme Court sacrifice, again and again, the democratic heart of the Jewish State, allowing state actors with the violent power of the state behind them to aggressively enter into our bedrooms, kitchens, and the private recesses of our consciences.

Take for example “Miriam”, a recent CWJ client who “found” herself on the blacklist after she was divorced from her husband. When the get was being arranged, her soon-to-be ex-husband told the rabbis that he suspected that she had had an affair with “Yossi”. That suspicion was enough for the presiding rabbi to put “Miriam” on the blacklist. Though she did not want to marry “Yossi”, “Miriam” wanted her name off the (offensive) list. CWJ petitioned the rabbinic court to remove her name. We claimed both that the procedure by which “Miriam” had “found” herself on the list had been flawed and that the court had no jurisdiction at all to put her on the list in the first place. Since “Miriam” had gotten divorced by agreement (i.e. the divorce was not contested), we argued, the issue of whether she had, or had not, slept with “Yossi” during her marriage was not relevant to the divorce proceeding and hence not within the parameters of the Rabbinic Court Jurisdiction Law. The District Rabbinic Court disagreed but was willing to conduct a retrial on the matter. Our client did not want to undergo such a (demeaning) trial— where her sex life would be discussed— and we appealed the decision to the High Rabbinic Court on both procedural and substantive grounds. When we lost, we appealed to the Supreme Court.

The Supreme Court, headed by Chief Justice Asher Grunis, was not sympathetic. The Court wasn’t willing to help out “Miriam” since she had refused to undergo a retrial. And it also wasn’t willing to accept our principled claim that the rabbinic court had no jurisdiction at all to conduct sex trials in uncontested divorced proceedings, rejecting our request that it examine the Jurisdiction Law with “strict scrutiny.” Instead, the Court deferred to the opinion of the Justice Department attorney appointed to represent the State against us on the matter. That attorney, in response to our substantive jurisdictional claim, referred the Court back to Barak’s 1976 opinion with regard to the blacklist. And as for our procedural claim, the Court sent me to the negotiating table to draft regulations with the government attorneys to make sure that blacklisting and sex trials would meet the standards of fair trial and due process. I used the time (unsuccessfully) to try to convince the public servants that they should be working to protect my and my clients’ human rights, not the state’s interest. And they used the time (unsuccessfully) to try to get me to lend my hand to the regulations. About 10 days ago, after the Chief Rabbi approved of the draft regulations, the Supreme Court threw out our case, leaving us a somewhat ambiguous opening to challenge the newly minted regulations with another concrete case.

Bottom line: “Miriam” is still blacklisted. We have official regulations authorizing sex trials drafted by the Justice Department and more or less ok’d by the Supreme Court. Ex-husbands are dragging their ex-wives to state rabbinic courts if they apply to marry persons that their ex-husbands suspect that they had slept with during their marriage. Rabbinic courts are hearing these cases and women, sometimes years after their divorce, are bearing the burden of disproving their (often vindictive) ex-husband’s suspicions.

Everything is wrong with this picture. It is a picture of a theocracy gone wild, financed with tax-payer money, regulated and bureaucratized, and supported by a shortsighted, unimaginative, and unfocused secular democratic arm of the state. Max Weber, Ben Gurion, John Stuart Mill, Ahad Ha’am, God Himself, and many others are all rolling over in their graves. This is not what a Jewish State should look like. And it doesn’t have to be this way. It’s time for both Israelis and those interested in Israel’s future to call on the Israeli government to set up a civil rights division in the Justice Department.

Susan Weiss is the founder and director of the Center of Women’s Justice in Jerusalem and is a scholar-in-residence at the Hadassah-Brandeis Institute.