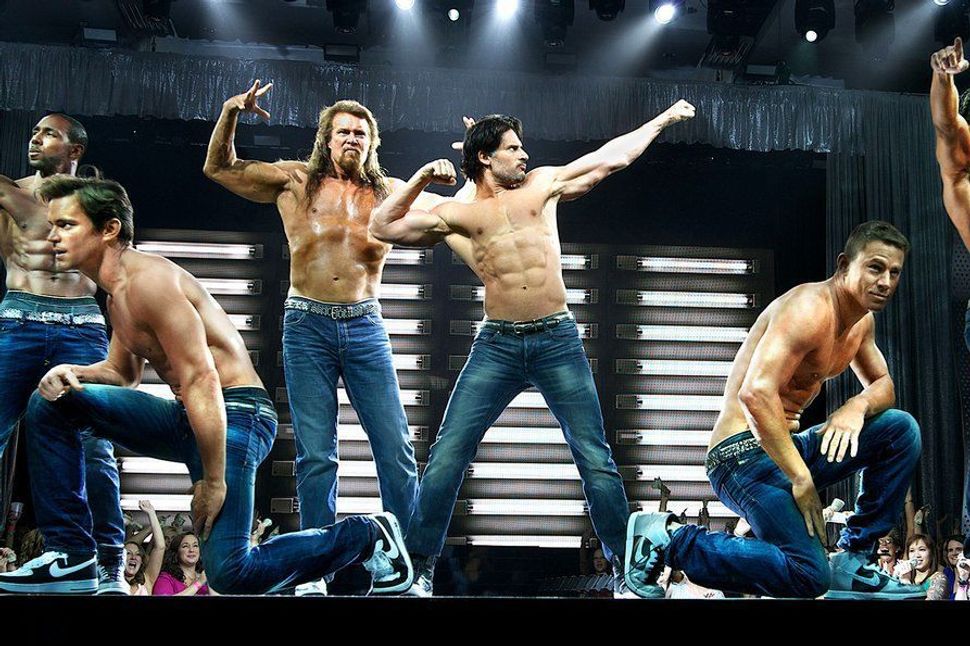 As the lights dimmed for a Monday evening showing of “Magic Mike XXL” in a suburb of Tel Aviv, I spotted a solitary Haredi woman a few rows in front of me. I remarked to my friend that a film dedicated to the exploits of male strippers was far from “tznius,” the rules of modesty embraced by many in the Orthodox world.

The film is two hours of feminist spectacle, and I loved every second (and not only because a few scenes take place in my hometown of Jacksonville Florida). In the original 2012 “Magic Mike,” Mike Lane (Channing Tatum) briefly becomes a male stripper in a surprisingly deep meditation on masculinity and the elusive American Dream. In the 2015 sequel, we learn that despite the growth of his custom furniture business, Mike rejoins his old gang for one final hurrah at the 2015 Myrtle Beach strippers convention. With none of the heaviness of the original, the film joyfully follows their road trip and final performance, with plenty of shirtless bumping and grinding along the way, including impromptu vogue style stripping in a drag club and a subscription nightclub catering to women of color run by an unforgettable Jada Pinkett Smith.

When Magic Mike announced that his God is a She, I thought again of my Haredi female moviegoer and the film’s embrace of a female perspective. I realized that “Magic Mike XXL” was far more tznius than I had previously assumed. The movie’s women are, with few exceptions, fully clothed. They appear in all shapes, sizes, and colors, unlike the vast majority of movies in which only traditionally attractive white characters get to express affection without ridicule. Even Magic Mike’s quasi-love interest, a former female stripper, never removes an article of clothing. There are no actual sex scenes — only morning-after confessions or simulations between the fully clothed women and the less than clothed male erotic dancers. What the film does have is muscular male bodies, and a lot of them. But since modesty dictates are designed largely for straight men, “Magic Mike XXL” is tznius by default. Women, as I learned countless times in Orthodox Jewish settings, aren’t as sexual as men, especially when it comes to visual stimulation.

The collectively effervescent screaming at the 2015 Myrtle Beach male strippers convention reminded me of the co-ed shrieking that accompanied the Orthodox Jewish youth group conventions that I attended regularly as a teenager. These gatherings often featured a Shabbat afternoon “Ask the Rabbi” session and I remember the time a male participant asked if “kol isha,” the prohibition on listening to a woman sing, applied to women with less than pleasing voices. The rabbi responded that the prohibition still held, comparing it to situation of an ugly fat woman taking off her shirt, which was forbidden due to the possibility, however slight, of male arousal. It didn’t occur to him to broach the subject of unclad men. Another time, a woman asked about the permissibility of listening to an attractive male singer, and was told not to worry — she wasn’t in as much danger as her male co-religionists of wayward lust. These dismissals didn’t just happen in my adolescence, it happened regularly as an adult as well. I once sat at a Shabbat lunch in Manhattan and listened to a leading Modern Orthodox rabbi, a scholar in residence at my synagogue, explain that female desire was not significant enough to warrant halachic notice.

“Magic Mike XXL” is entirely and completely designed for the heterosexual female gaze — a gaze which Orthodox Judaism struggles to acknowledge. Sure, there are Talmudic and Kabalistic references to female sexuality. But my experience silenced these scattered citations as I witnessed male rabbis repeatedly deny the existence of female erotic desire. Secular norms reinforce these male centric positions. Furthermore, these tropes also dovetail with borscht belt stereotypes of Jewish American women as frigid, as evidenced recently by Jon Stewart’s to Jewish women’s dislike of oral sex. In Orthodox Judaism (and in general society, for that matter), female desire is often buried at best and ridiculed or demonized at worst. Jewish women are too often socialized to worry about what harm their body can cause to men rather than what it might mean that they themselves are embodied beings with desires that deserve recognition and validation, regardless of size, color, and marital status. I have many things I wish I could say to those rabbis, but perhaps they should just learn more from the God of Magic Mike.

My anecdotes are endless, and the counterexamples are few — although thankfully growing in number. Recognition of female desire symbolizes the struggle to reconcile the full personhood of Orthodox women within a traditional halachic system. However, I do not pretend the fault lies solely with Orthodoxy. If this were exclusively a Jewish problem, “Magic Mike XXL,” despite its pitfalls, would not be a rare example of women’s experiences taken seriously. I do not completely reject notions of modesty, nor do I think female and male expressions of sexuality are identical. But when the bar for feminism is so painfully low, any victories should be noted. I thought of those debates again when I heard Donald Glover’s character Andre explain to Magic Mike his stripper/songwriter work ethic: “All we got to do is ask them [women] what they want, and when they tell you, it’s a beautiful thing.” While Andre’s work might end there, it is only the beginning for us. So while the answers might be surprising, the saddle is waiting — just come and jump on it.