Women Are Waging Peace — Maybe It’s Time to Listen Up 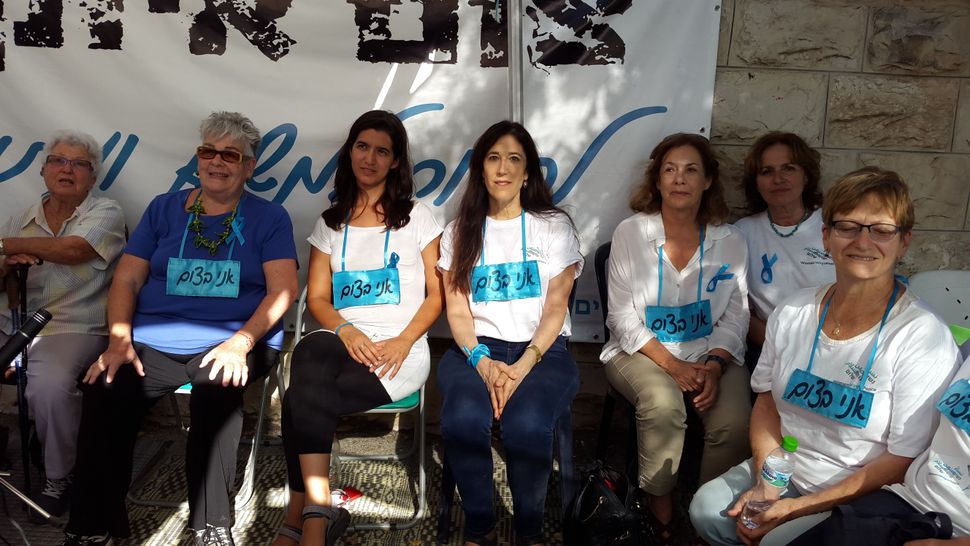 In light of the recent spate of Jewish terrorism in Israel, a friend of mine compiled the following list of names: Yisrael Lederman, David Ben Shimol, Haggai Segal, Yona Avrushmi, Raphael Solomon, Ami Popper, Baruch Goldstein, Yigal Amir, Eden Natan Zada,Jack Teitel, Asher Vizgan, Yosef Chaim Ben David, Yishai Shlisel. Some of these names should be familiar, some are relatively unknown, all are Israeli Jews who carried out shocking acts of violence against random Arabs (or in some cases against Jews). And all of them, as it turns out, are men.

It is a bizarre and mind-boggling fact of this conflict that on the Israeli side, men dominate in violent actions, and men also dominated in the indefinitely stalled peace negotiations. Even when Tzipi Livni had the official job description of being responsible for negotiations following Operation Protective Edge, her then-boss PM Netanyahu found ways to exclude her – and all other women – from the talks in Egypt. In short, men have created this war and have thus far completely failed at resolving it.

People can debate the reasons for this striking gender factoid. Some will argue that women are more innately peaceful by nature or biology. Others will claim that women are just like men, but we have been out of locations of power in general, so we haven’t had the opportunities to act just like men. Others will say that the male-domination of Jewish terrorism and the Israeli military elite are just random realities and nothing to be concerned about. Personally, I contend that women have been acculturated for generations to be caretakers and empathizers, and many women today continue to cultivate that inherited culture while men have for the most part ignored us and chosen their familiar path of reaching for their weapons.

In any case, no matter what the cause of this marked gender divide, one cannot help but think of Einstein’s famous quip that one cannot solve a problem with the same tools that created it. The violence in the Middle East was created by men exclusive of women, and it seems evident that it will not be resolved by men continuing to exclude women.

While terrible acts of Jewish-initiated violence have occupied the public’s attention over the past week, a group of women has been tirelessly, and hungrily, working towards change. Founded after last year’s Gaza War, Women Wage Peace, has spent this summer fasting, in an act of defiance aimed at forcing the government to return to the negotiating table. The group that now numbers over 12,000 members with fifty branches around Israel, has embarked on a fifty-day fast to mark the fifty days of the war. Each day, five or six different women fast, with some 250 women participating in this variation of a hunger strike. Each day, they sit in a poster-plastered tent outside the Prime Minister’s house, accompanied by dozens of supporters aiming to get the attention of passersby and ultimately the government.

“We are a diverse, a-political organization that does not affiliate with any particular party,” Marilyn Smadja, a professor at Tel Aviv University and one of the founders of Women Wage Peace, told me. “This is the first time that such an organization exists, one with a political agenda but with members from all across the political spectrum – religious and non-religious, right and left, Muslim and Jewish. All the women in this group have one thing in common: we want to see the government taking the initiative to bring a permanent solution to the conflict. We’re not telling the government what should be in the agreement or who the partners should be. We just want to see the government take action.”

I visited the tent last Thursday, day 26 of the fast, when the group heard from a diverse panel of Jewish speakers and then screened the film, “Pray the Devil Back to Hell” about Nobel Peace Prize winner Leymah Gbowee’s successful women’s campaign to bring peace to Liberia. Some 75 women – and a handful of men – crowded the busy intersection and mingled excitedly around the makeshift structure, despite the noise and the heat, and then drew inspiration from one another and from Gbowee.

Zeruyia Shalev, a Jerusalem writer and one of the women fasting told me: “I deeply identify with the aims of this group, which is challenging the discourse in this country. I can’t stand the vulgar language that dominates our politics and society. Here women speak differently. It’s pluralistic organization seeking what we have in common. This is the first time in my life I’ve joined a movement, and I’m doing what I can, which means fasting.” She said that the fasting had multiple meanings for her. “Just like people fast in memory of the destruction of the Temple, I’m fasting in memory of all the soldiers who died in the war, in the hope that this will be the last war, that Netanyahu will lead us to an agreement.”

Shoshana Bellin of Moshav Nordia, who moved to Israel from Los Angeles in 1969, was also fasting. “Fasting is a debt that I’m bringing forward for my grandchildren so that I can tell them I actually tried to do something to make life better for them.” She added that fasting involves “the same qualities that are required of sitting down for negotiations: willingness to give up on something, diligence, and decisiveness.”
Interestingly, many of the women I spoke to were motivated by a commitment to their children and grandchildren. For many women, the reality of sending their children into violent conflict was a wake-up call. Susie Ahyad, who moved to Netanya from New York almost fifty years ago, said that she was fasting for her five grandsons who will one day be serving in the army. “I don’t want them to be in the position where they will have to fight.” She added that this movement was started by women who were tired of sending their loved ones into violent conflict.

Sharon Pinsley of Jaffa – whose grandfather Harry Seigel wrote for the Yiddish Forward over half a century ago – told me that working for peace has always been very important to her and she belongs to several women’s peace groups. “I have always believed that women will be the ones to bring about an agreement. We need women to force the prime minister into change. We have had leaders who started out militant and found their way to peace towards the end of their lives – like Rabin and Sharon. There was nobody more militant than Sharon, but he made peace, and he got us out of Gaza.”

Significantly, women of the world have been very influential in bringing peace in conflict-ridden areas around the world, such as Liberia, Northern Ireland, Guatemala and more. Research shows that women’s involvement significantly increases the probability of bringing peace. Indeed, the UN acknowledged that the inclusion of women is a key step in bringing peace, by passing UN Resolution 1325. Israel was the first country to sign on to this resolution, but has thus far not done anything to practically implement it.

Although this is not always the case that women bring peace – in fact the few women in Netanyahu’s cabinet are at times the most war-mongering – the women in Women Wage Peace are relentless in their pursuit of dialogue. The panel of speakers in the tent that day, which included two right-wing settlers, one Reform rabbi, a professor and a former left-wing MK, was not without tensions. In particular, when one of the settler women, journalist Lali Deri, expressed her view that “left wing women care more about the Palestinians than they do about their own nation,” there was a noticeable discomfort from a perceived tone of accusatory, generalizing, and imprecise language, which violated the culture and aims of the group. “You have offended me, and misunderstood this whole group,” Smadja replied firmly as Deri laughed. “We are not leftists but a diverse group including many who voted Likud just like you.” A woman in the crowd added, “You weren’t listening to what we were saying. I’m not here for the Palestinians but for myself. This is about my own people, the Jewish people, and what kind of people I want us to be.” Still, the movement organizers stood up and told Deri that they welcome her participation in the movement. “Something really important started here,” one of the founders told the group. “We hope you will return.”

So while women’s inclusion in the peace process is a vital component of successful peace-making, it is not without challenges. But while the women work tirelessly to create effective rules of their own engagement, it’s not even clear whether anyone in Netanyahu’s government has noticed the women in the tent outside his house. In the meantime, not only is there no negotiation on the horizon, there are also no women in the government whose job title includes a seat around the table. And the violence, as we see, continues.

Women Are Waging Peace — Maybe It’s Time to Listen Up