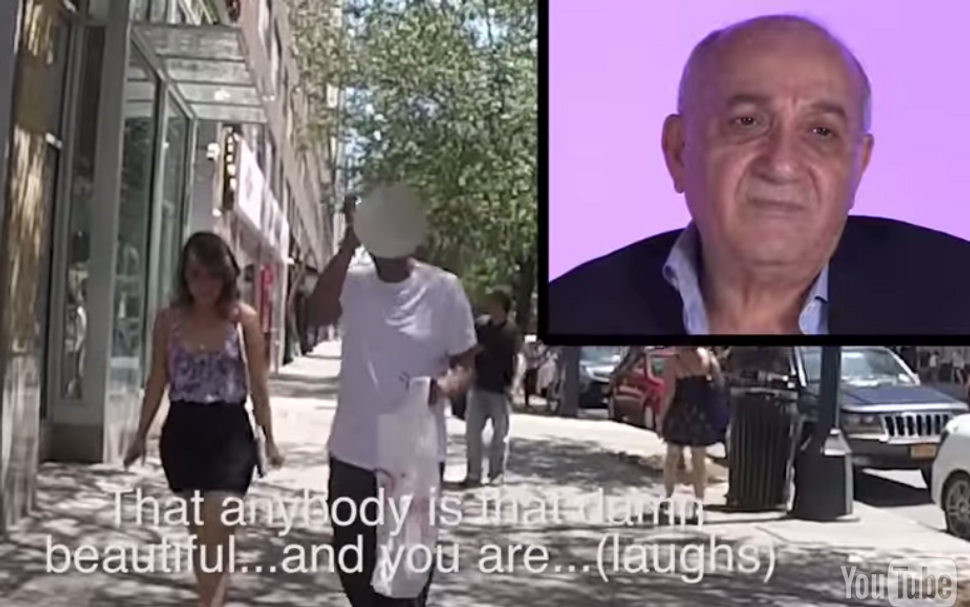 If you’re a woman, chances are that showing a woman walking in New York City for 10 hours resonated with you in some way.

The clip, which was seriously debated online, was meant to draw awareness of how problematic street harassment can be. Some were moved. Others dismissed the whole thing.

But what would your father say if he saw you being street harassed?

A new video, produced by The Scene, shows an Israeli dad watching a reel of his daughter getting cat-called. He’s the last of three fathers shown similar footage of their daughters walking through Manhattan, south of 34th Street.

At first, Israeli dad doesn’t seem to get it. When someone yells, “Very nice” at his daughter as she’s walking through Washington Square Park, he responds:

“If he said that to you, you are very nice, there is no problem there.”

Daughter Daniela is flattered (in an “Aww dad, you know nothing but you’re cute,” kind of way). “Thank you Aba, I think you are very nice too,” she replies. At least a moment of invasive street harassment got her a nice compliment from her dad.

But doesn’t Aba get the difference? A compliment from a man you know and care about is most certainly an sign of love, but an unsolicited catcall is a threatening and objectifying act. Aba continues not to get it, when he’s shown someone catcalling at his daughter and calling her beautiful he says:

“She is beautiful, he is not lying.”

Awkward. And somewhat exasperating, as illustrated by Daniela’s groan as she continues to smile at him.

As women, we’re used to being told to accept compliments. What we’re less used to is having the people that we love, especially the men in our lives (fathers, boyfriends, etc.) tell us that others should respect our autonomy and our right to walk down the street un-harassed.

To be fair, the other dads in the video seem to be angrier and more emphatic from the start. And I don’t think that Aba Meir doesn’t love his daughter. He seems like a great dad. But does he just not get street harassment?

It’s only when Aba sees a man following her for a few city blocks that it finally clicks. Note: This time, the pursuer is an older man, and a person of color. I can’t say whether his defensive attitude is a result of those specific parameters. Would he be as irritated if it was a handsome young Jewish man? Who knows — but let’s give him the benefit of the doubt.

Here’s what he says:

“These old men, they have to respect a woman on the street, not to come on so strong to her.”

As the man continues to follow Daniela — who is obviously uncomfortable but most likely too frightened to firmly ask him to leave her alone — Meir says: “That’s upset at me now. The way he talked, the way he has no shame coming on like this on the street without even knowing this young lady.”

“Our daughters and wives and mothers are to be treated with respect.” he concludes. Bravo Aba!

But should we be so quick to cheer?

I find the premise of these videos of boyfriends and fathers watching the women they love being “cat-called” (too cute a word for how threatening it actually feels) a bit frustrating, because they assume that men can only “get it” if it happens to a woman that somehow “belongs” to them.

It’s more of a “How dare someone disrespect MY woman!” when what it should be is: How dare men (regardless of age or color) make women feel unsafe just for walking down the street. It’s more macho than feminist.

Case in point: “If you were present and he was doing this in front of you, what would you say?” the producer asks Meir. Waving his glasses in the air, Meir gives the ultimate Israeli dad answer: “I think there would be a fist fight”.