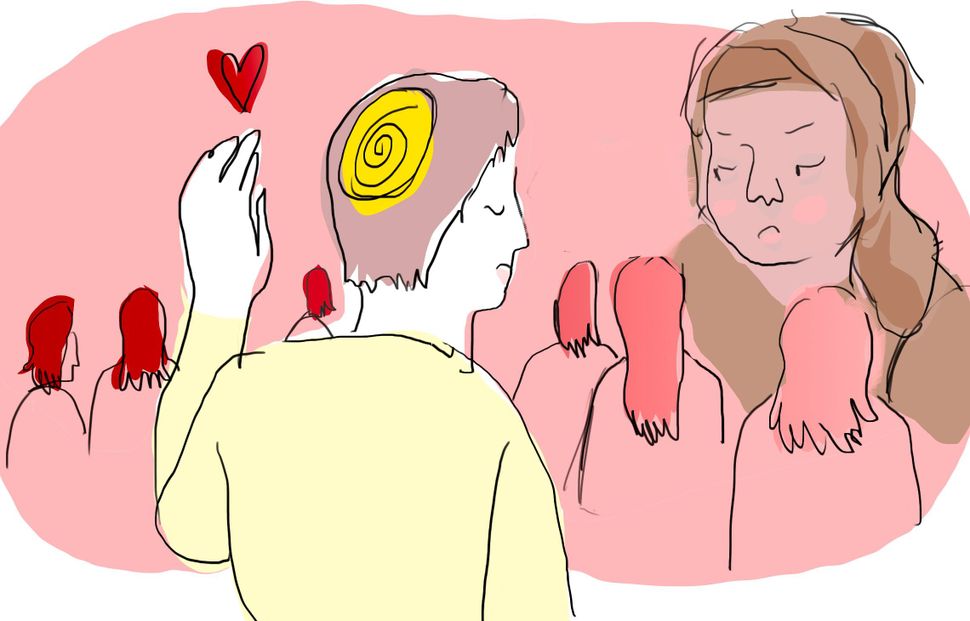 I that if New York is such a great place to meet people then why are there so many singles out there? Lo and behold, there might actually be an answer. Writing in TIME, Jon Birger, author of “Date-onomics: How Dating Became a Lopsided Numbers Game” a new book on dating, blames demographics. Because there are more available women than men, a sort of paradox of choice effect arises where men are freer to be more selective due to the greater number of options, even if it means they never actually find someone. Dates for men become a form of comparison shopping while women face the burden of impressing the very people who are constantly looking for something better.

Birger essentially gives a demographic answer to the Shidduch Crisis but others focus on more socially systemic problems. Avital Chizhik-Goldschmidt writes that the Orthodox world is obsessed with “externals” of women’s appearances, which in part manifests in the dating process, particularly pertaining to men’s unrealistic (if not insulting) expectations. On the other hand, Chananya Weissman notes that women may be similarly superficial in their expectations of whom they’re willing to date. Having been personally rejected by innumerable women — sometimes being told explicitly due to the lack physical attractiveness — I can attest that women do have the ability to be just as selective as men, regardless of demographics.

I have argued elsewhere that there is the Shidduch Crisis is itself a myth, but I am starting to realize its perpetuation serves a purpose. Specifically, the Shidduch Crisis a useful vehicle for social criticism or an opportunity to cast more judgement and blame rather than admit people are individuals who will ultimately make their own decisions in the pursuit of happiness.

Take for example the focus on appearance. Many Jews sing on Friday night that “beauty is vain,” but Jewish law recognizes the importance of physical attraction in a marriage; a husband cannot marry his wife sight unseen, lest he find her unattractive and resent her after the fact (B. Kiddushin 41a). The problem is that beauty is in the eye of the beholder. A shadchan describing someone as “attractive” at best reveals the shadchan’s opinion (assuming the shadchan is being honest, which is not always a given), but the only opinions which really matter are the two people actually on the date.

Can people be unrealistic in their expectations? Absolutely. But ultimately it is each individual’s choice to make their own determinations as to what will make them happy. And while this criteria is probably subject to change with time and experience, no one else can dictate what will make someone happy.

At the same time, the responsibility for meeting these expectations, particularly the unrealistic ones, is not the responsibility of others. Blaming singles, either men or women, or shadchanim for not producing one’s ideal mate runs counter to basic maturity. At some point adults learn that the world or our society does not always conform to our wishes, no matter how reasonable we think we happen to be. No one ever “deserves” another human being or someone else to cater to their needs. There is plenty to be upset about in the dating world, but people are free to endure or change as they see fit. It is still their choice to make, and to live with the consequences of their decisions.

Rather than viewing singles as a collective or marriage as a team sport, I suggest that embracing the individuality of dating is a healthier approach for everyone involved. Singles may start to recognize their own needs instead of following the dictates of society and may learn to respect the individuality of others. Those interested in “helping” singles may try to learn more about the individuals to better address their particular needs.

Externalizing the problem by focusing blame on men, women, parents, shadchanim, etc, no matter how valid the criticism, only distracts from acknowledging that singles are individuals. If the goal, as the cliche` says, is to build a faithful home, a bayit ne’eman beyisrael, then perhaps we ought to focus on strengthening its foundations.