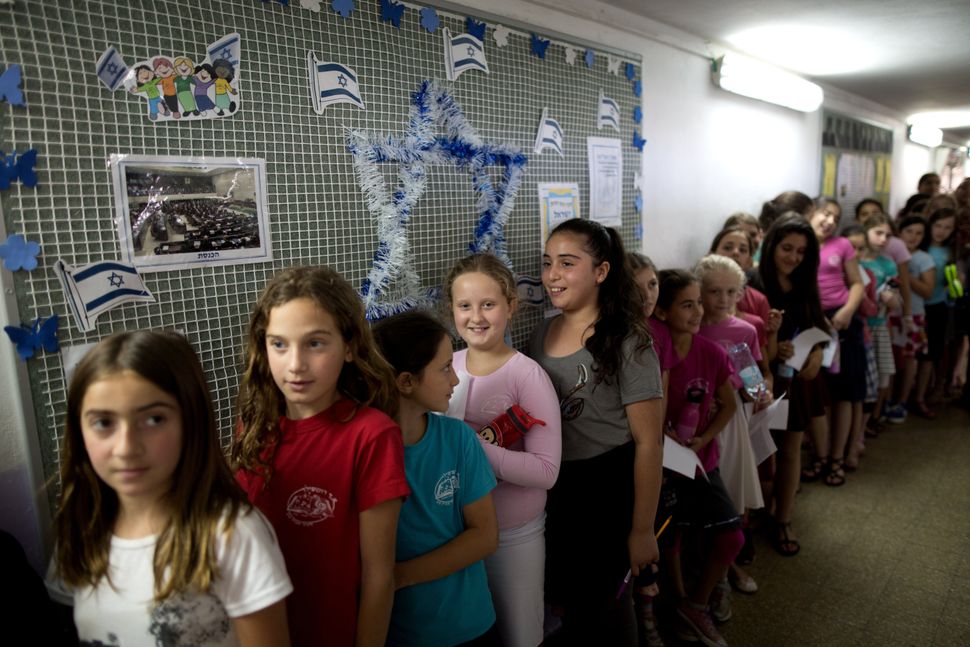 Crossing guard duty is the sixth-grade badge of pride at my daughter’s suburban Israeli elementary school. Each morning and afternoon 12-year-olds clad in orange safety vests usher younger classmates over the crosswalks, confidently stopping traffic to let them pass.

Afterwards, the older kids head for the bus stop to catch a ride home, or hop on their bikes – another sign of their burgeoning tween independence.

That all changed in a heartbeat the moment reports came in of the two stabbing attacks in my city Tuesday morning. All of our kids’ hard-won maturity and independence went out the window. Crossing guard duty was immediately cancelled. No parent was willing to allow their child to stand vulnerable and frightened on a street corner three blocks away from a spot where local residents had fallen on the sidewalk in pool of blood. No one felt comfortable with kids walking, biking or riding the bus home as well. Just like when they were tiny preschoolers, the parents – many pulled suddenly out of work – waited in line in their cars, making sure that their child stayed behind the school gate with the armed guard before they ventured out to be picked up and delivered safely home.

“Look Mom, I’m still alive!” my 11-year-old sixth-grader announced at the end of the school day – both because she was genuinely relieved to be home safely and as a commentary on the obsessive worrying of her teachers and parents throughout the day.

Parenting under normal circumstances is difficult enough – we all struggle with our instinct to protect and nurture our children from a risky and dangerous world, while helping them develop self-reliance and confidence in their own coping abilities as they grow into adulthood. Terror, naturally, disrupts this process big-time.

As the number of attacks on civilians mounted this week around the country, telephone lines and social media groups buzzed with hysterical concern, as “free-range” Israeli parents were transformed into hovering helicopters of worry.

Much of the hovering took place over their kids’ schools:

*Parents of children in many public kindergartens were upset because there were no guards at their kids’ schools and many picked them up and brought them home in the middle of the day. Political struggles broke out, pitting parents demanding guards at the gates with cities saying that there were no funds for them and that it was illegal for parents to privately pay to guard their kids. In Jerusalem, parents held a strike over insufficient security measures at schools.

*Parents of children of all ages set to go on field trips demanded that they be postponed, sending schools into a dilemma as to whether all trips were unsafe or only certain locations. Even when the school decided to carry on in the spirit of stability and routine, parents voted with their feet by refusing to sign permission slips and keeping their children home. For my daughter’s class, set to go on their first overnight trip next week, another milestone of maturity was delayed, with an email from the principal, who pinned the decision on the parents, writing that the school “hadn’t been worried at all about the children’s safety and had thought it was important on both a personal and national level to keep their routine in place. But in the end, we decided to postpone the trip because we got the message that the parents were stressed about it, and didn’t want to create a situation in which some of the children would go and others wouldn’t.”

*As the news headlines blared that some of the perpetrators were construction workers, political correctness went out the window as parents demanded that construction projects in and around schools be halted so that Arab workers would not be near their children, and that Arab gardeners and cleaners working in schools not be permitted in the gates. After principals across the city met to discuss the issue, an announcement was sent out that construction work would indeed be temporarily halted, that Arab gardeners would not come to work (Jewish gardeners would) but that the Arab female cleaners, would be screened each day and allowed in.

*But school policies were straightforward and easy to resolve compared to the daily micro-decisions that parents of teenagers have been facing. High school students who depend on public transportation to get to and from school and other important parts of their lives. Most of their parents are unable to shuttle them around on a daily basis without quitting their jobs or abandoning their other children. They have to grit their teeth and utter the mantra: “Text me when you get there safely” even as images of the recent Jerusalem stabbing of a 13-year-old on his bike race through their minds.

“What do I do?” asked a friend, her teenage daughter paralyzed with fear and crying at a bus station on her way home. “Lose two hours of my day and pick her up or coach her through her fear onto the bus? I kept trying to tell her to stop sitting there and crying – she was making herself even more of a target.”

“What do I tell her?” asks a mother in a Facebook group for Israeli teens, whose daughter wants to take an evening bus from a family celebration back to her boarding school. “Let her do it if she’s not afraid or tell her that she can’t because it’s not safe?”

You might think that Israeli parents would be old pros by now after last summer’s rocket attacks. But not really. With this rash of attacks there are no sirens, no shelters, and no instructions from the Home Front Command. It has been up to every citizen – and every parent for himself to judge how to behave at any given moment. Israeli adults respond to the situation in radically different ways – some defiantly going about their businesses and other hunkering down at home – and the messages to teens are inconsistent and confusing.

One friend’s teenage son asked if he could take a Tel Aviv bus to a meeting for volunteer work in southern Tel Aviv migrant preschools. “I took a deep breath and said yes. Text me when you get there. He got there. He texted. He found the group leader. He sat with her for 15 minutes while every single other kid texted that they weren’t allowed to come.”

Perhaps the trickiest part of the equation has been balancing messages of fear in the air with calls to treat their fellow citizens who are Arabs with respect in these tense times. One school principal in my city sent a personal note out to parents asking them to tell their children to greet the cleaners who work in the school and look them in the eye. Educationally, he said, it is important for the children to be taught not to fear them, and for the workers, it is important that they feel comfortable in the school.

As for behavior on the street and on the buses; presumably parents with hard-right wing views have an easier time sending a clear message – Palestinian Arabs are dangerous: view them with suspicion and stay as far away as possible.

For the rest of us, balancing a message of sensible self-protection without fostering racism is a difficult – but important task – when fear and hatred are in the air. We want to keep our precious children alive – but we want to keep some hope for a peaceful future for them alive as well.