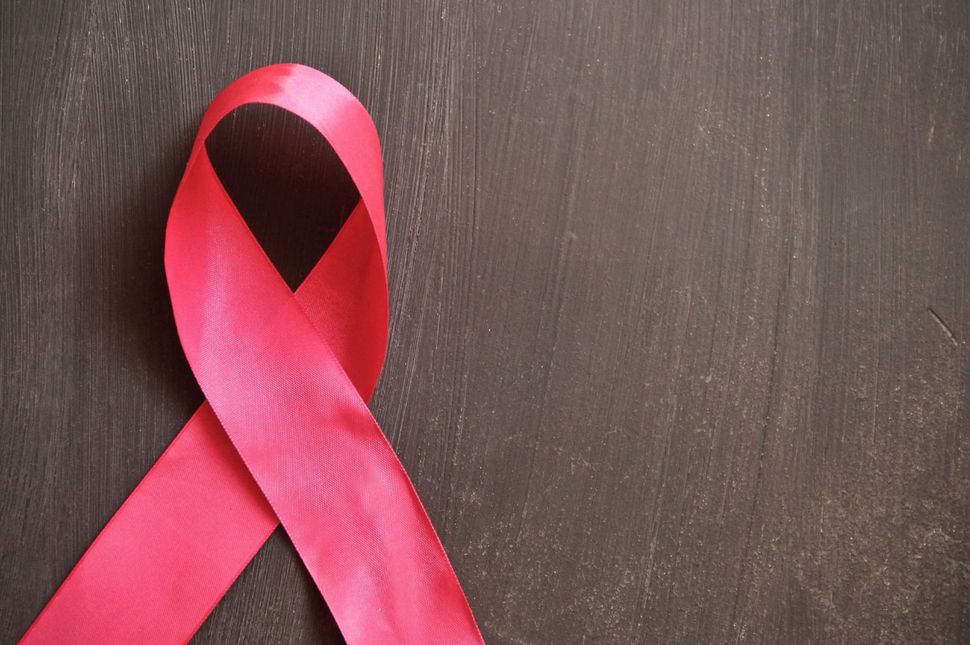 (JTA)-— It’s been a busy couple of weeks for breast cancer. Of course, breast cancer is always busy, exerting its sneaky destruction through abnormal cell growth. But now it’s October and Breast Cancer Awareness Month, and the scary fact is everywhere again: One in eight women will be diagnosed with breast cancer during her lifetime.

This time around, the talk about breast cancer feels more urgent, more ubiquitous and definitely more confusing. Recent headlines have screamed “What If Everything Your Doctor Told You About Breast Cancer was Wrong,” in Mother Jones, and “Why Doctors Are Rethinking Breast-Cancer Treatment,” in a Time magazine cover story. When even the White House is awash in pink, it’s extremely tempting to put blinders on — especially for Jewish women like me. Ashkenazi Jews face a 1 in 40 chance of having a BRCA mutation, which increases their lifetime risk of developing breast and/or ovarian cancer up to 84 percent. (Overall, one in 400 women are BRCA-positive.)

These searing facts were published recently in Elizabeth Wurtzel’s gut-wrenching New York Times Op-Ed, “The Breast Cancer Gene and Me.” Wurtzel tackled her own bilateral mastectomy and relentless chemo regime with the same visceral directness that the author of “Bitch Rules” and “Prozac Nation” built her reputation on. But it was the writer’s conclusion that, for me, was a wake-up call: “All Ashkenazi Jewish women should have the BRCA test,” she wrote. In the Times’ print edition, that sentence was pulled out with the words “It’s simple.”

In reality, what to do about BRCA screenings is far from black and white.

Confused and concerned — Should I get the BRCA test? Is prophylactic surgery going to be on the table? — I spent much of the past week talking to scientists, doctors and geneticists about the BRCA mutation, why it’s controversial and what Jewish women should consider when thinking about genetic testing.

The recent controversy kicked in last December at the San Antonio Breast Cancer Symposium, where Dr. Mary-Claire King — the geneticist who discovered the BRCA1 gene — told her professional community that all women 30 and over should be tested for BRCA mutation.

“To identify a woman as a carrier only after she develops cancer is a failure of cancer prevention,” said King, a professor at the University of Washington School of Medicine.

Saying all women should be tested — not just those considered at high risk — was a big deviation from current medical practice. And it comes at a time when BRCA testing is far more feasible for more women for two reasons.

First, the Affordable Care Act changed the equation: It mandates coverage for mammograms and other prevention measures (including genetic testing and counseling) for many more women. Second, a 2013 U.S. Supreme Court ruling helped make the test far more affordable — since then, the price has dropped from about $4,000 to about $250.

Still, most of the doctors I spoke with don’t think women should go out and buy a DIY test, just because they can.

In December 2013, the U.S. Preventative Services Task Force — an independent panel of experts appointed by the Department of Health and Human Services — issued this recommendation: For women with family medical history of certain cancers, “talk with a health care professional to learn if their history might put them at risk for carrying a BRCA mutation. Women who screen positive should receive genetic counseling and, if indicated after counseling, BRCA testing.”

For other women, it warned against testing: “For the vast majority of American women (90 percent) who do not have a family history associated with an increased risk for the inherited mutations, the Task Force continues to recommend against genetic counseling and testing.”

Considering King’s recent advice, however, I asked her: What should Jewish women bear in mind?

The good news, she added, is that “breast and ovarian cancer risk can be reduced from very high to very low for young women with mutations.” While “the interventions [like preventative surgery] are not pretty … they work.” (For women who have the mutation, a preventative double mastectomy decreases the risk of breast cancer by 95 percent.)

King sang the praises of genetic counseling, especially for young women with a family history of BRCA mutations.

Elana Silber, the executive director of Sharsheret, the national Jewish breast cancer organization, described genetic counseling this way: It “provides a personalized risk assessment and discussion of both medical and psychosocial implications of genetic testing.” A trained professional can guide you through the process, she added, and walk you through risk and prevention techniques.

The value of genetic counseling is one thing that all the experts seem to agree on, including Dr. Tamar Peretz, director of Hadassah Medical Organization’s Sharett Institute of Oncology in Jerusalem. She describes herself as having a “unique vantage point of probably treating more Ashkenazi Jewish patients than any other physician in the world.”

But when it comes to universal testing for BRCA mutations, Peretz “strongly disagrees” with testing all women; she also opposes testing all Ashkenazi women. Why? “Testing must be part of good genetic counseling in which the question of the consequences to the woman and her family are taken into consideration,” she said. “Unlike a disease that belongs to a woman alone, the discovery that a woman is a BRCA gene carrier means there is a 50 percent chance that her first-degree relatives are carriers, too.”

Peretz is concerned that “informed decisions about the impact of testing” are too often overlooked. When a woman discovers that she is BRCA-positive, for example, “she has to make the difficult decision of whether to tell her family [and her potential partner],” often an “additional burden” on top of a new cancer diagnosis.

But Dr. Marisa Weiss, the president and founder of Breastcancer.org, thinks “all Jewish women should seriously consider genetic testing.” “Genetic information used to be scary,” Weiss, a breast cancer survivor who is Jewish, told me. “Now it can be powerful in helping you take steps to have a full life. We are learning that all conditions, as well as diseases, may have some genetic bases to them.”

In her opinion, knowing if you are BRCA positive “sooner rather than later gives you powerful steps for prevention and could help you save your life.” Indeed, in the United States, the odds for surviving breast cancer have greatly improved. The five-year survival rate for breast cancer has jumped from 75.2 percent in 1975 to 91 percent in 2007 in part because of new tools to detect and treat cancer.

And surgical options have improved, too. Today’s mastectomies are generally “nipple-sparing and we do the reconstruction at the same time,” said Dr. Alison Estabrook, chief of the Comprehensive Breast Center at Mount Sinai-Roosevelt Hospital in New York City. Plus, young BRCA-positive women who want children, she added, should “go ahead and have children. We recommend screening starting at age 25 with MRIs — then they go on with their lives, get married, then around age 40, we recommend having their ovaries out if they’ve had children.”

Estabrook said that King’s recommendation for universal testing is important because of the attention she is bringing to family histories — something especially significant as many “Ashkenazi women do not have complete family histories.”

Her concern is that if only people who are considered high-risk get tested, women who don’t know their family histories – including on their fathers’ sides – won’t know if they are high-risk and may fall through the cracks of current screening practices. Healthy habits are crucial, too.

“Only up to 10 percent of breast cancer cases are due to a genetic mutation; 90 percent are due to how you lead your life,” Weiss said. That means “exercising three to four times a week, eating well, maintaining a healthy weight, limiting alcohol use, not smoking, getting a good night’s sleep.” I’m also paying attention to the conversations around mammograms. Right now, the U.S. Preventative Services Task Force recommends that women 40 and older get regular mammograms. But in new draft recommendations, the task force suggests upping the age to 50.

Dr. Michael LeFevre, a task force member and immediate past chair, told me that “the decision to screen for women in their 40s should be an individual one and made in consultation between women and their doctors.”

While concerns abound about the overuse of mammography, not everyone is pleased by the new recommendations. One concern is that they will lead to decreased access to screenings, including insurance coverage for women in their 40s.

Among them is U.S. Rep. Debbie Wasserman Schultz, D-Fla., who, in April wrote an Op-Ed in the Washington Post urging others to join her in opposing this change to the guidelines.

“As a breast cancer survivor and an Ashkenazi Jewish woman who has a significantly higher genetic risk of breast cancer,” she told me via email, “there is no more personal issue for me.”

The congresswoman was 41 when she discovered a lump in her breast. Her fear is the new recommendations, if finalized, “would jeopardize mammogram coverage for those who need it.”

I’m someone who loves asking questions, so I find it reassuring that the smartest thing women can do is to seek answers: Talk to our families (crucially, on both sides) about their medical histories, ask ourselves if there are lifestyle changes we need to make and talk to our doctors about breast cancer risks.

As for me, I’ll be stepping up the self-care. It’s been more than five years since I’ve had a cigarette, but that’s not enough. I’m changing the way I think about exercise, for one. As the parent of a young child, exercise can feel like a luxury — a tertiary concern after work, family and everything else. But it’s not; it’s one way to help ensure we stay healthy, along with being disciplined enough to get a full night’s sleep.

And yes, I’ve talked to my doctor about my personal medical history, and she and I agreed that I would start having mammograms in my late 30s.

Since I started this article, I dug up the referral she gave me — it had expired. So I got a new one, and now I have an appointment. And I made a doctor’s appointment, too, during which I’ll inquire about seeing a genetic counselor.

I’d rather be a previvor than a survivor. And a survivor in any form then not live to see my daughter grow up.