Revisiting the Sheva Berakhot, Or Seven Blessings on Marriage 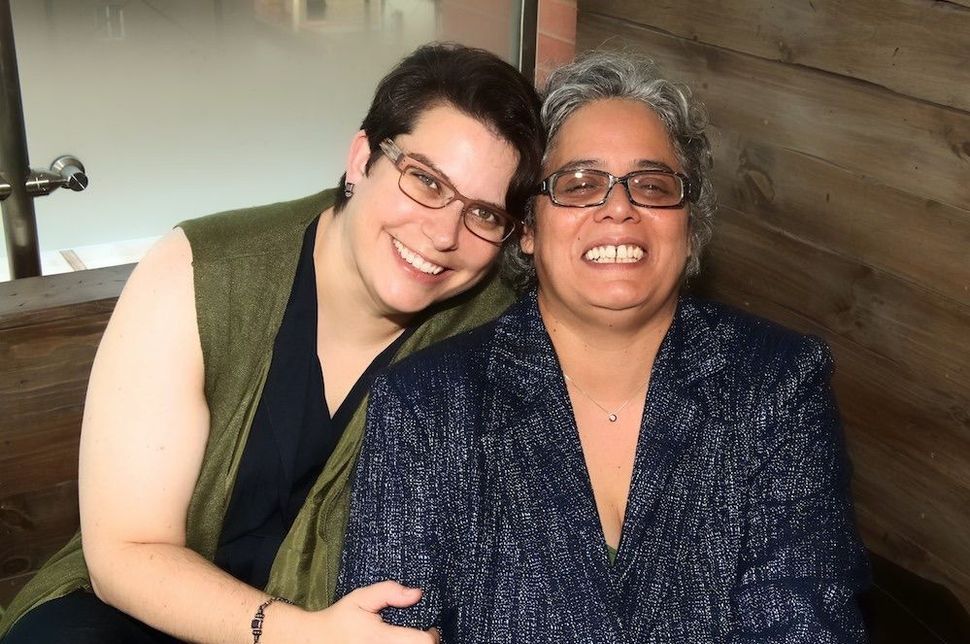 1. Blessed art Thou, O L-rd our G-d, King of the universe who hast created the fruit of the vine.

In my twenties, when weddings should have been ordinary, I avoided them. Back in the 1990s, marriage, to me, was an institution of derision, exclusive of queers and anachronistic for women. Weddings were an artifice, covering the dark underbelly of oppression; they were a gateway to tyrannical marriages. The few I attended were those of close friends, commitments I could not escape. Although my friends married without abandon, I did not attend their festivities. As my passel of six cousins married in turn, I blew off their weddings; I steered clear of acquaintances contemplating marriage. Now, safely in my forties, I have never been a bridesmaid. It is clear: I never will be. The first blessing in a Jewish wedding ceremony is ordinary, familiar; the same words intoned at every Sabbath dinner, during every holiday celebration: Blessed art Thou, our L-ord, Maker of the universe who has created the fruit of the vine.

2. Blessed art Thou, O Lord our God, King of the universe, who has created all things for His glory.

When I came out in the late 1980s, gay men and lesbians were reviled. We were considered disease-spreading perverts. I actually want to forget my early experiences as a young woman of seeing gay and lesbian people because those images are of fear and shame and how we carried both in our bodies, in our daily lives. To recall those years is to experience them again. When one has lived openly and in the sun, the desire to crawl back into a cave, fearful and hiding, is no more. Yet, I liked the defiance of those years. I liked the bravado required to stand in front of a group of people and say, I am a lesbian, and to expect—or demand—acknowledgement of that fact. But it was exhausting.

Now I tell a wonderful story about meeting my beloved and falling in love, and it is true, but what is also true, what we do not speak of, is what it took to create enough love for self and love for others to express lesbian love publicly. In a world where queers were not seen as part of divine glory, to carve out space and say, yes we are, was an act of extraordinary resistance. It required strength and conviction in the face of constant doubts, unkind words, and ruthless dismissals.

Remember, this was a time when the majority of people regarded gay men and lesbian as sick perverts. When people did not see the love between two women or two men as equal to the love between heterosexual people. The idea that lesbian love is equal to heterosexual love is an idea activists created. And what a creation it is! The creation of this idea and its slow embrace by the majority of the American people affirms the second blessing on marriage: Blessed art Thou, Maker of the universe who has created all things for divine glory.

3. Blessed art Thou, O Lord our God, King of the universe, creator of man.

While I have never been a bridesmaid, I have been a bride. In the early days of marriage equality, when Mayor Gavin Newsom married same-sex couples in February 2004, I said to my beloved, Let’s cash in our frequent flyer miles, fly to San Francisco and get hitched. She replied, Seriously, this is a legal quagmire.

It was; the marriages of over 2,000 couples eventually dissolved into nearly a decade of drama before the great state of California would recognize the marriages of homosexual couples. That pithy exchange launched years of our dithering about marriage. When the District of Columbia started solemnizing marriages, some in our families thought we would be wed. I maintained that a municipality without a federal vote would not be the place to formalize our union.

Finally, when the New York legislature authorized marriage for lesbians and gays, we decided: yes, now is the time. We wed on our fifteenth anniversary. So yes, I have been a bride, but there was no blushing, just a blessing: Blessed art Thou, Maker of the universe, creator of humans. I continually marvel at the things we make, at the things we create, in this universe.

The morning after our wedding, we woke feeling both no more married than the day before and profoundly transformed. For a few days, we lived in this heightened state. We knew objectively that little had changed. We still paid additional taxes for the health insurance that I received as a benefit of my beloved’s job; neither our state nor the federal government would recognize our marriage for tax purposes. When we traveled to Michigan to visit family, we still risked being separated if either were hospitalized. These material realities still weighed on our psyches, but the state of New York issued us a license; the rabbi signed it with a flourish. The fabric of our lives had changed, even if the garment was not yet complete.

5. May she who was barren be exceedingly glad and rejoice when her children are united in her midst in joy. Blessed art Thou, O Lord, who makes Zion joyful through her children.

I did not think anything could eclipse the transformation of our own wedding. Then came the Obergefell decision. I desperately wanted to be home in Maryland when the Supreme Court delivered its decision, but I had a week-long research trip planned to California in late June. I hoped the decision would be saved for one of the last days of the session, though I knew activists hoped it would come down the Friday before the big pride celebrations in New York and San Francisco. As luck would have it, their hopes were fulfilled. Mine dashed. Friday, June 26th was the last day of my research. As the celebrations erupted, I was up in the air flying home. All weekend, the beloved and I watched the coverage on television, on the internet. For the first time in our lives, every state in the union recognized our marriage.

Like many public events, I wanted to experience the celebration in community: outside the Supreme Court, on Pennsylvania Avenue near the rainbow-illuminated White House. I was part of neither moment. Perhaps I prescribed my community too small: the celebration was everywhere with me that day—where I conducted my research, at the car rental return, during airport security, in the eyes of the woman who sold me a sandwich, in the spirit of my fellow airline passengers. Everywhere I went, I felt celebrated. How much had changed in a few decades.

The decision churned up many emotions, not just joy and jubiliation. The beloved and I actually spent a good part of the weekend quietly weeping, each remembering people who would have loved the decision and its subsequent celebrations, but did not make it to this day to join us. We cried. We dreamed these friends, our comrades in struggle who did not see this one victory point. One of the blessings of marriage is the presence of sadness with rejoicing, the mixture, the reconciliation between the two. May she who was without be exceeding glad and rejoice when her people are united in her midst in joy. Blessed art Thou, who makes the world joyful through community.

6. O make these beloved companions greatly rejoice even as Thou didst rejoice Thy creation in the Garden of Eden as of old. Blessed art Thou, O Lord, who makest bridegroom and bride to rejoice.

On the day we wed, we made love. I could even say: we had sex on our wedding day. The beloved insisted on it.

Last weekend the beloved and I attended a wedding for the first time since the Obergefell decision. It was exactly the type of wedding that, prior to marriage equality, I might have resented. I could imagine myself asking: how can we recognize this new relationship between a couple with no history when my own relationship is ignored? Yet, this question is no longer true. I must abandon the old resentments, the ancient refusals.

So I embraced the celebration and bandied about the word “my wife” and “at our wedding” with abandon. No one was shocked; no one objected. I felt different, too, attending a wedding with marriage equality now the law of the land. More equal, perhaps; even, more worthy. I still remember the shame and fear, but they occupy a smaller space in my psyche. With joy and pride, I see new generations who may never have those feelings be a significant part of their lives.

Legally married for over four years now, and partnered for nineteen, I am coming to understand marriage differently. Seven blessings are only a beginning, but we all start somewhere and now all couples can start with the words, Blessed art Thou, who has created joy and gladness, two lovers together, mirth and exultation, pleasure and delight, love, companionship, peace and fellowship. Soon may there be heard in the cities around the land, in the streets of the world, the voice of joy and gladness, the voice of the lovers, the voices of the companions from their canopies, and of young people from their feasts of song. Blessed art Thou, who makes the lovers rejoice together.

Julie R. Enszer is the author of three collections of poetry and is editor of Milk & Honey: A Celebration of Jewish Lesbian Poetry.

Revisiting the Sheva Berakhot, Or Seven Blessings on Marriage