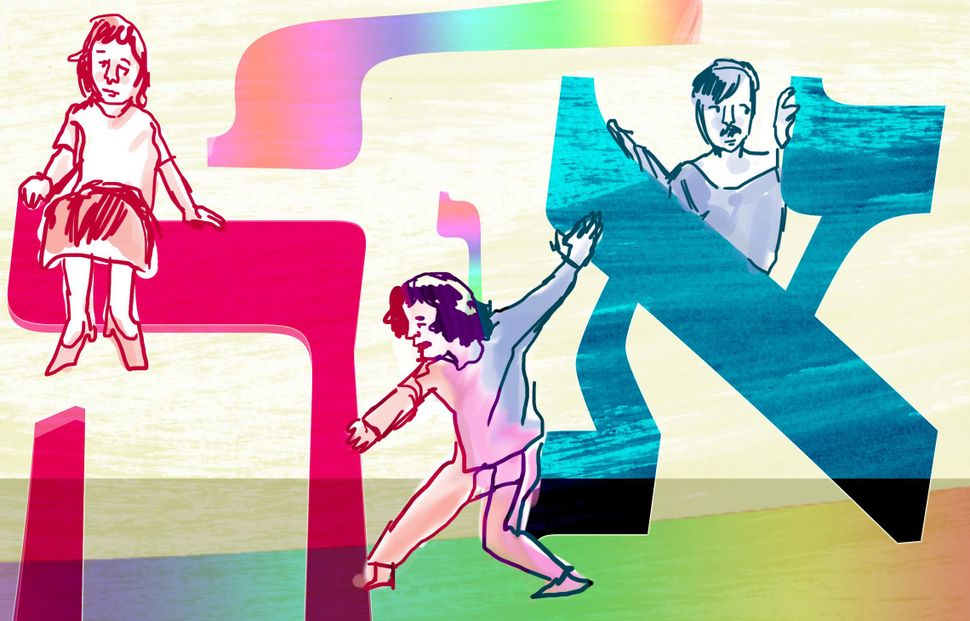 Beneath the rocky alps and the bright blue sky in Salzburg, Austria this summer, fellows at the Eighteen:22 conference for Jewish LGBTQ leaders sat around at the Schloss Leopolskron, the site where “The Sound of Music” was filmed, addressing each other by their preferred gender pronouns PGP, like he, she, and the non-binary, they and ze, discussing ways to break down the gender binary that so strongly guides modern society.

Sarah Weil, the founder of Jerusalem’s Women’s Gathering, a safe and social space for lesbians in the holy city, was one of these fellows.

While she appreciates the sensitivities that take place in English, in Hebrew, her national language, gender sensitivities are significantly more complicated.

Hebrew, at its core, is a gendered language. Every word in the ancient language is categorized as zachar, male, or nekevah, female. Every noun from furniture to food is either a he or a she, and every adjective and verb has a male and female form. ​“Hebrew is one of the most sex-manic languages out there,” said Orit Bershtling, a Ph.D. candidate at Haifa University specializing in transgender identity. It “creates clear distinctions based on gender in most grammatical forms and obligatorily marks the gender of its speaker,” she added, and is “a language shaped by the restrictive system of gender,” she said.

​This presents issues for the LGBTQ community that is trying to fight inherent gender bias.

​”Many of us feel gender coerced by language itself, squished into small boxes,” Weil explained. “Because everything has to match up in terms of sex, when that matching is disrupted it creates a particularly powerful dissonance that shines light on the male female binary of the language, and the culture.”

According to section five of the United Nations Human Rights Council’s “Born Equal and Free,” all individuals are entitled to “freedom of thought and expression; this rights includes freedom to hold opinions without interference…” Many interpret this as a basis by which LGBTQ individuals can self-identify however they’d like. What comes into question though, is that if they can, too, regulate the language with which they are addressed.

In English, for example, the concept of PGPs exist, where people can choose how people wish to identify.

But Hebrew isn’t that liberal. In Hebrew, even ‘you’ has a female or male form. So LGBTQ activists and allies have taken steps to neutralize that by combining suffixes and creating new hybrid words altogether. Take the Hebrew word ‘you,’ for example. Instead of accepting the gendered form of the word, activists combine the male form, ‘atem,’ and the female form, ‘aten,’ to create a gender neutral word, ‘atemen,’ explained Avigayil Heimowitz, the marketing director at Ein Prat, a pluralistic Jewish learning program in Israel.

In fact, LGBT activists in Spanish speaking countries are attempting to radically revolutionizing language, explained Gustavo Michanie, the president of Jewish Argentine Gays (JAG) and an Eighteen:22 fellow. For example, he explained, ‘todos,’ which is the male derivative of the word everyone, and ‘todas,’ which is the female derivative of everyone, are now being combined into one word, ‘todøs,’ as a way to connote a gender inclusive way to say everyone.

Russia, a country that only decriminalized homosexuality in 1993, is even more extreme. “Russian society and language is very based on gender roles,” explained Trevor Allen, a translator who has worked with Amnesty International and speaks English, Italian, Russian and Spanish. “The word for a married woman in Russian literally means ‘behind my husband,’” he explained, “so it makes it really hard to talk about the idea, of, say, gay marriage, when the language doesn’t exist in Russia because it is so based on hetero-normative values.” ​ Some LGBTQ activists see language – from Hebrew to Russian and everything in between – as an oppressive mechanism that needs to be totally restructured to promote sexual equality.

As translator Allen described, because homosexuality only became a public topic of conversation in Tel Aviv and in Russia, for example, two decades ago, people haven’t had time to develop language to discuss homosexuality or sexual fluidity. “All of the terms they use are of foreign origin. Gay in Russian is ‘gay’ or the same word for ‘light blue.’ Lesbian is ‘lesbian’ or ‘pink…or they use the English words’” And it’s similar in Hebrew: the word for gay is “homo,” and lesbian is “lesbian.” The ancient language, the language of the Bible, of Moses, just hasn’t gotten with the times.

And Bershtling acknowledges that: “It’s a problem,” she said. “You can’t fix that…There’s no doubt language creates gender division,” she added. “Not everything is perfect.” ​ But she has a different spin on the evolution of language and LGBTQ issues. “Gender queer play with language and I think it’s beautiful,” she said. “Language has many rules. Language can be used to undermine gender roles,” as activists say. “It can be used to validate or destroy- it has the power to do both. Like gender queer, it can be this way or that way.”

​People on the street, not just academics hold this view as well. “As the spectrum of gender expression expands, so to the corresponding meaning of sex,” explained Weil. “Because the language is gendered it actually has a greater potential for contributing to the expansion and diversification of our notions of gender and sex.

​In Hebrew, she explained, it’s a lot easier to validate a transgender person’s identity. “If I succeed to transition to the gender I wish to be, language confirms and reconfirms that,” she said.

“Something about the simple act of talking validates their identity,” she added. “There’s no way around it.”