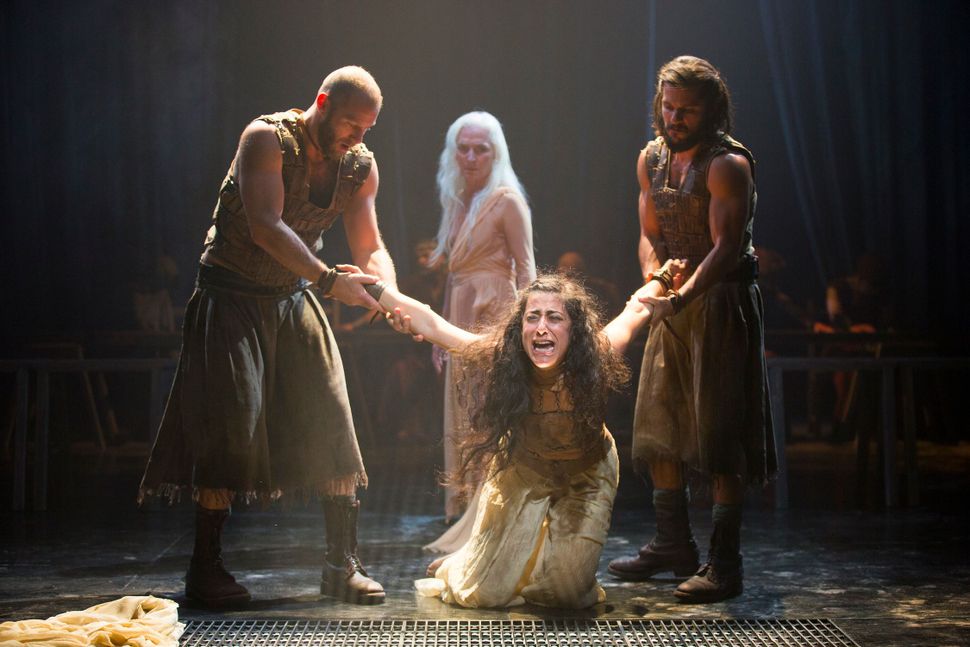 Water runs over the curves of Salomé’s bare skin. Alone together in an underground prison, John the Baptist baptizes the Judean princess.

Instruct someone to imagine Salomé in the nude, and this is probably not the scene that comes to mind. But South African playwright and director Yaël Farber’s take on the biblical story doesn’t follow the typical version of events.“This adaptation of “Salomé” is the redefining of a story that we think we know, from the Christian scriptures and from Oscar Wilde’s stage play and Richard Strauss’ opera, and many other versions of her story,” says Farber. “It is about putting a woman at the center of her own narrative once again and taking political agency in a situation [where] she has been described as a supporter [in] her own story.”

In the world premiere of “Salomé” at Washington, D.C.’s Shakespeare Theatre Company, audiences meet a woman who knows exactly what she’s doing. This is not the tale of John the Baptist’s demise at the hands of a woman scorned, or of a naïve girl following her mother’s orders. Salomé is smart, but not conniving, beautiful but not hyper-sexualized, and powerful, but not vindictive.

Farber wanted to break from the age-old tradition of relegating women to the periphery of their own narratives. “It’s always about a man’s story being told and that she is somehow the trigger or a part of some kind of inciting incident, usually to do with her sexuality, that triggers the main protagonist to take action.”

Salomé is not actually named in the Bible. The Books of Matthew and Mark refer to her only as “the daughter of Herodias.” In the scriptures, she “pleased” Herod and his guests by dancing at the king’s birthday banquet. Promised any reward her heart desires, Salomé runs to her mother, who urges her to make the bloody request.

It was a history-altering event, Farber notes. “The woman who we call Salomé, her act in bringing about the death of Iokanaan opened up the possibility for insurrection, simply in the fact that a dead martyr is much more dangerous than a live martyr,” she says.

Struck by how impotent Salomé is rendered in the biblical retelling, Farber decided to give her a new personality and motivation. When her Salomé (Nadine Malouf) demands the head of John the Baptist, or Iokanaan (Ramzi Choukair), it is a political act intended to incite the people to rise up. The decision is bigger than Herod’s stepdaughter, and she doesn’t take it lightly.

But that does not mean Farber is looking for a leak proof explanation of the story. The historical inaccuracy or plausibility of this girl power version is not her concern.

“It’s a revisionist version,” she says, “but I’m not sure that anything isn’t a revisionist version. When historical events have been recorded 300 years, at least, after the events have occurred, we’re talking revisionist on some level.” Farber took the opportunity to cast a well-known story in a different light. She created a beautiful play that is well supported by stunning and powerful visuals, including the female figure.

Falling from above, water and sand tie characters to the earth. Fabric envelops both the scene and Salomé , perhaps hinting at her “Dance of Seven Veils.” Cast members hoist a long ladder up, angling it and creating the illusion that Salomé is descending into a subterraneous dungeon.

While the arresting visual metaphors, designed by Susan Hilferty, are one of the strongest elements of the play, other symbols fall flat. One element is particularly jarring.

Most of the play is performed in English, but Iokanaan speaks only Arabic. In truth, John the Baptist would have spoken neither. The choice sets Iokanaan apart as an outsider, but nestled against an already modern lingual backdrop, the use of Arabic stands out, and not in a good way.

“My original hope was that we could include Aramaic in the text,” Farber says. Confronted with a “massive time constraint,” she thought better of it. “But it also seemed a very beautiful way to just bring in the polyglot of the culture that was Jerusalem, and in fact, there are several cast members who speak French, and I would love to in future versions include those languages too.”

Breaking free from linguistic reality creates a filter, Farber says, that allows people to better understand and relate to their own stories. While a lovely sentiment, the intention seems half-baked. Utilizing a tongue familiar to contemporary ears is a distracting choice that has been used more successfully in Farber’s past.

“I’ve often worked with people in their mother tongue, in their first language, and I think there’s a tremendous beauty and power in that,” she says.

In “SeZaR,” Farber’s African adaptation of “Julius Caesar,” and “Mies Julie,” her contemporary South African take on August Strindberg’s Miss Julie, encouraging actors to speak in their native tongue makes sense. It does not work here. Until Farber’s concept of using modern language to help contemporary audiences empathize with John the Baptist is further flushed out, the choice seems lazy and weakens an otherwise mesmerizing production.

Like the post-apartheid Mies Julie, this production grants a voice to the oppressed. “I’m very interested always in just moving toward the silences and trying to speak for them and I think theater has a very powerful socio-political mandate to it,” says Farber.

Whether Salomé’s silence is shattered in English, Arabic or Aramaic, Farber doesn’t seem to care. In her latest play, language is an accessory to a very specific purpose.

“I felt an accountability to open up the question quite simply for the audience or the witnesses to say, ‘why do we never question how silent, largely, the women are inside classic script, ancient scriptures, modern day Hollywood,” she says. “Why are we consistently relegated to the periphery of the story, particularly when you look at a figure as powerful as this young woman who changed the events of the world?”