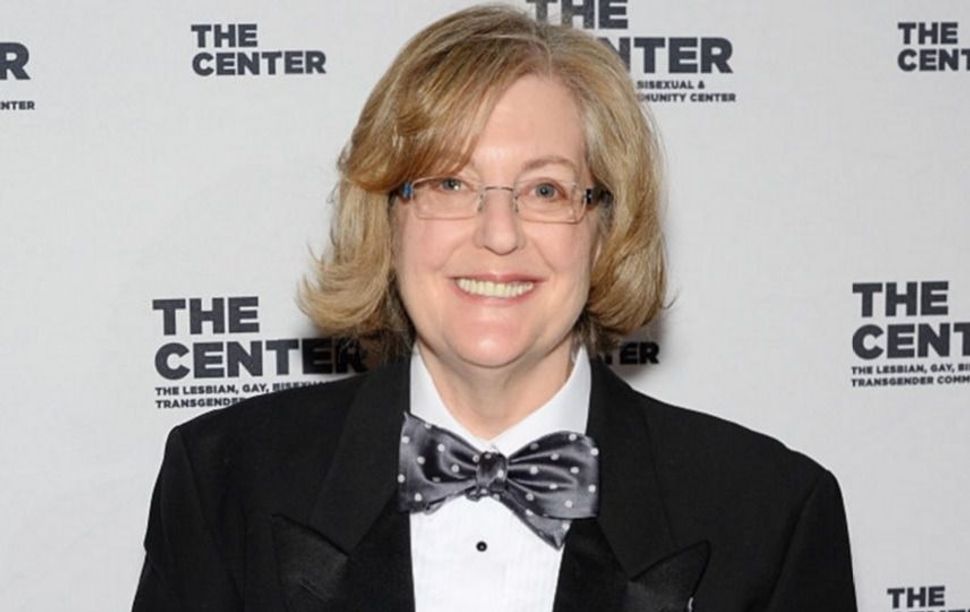 It took all of five seconds for the former executive producer of the Late Show with David Letterman to get the hundreds gathered to honor her rolling in the aisles with laughter.

“I’m Barbara Gaines and welcome to my Bat Mitzvah,” she said. “I don’t [know] what’s stranger…the fact that I’m wearing my father’s tuxedo or the fact that there’s lip gloss in my pocket.”

Gaines, 58, was lauded Saturday evening with the Trailblazer Award at the Women’s Event 18 for her work in the LGBT community.

This is the year I lost my job but my Mets won the World Series. Wait, what? No!

She said she was surprised when told she had been selected and wrote the night’s organizer:“You really must be at the bottom of the lesbian barrel.”

“She didn’t hesitate to return my email right away to say ‘We’re not scraping the bottom of the lesbian barrel — we’re at the top of the lesbian heap.’”

“I didn’t believe her but after being married 24 years i am happy to be in any part in any lesbian heap — top, bottom, middle, whatever!”

The evening was put together by New York’s Lesbian, Gay, Bisexual and Transgender Community Center, the nation’s largest.

Gaines, 58, is a board member of New York’s Congregation Beit Simchat Torah (CBST) and married to Aari Blake Ludvigsen; they have a son, Simon Michael Ludvigsen Gaines.

She became Letterman’s executive producer in May 2000, two decades after she started as a production assistant on “The David Letterman Show,” the funnyman’s NBC morning program. She worked on all 1,810 “Late Night” broadcasts on NBC and all 2,600-plus episodes of the “Late Show” on CBS.

Gaines said her old boss was always supportive and even took a humorous dig at the 2009 sex scandal that rocked the show.

“Have I changed any lives?” she asked. “I don’t know…maybe one person…a couple of interns.”

The crowd inside New York’s swanky Capitale ate it up.

There was a special tribute to another Jewish trailblazer during the event: marriage quality pioneer Edith Windsor, 86, who was at the top of The Forward 50 list in 2013.

Windsor is the Jewish lesbian activist whose Supreme Court battle successfully overturned the Defense of Marriage Act in 2013.

The case brought by Windsor — demanding the same federal tax benefits after her life partner died Thea Spyer — is credited with laying the groundwork for a case brought by the 49-year-old Jim Obergefell and several other plaintiffs.

Singer Janelle Monae got an Equality Award “acknowledging her immense talent, dedication to artistic expression and commitment to achieving equality for the LGBT community.”