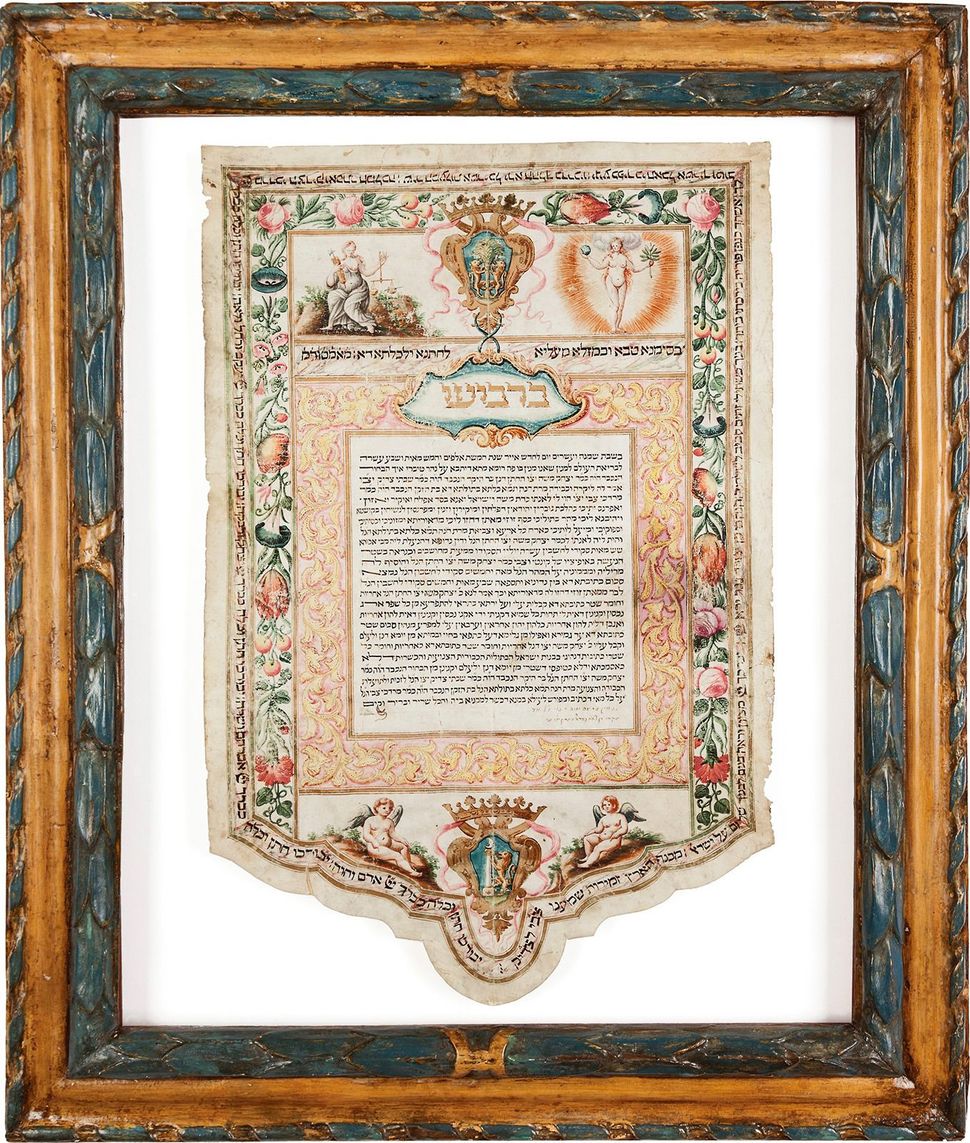 That naked bodies existed in the mid-18th century goes without saying. In a world where even Vogue finds its way to discussing tznius, the biblically-inspired modesty that has tended to be applied overwhelmingly to women’s attire, however, some may be surprised to learn that naked female bodies surface in illustrations adorning margins of religious Jewish documents.

A Hebrew and Aramaic marriage certificate, or ketubah, from 1757 Rome, which Kestenbaum & Company sold on Nov. 19 for $60,000, has the typical elements one would expect of a Jewish marriage contract: floral embellishments, lions of Judah, and the appropriate texts. But, notes the Kestenbaum catalog, there are also “seemingly incongruous” design elements as well.

Atop the document, the artist-scribe — Shmuel Manoach, son of Shabtai Isaac of Fiano — drew the (secular) personifications of justice and peace. Justice, blindfolded per convention, sits on a rock and holds scales in her left hand, and what appears to be an axe (where one would typically expect a sword) in her right hand. Her white gown has dropped to reveal her left breast.

The completely-nude companion figure, on the right side of the page, holds an olive branch in her left hand, symbolizing “universal peace,” as the dove returned to Noah bearing such a branch, according to the catalog. “This symbolism for peace is also used in both Greek and Roman mythology.”

In her right hand, the figure carries an orb. As the auction catalog notes, the figure might not be peace, but either a symbol of the particular marriage that the document is celebrating, or, judging from the white lily above her, a stand-in for purity (such is the role it plays in Christian art) or for motherhood (as it symbolizes in Greek art).

“Why would these Allegories be chosen for a Jewish bride and groom — and without the inclusion of the predictable allegories of love, marriage, and family?” the catalog asks. The speculative answer is that it might relate to the names of those getting married: Isaac Moses, son of Shabtai Zadik, and Hannah, daughter of Mordechai Zvi.

The biblical Moses, notes the catalog, exacted justice on the Egyptians, Midianites, and others, and the biblical Hannah was barren until God finally heard her prayers and she gave birth to a baby that would become the prophet Samuel.

Whatever allegory the second figure refers to, she’s indisputably nude, as are two putti seated at the bottom of the ketubah. That shouldn’t be entirely surprising.

Consider a 1690 French ketubah, in the collection of Yale University’s Beinecke Rare Book and Manuscript Library, which shows dozens of nude figures, including Adam and Eve sprawled out on either side of serpent-entwined Tree of Knowledge.

Or a ketubah from 1805 central Italy at the Library of Congress, which contains illustrations of two nudes flanking Moses bearing the 10 Commandments. Another two nudes point at the introductory text: “With congratulations and good luck to the groom, bride, and all of Israel…”

Another example: a 1756 Italian ketubah at New York Public Library, which depicts a nude and two semi-nude putti atop the text, which is circumscribed by the perhaps anti-Semitic symbol of two curly columns.

These three, and the document that Kestenbaum recently sold, are just a few of countless examples of illustrations of nude and semi-nude women adorning religious Jewish documents. (I didn’t note it in this piece, but there’s at least one female nude depicted on a tombstone in Prague’s Old Jewish Cemetery.)

Art history, even when it collides with historic Jewish ritual, is perhaps unlikely to have much impact on the nuts-and-bolts of today’s rabbinic reactions to nude illustrations — especially in the Orthodox community — but works like the one auctioned at Kestenbaum are part of a longstanding, and undeniable, Jewish tradition.