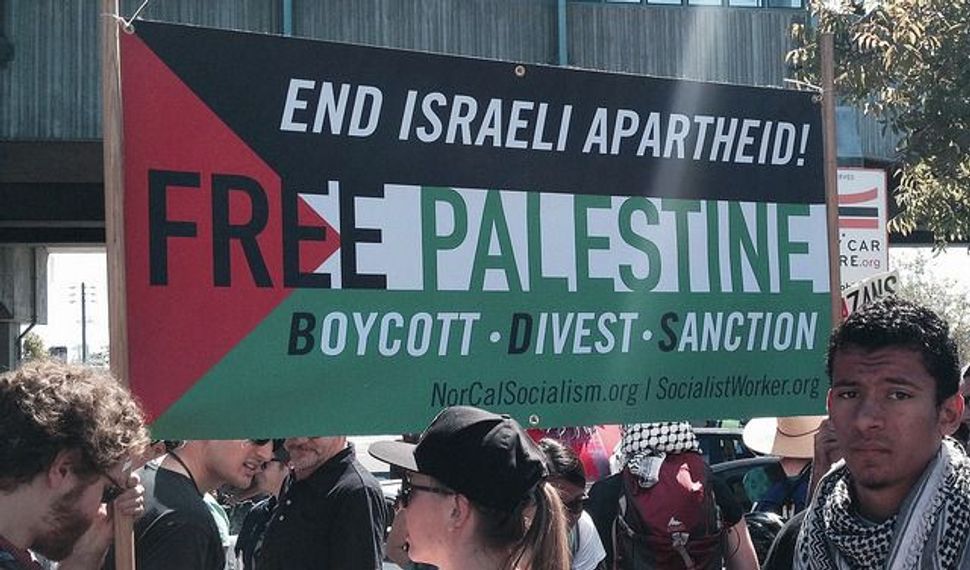 The results of the vote on the Boycott Divestment and Sanctions (BDS) resolution put forth by the National Women’s Studies Association (NWSA) came over email this past Friday. Of those voting, 88.4 percent or 653 people approved the BDS resolution; 86 opposed. Thirty five percent of the NWSA membership voted. As a longtime member of NWSA, who has observed the organizing strategies that led to the vote, I knew its passage was a foregone conclusion.

The NWSA resolution calls for the “Boycott, Divestment and Sanctions” of economic, military and cultural entities and projects sponsored by the State of Israel. The leadership of the NWSA (without consultation with the association’s Jewish Caucus) sponsored official sessions in which speakers presented only one perspective in the BDS debate. These include a 2014 plenary on Israel/Palestine in which no Israeli was asked to speak and after which attendees who had heard a litany of remarks against Israel were asked to stand in support of “freedom and justice for/in Palestine.”

I have long been involved in the NWSA, and for a time served as chair of its Jewish Caucus. My commitment to working as a Jewish feminist includes directing the Women’s Studies program and co-directing the Center for Jewish Culture at University of Massachusetts Dartmouth where I worked for twenty-five years before joining the Brandeis Women’s Studies Research Center. While I can convey my progressive politics in Jewish groups, increasingly, I do not feel I can express my Jewish voice within the progressive community, including NWSA which has been one of my homes for many years. With just a few gaps, I have returned to conference after conference since the late 1970s because I want to engage in “difficult dialogues,”  the theme of not one but two recent conferences.

Since the NWSA had not offered occasions to present a legitimate discussion on pros and cons of the resolution, I felt it was important for me to accept an opportunity to speak at this year’s conference for five minutes on a BDS roundtable sponsored by the Jewish Caucus entitled “‘Two Jews, Three Opinions’: A Critical Query of the Boycott/Divestment/Sanction Movement Against the Israeli Occupation” which offered a singular opportunity to present divergent viewpoints on the resolution. One other woman spoke against the resolution and two spoke in favor.

I used my time to demonstrate how the “Frequently Asked Questions” appended to the resolution and intended to allay concerns about its content instead provided the very reasons that it should be rejected.

The FAQ responding to apprehensions about whether the BDS resolution could be seen as anti-Semitic was addressed with this rejoinder: “(W)hat is really anti-Semitic is the attempt to identify all Jews with a philosophy that many find abhorrent to the traditions of social justice and universality that Judaism enshrines.” I observed that such presumptive, condescending language reprises the ancient appeal to the “good” Jew, in this case one who sides with those who see Israel as a demonic entity. The tactic of seeking out the exceptional ones in a despised group is one that has long been used to reinforce despicable racism and anti-Semitism.

I also spoke against the egregious assault on academic freedom found in the explication in the FAQs of activities that would violate the boycott. Not only would a seminar talk in partnership with or sponsored by an Israeli institution not be allowed, but even telephone conversations are subject to the boycott. “By itself, a phone conversation with an Israeli academic does not constitute a violation of the boycott. However, institutional partnership is subject to boycott; therefore we urge academics, in exercising their own academic freedom, to refuse all collaboration with complicit institutions and their official representative.”

As the conference proceeded I became aware that the content of the resolution before the organization was irrelevant to most members. In fact, almost everyone with whom I spoke had not even read the resolution. In retrospect, I realize that support for both Israelis and Palestinians to live in peace and dignity and the encouragement of exchanges that respect all those involved are not goals of this resolution.

So what did I learn? I learned what I need to keep relearning:
– The zeal with which many come to their position on BDS is often in contrast with an awareness of history or a respect for the accuracy of information brought to their advocacy.

I have more work to do to resist trying to ingratiate myself with the left. Through many years of involvement in progressive politics I have observed in myself and others the struggle to be aligned with positions taken by other left-learning colleagues. Even with the experience I have had within NWSA, I initially thought, as have other, mostly Jewish, opponents to the excessive rhetoric of  BDS resolutions in other organizations, that there could  be an “acceptable” resolution that would acknowledge the multiple dimensions of the Palestine/Israel conflict. I need to disabuse myself and discourage others from seeking affirmation from those who, in reality, do not respect me and to relinquish the idea that it makes sense to invest time in trying to gain their approval by efforts to reshape resolutions intended to delegitimize Israel.     The BDS movement directs our energy away from ways to find a peaceful solution that respects the humanity of both Israelis and Palestinians. It oversimplifies to the point of gross inaccuracies.

I described myself to the NWSA round table audience as a “progressive, feminist, pro-Israel, pro-Palestinian, pro-peace Jew.” Having a thorough, thoughtful exchange of what each of those words mean to me and others might have been the basis for a constructive dialogue on the Israeli-Palestinian conflict, but that has not occurred. Despite the passage of the BDS resolution I still want that dialogue and intend to continue to seek solutions to this struggle based upon deep reflection rather than simplistic, formulaic sound bites.

Dr. Janet Freedman is a Resident Scholar at the Brandeis University Women’s Studies Research Center, a member of the Academic Advisory Committee of the Hadassah-Brandeis Institute and the author of “Reclaiming the Feminist Vision: Consciousness Raising and Small Group Practice.”

This blog was published in partnership with Fresh Ideas from HBI of the Hadassah-Brandeis Institute.