Before Settling Down, Gaza Couples Get U.S.-Style Marriage Help 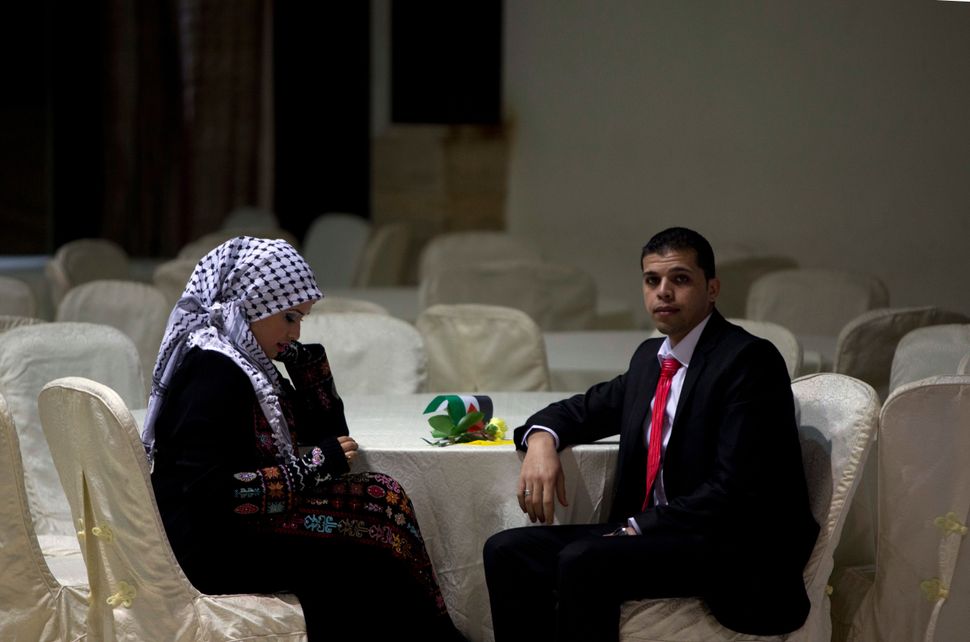 (Reuters) – Hesitant but curious, several Palestinian couples walked into a classroom in Gaza this week to attend the first marriage guidance program in the conservative, Hamas-run enclave.

The initiative, backed by three Palestinian ministries, the Islamic University and British-based charity Interpal, is designed to prepare young couples for married life, including religious, legal, medical and psychological counseling.

Courses are free, with couples offered gifts worth $60 to encourage them to attend the 15-hour course. Some classes are mixed and some are held with the partners separated.

“So far it is a trial course of 90 brides and grooms,” said Hassan Al-Jojo, head of the Higher Religious Judicial Council, one of the program’s sponsors. “We want to encourage couples to come because there is still hesitation.”

Marriage is a big business in Gaza, with 20,000 unions last year, 5,000 more than in 2014, when a 50-day war between Israel and Hamas militants interrupted plans. Much of the rubble and destruction of that conflict remains.’

Since more than half of Gaza’s 1.95 million people are aged under 25, the marriage figures are only likely to grow. Most Gazans cannot easily leave the densely-populated coastal territory, which is blockaded by Israel and Egypt.

But even if marriage is popular, it does not mean it is always a success, particularly with many unions arranged. While U.S.-style counseling feels awkward for many Muslims, the promoters hope it will make marriages stronger.

There were 10 couples in Tuesday’s class, with brides being taught about their rights and duties under Islam and the men receiving advice from a psychiatrist about how to open up and maintain a smile in the face of hardship.

“A wife should understand that life sometimes is different from the dreams she had while a single,” said Bilal Yassin, the project’s coordinator and a trainer in Islamic matters. “Using nice words like sweetheart when asking your husband to do something or bring you something would have a nice impact.”

Five of the women wore Niqab, the full Islamic covering showing only their eyes, while the others covered their heads. Since Hamas seized control of Gaza in 2007, the population has broadly adopted more conservative ways.

“I explain to them the different ways they express themselves, expressing love and hate and emotions,” said psychiatrist Jamail Tahrawi. “I call upon them to open up in all matters.” Once married, Tahrawi urges couples to discuss everything, including their sex life.

Jojo said a lack of mutual understanding, rather than poverty or hardship, was the main reason for divorce in Gaza. Divorce remains a last choice for a failed marriage and less common in comparison to neighboring Arab countries, yet the course’s backers hope their guidance will minimize it.

“We want to change the conception of the male, where some may think a woman is only a machine for breeding,” said Jojo. “The woman is a human being due appreciation and respect.”

While shy and reticent to speak about their attendance, some participants were impressed by the classes.

“I was shocked to see that only a small number of people were here,” said Hassan Meqbel, 25. “Many young people are completely ignorant about marriage, all they know is that they want to get married and then they go on with their heritage of tradition,” he said, suggesting changes were necessary.

Before Settling Down, Gaza Couples Get U.S.-Style Marriage Help