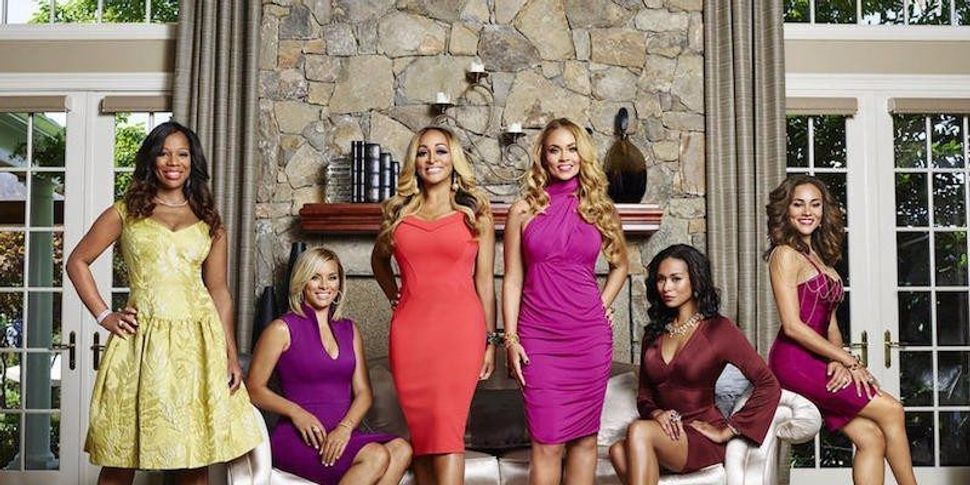 In the event that you’re not keeping track of the many permutations of Bravo’s Real Housewives franchise, the latest location is Potomac, the wealthy suburb of Washington, DC.

Like the Real Housewives of Atlanta, RHOP’s entire cast is composed of black women, but unlike Atlanta, Potomac’s population is 75.8 percent white.

The show has only been on for two weeks (it premiered on January 17), and already it’s causing a stir with its discussions of race and class – the show’s Twitter followers have latched on to the blatant nature of issues of colorism among the cast. On Sunday’s episode,the conversation expanded to include religion, Judaism specifically.

Katie Rost, model, philanthropist, and mother of three, is the lone Jewish cast member of RHOP. Rost and her mother, who is black, converted to Judaism, the religion of Katie’s father, when Katie was young. On the latest episode, Rost planned a Jewish naming ceremony for her daughters, to which she invited the other cast members. Before the ceremony, she met with a rabbi to discuss details, and the conversation was rather tense – Katie admitted to not reading Hebrew and only attending synagogue on the High Holy Days. She seemed pretty uncomfortable confessing this, calling herself a “Bad Jew.” Rabbi Mark told her he’s not fond of people classifying themselves as “Bad Jews.”

At the naming ceremony, and after it, Katie’s being black and Jewish came up when fellow cast members Gizelle Bryant and Robin Dixon questioned the ability to be both. Robin mentioned she’d known Jews growing up, and none of them were black, and Gizelle is skeptical about Katie’s Jewish identity. The women, largely a group of light skinned black women, discussed how they’re perceived as individuals, having to assert their blackness and defend it.

As a white Jewish woman who will give any program that starts with the “Real Housewives of” a much bigger shot than it should probably get, the Real Housewives of Potomac is an unsettling case.

To be fair, all the Real Housewives franchises are, as issues of race are usually ignored entirely.

On RHOP, Jews of color are getting a very specific kind of visibility, just as a certain group of women of color are discussing race in a very managed context. This is a reality show, after all, so the terms of every conversation have literally been negotiated. Let’s not fool ourselves into thinking that any issues of race, class or religion are going to be explored thoroughly – that’s not the point of the show.

Highlighting Katie’s Judaism isn’t an altruistic move aimed at promoting awareness or diversity of Jews, but like everything else in the reality TV universe, a tool to up ratings.