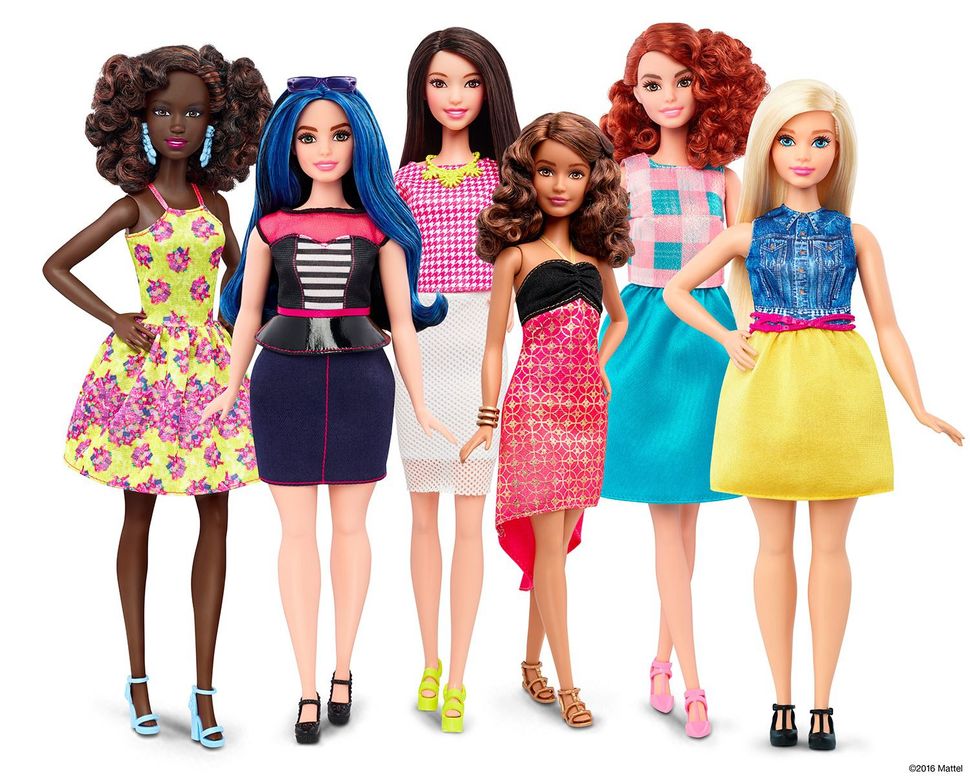 The announcement this week that Mattel is launching a new line of Barbie dolls with “realistic” bodies was greeted with cheers in the feminist community. It was a welcome response to a decades-long struggle against the ubiquitous commercial messages that an ideal woman should have a ridiculous body size and shape – unattainably thin limbs, a waist narrower than her neck, and leg-torso proportions that would make it impossible to stand up straight in real life. The fact that Mattel finally listened felt like a victory for the body-acceptance movement. Score one for Real Women.

That feeling lasted for about a split second, until I looked at the new line-up of dolls. The new so-called “diversity” is better than the original Barbie, but only by a small margin. Yes, there are dolls with wider hips, dolls with different color skin and hair, and dolls that are shorter and taller (although I cannot imagine anyone complaining that Barbie was too short; but perhaps that is my own 5’0” bias). Despite these variations, there is still something uncannily Barbie-like in the new line-up: they are all still perfect.

The new colors and proportions have not tampered the overall Barbie’s image of perfect beauty and perfect body-ness. There is not a single bulging waist or tummy, not a single unattractive bit of flab anywhere on any of the bodies, no heavy thighs, no double chins, non cellulite, no thick ankles or calves, no muffin tops, no women who “look” a little pregnant but are actually just a few months or years postpartum. The idea that wide hips constitute body-size “diversity” is actually a frightening concept; for many women, those wide hips are not a function of fitness or obesity but simply a fact of nature. When I look at this line-up, I still see only thin, beauty-obedient women.

The new Barbies are all still remarkably pretty, according to standard Western and Hollywood embedded concepts of prettiness. The faces have golden proportions, perfect skin, big long-lashed eyes, perfectly groomed and unfrizzy hair, and a general impression of perkiness. None of the Barbies has a wrinkle anywhere to designate real-life expressions – like thinking or talking or fighting for social justice. There is not a lash or pore out of place, no blemishes, no zits, no frown lines, and no indication that these dolls are meant to do anything other than to be someone’s eye candy. The dolls are also all still designed to be at their best in dresses and high heels – the way they presented almost exclusively in the publicity photos. The idea that women may prefer non-stiletto shoes in real life, or that some women cannot walk in heels at all, still has not occurred to the doll-makers. We are still presented as ideally legs and lashes. The message from this new line is less about presenting a realistic diversity of women’s bodies and lives and more about showing that women with slightly less conforming bodies can still achieve a Barbie-like allure of beauty perfection.

Imperfect women – who are probably the majority of women in the world – are still not seen by the Barbie-makers. This includes women with disabilities as well. There are still no Barbies in wheelchairs or with walkers, no Barbies with hearing aids or walking sticks, none with missing limbs or any kind of disfigurement. I suppose I should not be surprised. In a world where a pimple or a freckle or a frizzy look are threatening, I can only imagine how completely invisible disabled women would be.

Having said all this, I can hear some of the pushback already. They are just dolls, it’s just play, girls can do what they want with the dolls, girls can add freckles or cut hair or make the dolls become famous soccer players, etc. I can also hear the idea that under these criteria, it is impossible to include everyone.

So first of all, play is not just play. Mountains of research demonstrate the importance of play in helping children formulate identity, manage their environments, and absorb cultural codes and cues. When children do not see themselves represented in books and toys, they receive very clear messages about their place in the world. Similarly, children who are not exposed to the “other” in society learn to believe that that other does not exist or is not significant in their world. Peggy Orenstein, in her phenomenal book “Cinderella Ate my Daughter,” scans some of the most important studies about how children are affected by body images that they see in books, magazines and toy stores. The impacts of the too-perfect body pressure coming from the commercial world on girls’ self-concept are real, and can be devastating.

Second of all, it is not so hard to try and achieve real diversity. This is just a smokescreen. Toy companies could do it if it were an actual value to them. The obstacle is not that it is too “hard” but rather that toymakers just not that interested in selling to the “imperfect” market. Not only are “imperfect” women unseen by the doll makers, we are also unseen by salespeople and marketing directors. We are simply not viewed as potential or valued customers. Just like the clothing makers who refuse to create large sizesbecause they do not want to have large-size women as customers, so, too, I believe that toy-makers do not want see imperfect women as customers. That is the only real explanation for their unwillingness to deviate in any meaningful way from beauty standards. The dolls are all eye candy because companies want customers who are eye candy.

The good news is that somebody somewhere in Mattel is listening to these conversations. This is a good first step, and leaves me with some hope. But we have a long way to go before women deemed imperfect – whether due to body shape, disability, or an unwillingness to do the perky thing – are truly seen as complete and equal members of society.