The Real Women of the Wall Aren’t Going Anywhere 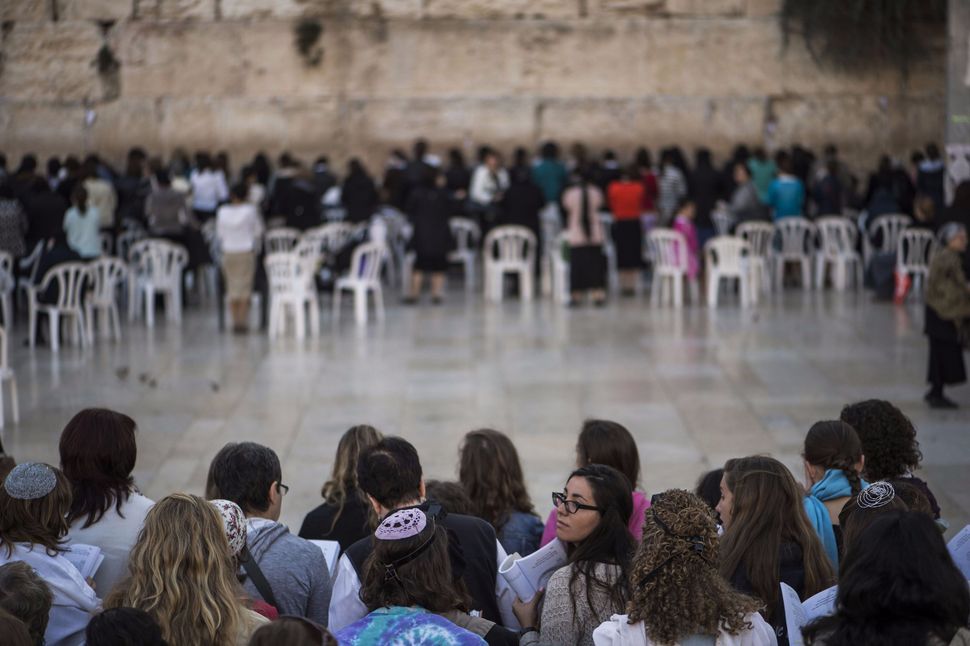 I am one of the Original Women of the Wall; you have been hearing about us for over two decades now. We are the ones who have not veered away from our single goal, fulfilling a pristine and realizable vision of the late Rivka Haut: to pray together according to our customs as Jewish women of many denominations at the Kotel in the women’s section. We are neither a splinter group nor a breakaway. We continue to do what we have done all along. We will pray with tallit and tefillin. Even if we risk being arrested in the near future. And that does seem likely, given that the administrator of the Western Wall foundation that once an egalitarian prayer-space is set up, he will forbid the women’s prayer practices that he despises. If we have to go back to the drawing board, back to the Supreme Court to regain our hard-won rights if they are taken from us, we will do so. And then our daughters will. And our granddaughters.

The group that has broken away from Haut’s vision is led by Anat Hoffman. I wonder if her group will continue to call themselves “Women of the Wall,” for, as it was announced, they have chosen to leave the Wall. I understand that they are exhausted and frustrated; after years of heroic spiritual engagement at the Wall in the name of women’s rights, what with arrests and monthly trauma. At this juncture, they have decided to give up the struggle. They have stated that what they can get by leaving exceeds what they lived with while staying put. What will they get by leaving? The promise of some voice in how the prayer area they are going to will be run.

As a feminist, I understand that when you don’t have voice, your human dignity suffers. And when your dignity has been degraded for so long, you make foolhardy decisions as you scrape for some recognition. For the former Women of the Wall, entering into a “deal” with the Israeli government and being a pawn of the liberal movements was, to my mind a poor calculation they made, as it requires their giving up their rights to pray at the Kotel. It may turn out that they have also negotiated away the rights of all Jewish women to pray at the Kotel. My dear Women of Robinson’s Arch: is this what you would call feminist process, negotiating away the rights of others?

In articles written in the last few days, headlines proclaim a “historic compromise.” What is the compromise? A compromise speaks of two sides giving up and gaining, but the ultra-Orthodox Jews are giving up nothing at all. They get complete control of the Kotel. They will no longer have to tolerate the presence of Jews who do not pray as they do.

The liberal movements and Hoffman’s’s group are, however, compromising a great deal. Primarily, they are giving up their right to pray at the Kotel in their fashions in exchange for a nice entrance to a site adjacent to the archeological park called Robinson’s Arch. It is the very place where Women of the Wall have already been exiled to for many years. It was the only place where we could safely read from a Torah scroll without being stoned or harassed by the ultra-Orthodox hooligans (who went unpunished) or arrested by the Israeli police under orders of the administrator of the Western Wall Foundation. (By the way; it is also a place that is claimed by the Grand Mufti of Jerusalem, Sheikh Muhammad Hussein, as being part of the Islamic waqf property, but that’s another story, which will surely unfold.) And at this place, Epcot Center Kotel so to speak, liberal Jews must still play by some Orthodox rules. No instrumental music at Robinson’s Arch. Debbie Friedman, of blessed memory, would have had to check her guitar at security.

Jews have experience sustaining themselves when forced into a ghetto and when forcibly exiled. Those who are going to Robinson’s Arch are allowing themselves to be willingly exiled from a sacred site Jews have yearned for centuries. And they are using a trick from the religious-imagination playbook to put a pleasant spin on it: they are already calling the new space “the Kotel” just as Jews call their own table, after the destruction of the Temple, “mini-tabernacle” or mishkan me’at. In that place of exile, they will long for some future redemption that, to my mind, is far more significant than a spot for prayer: having freedom from Orthodox hegemony in the areas of marriage, divorce and conversion.

As an original Woman of the Wall who has opposed this deal that is no deal along with her sisters from the start, I reassert; we will be staying at the Kotel, maintaining our hard-won rights to pray there, according our custom. We will continue to be women of diverse denominations from around the world who have figured out how to respect each other’s liturgical differences. We wish all others happiness at Robinson’s Arch. But we are not leaving the site, holy to Jews, holy to Jewish women, all these years. Watch for us.

The Real Women of the Wall Aren’t Going Anywhere