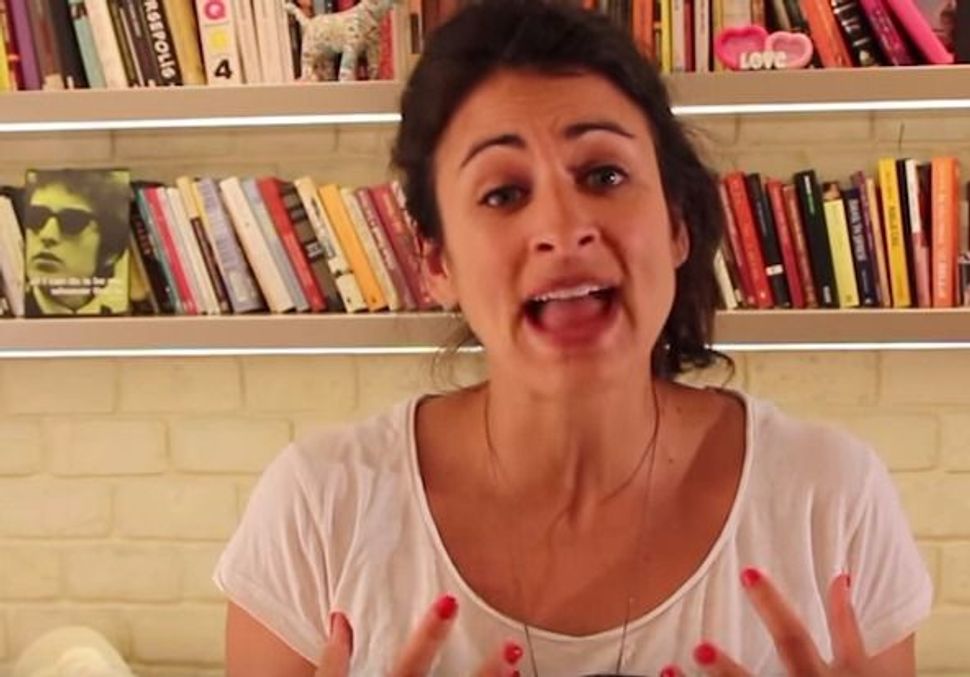 Good satire depends not only on distancing the viewer from the object of ridicule, but on making them identify with it, if only just a little. For North American Jews who’ve grown up with affection towards Israel, a new video blog (or vlog) does just that. is a sendup of sex-drenched Zionism which purports to tackle various hot-button aspects of Israel — “the most contentious state in the Middle East!” in the words of “Avi,” a “Canadian Jewess” who “went on a Birthright trip and fell in love with Israel.”

Through a website, a YouTube channel and a Facebook page, Avi covers such topics as how to beat terrorism, whether Palestinians are really oppressed or not, what to pack for Birthright, and the accusation, by Israel’s critics, of pinkwashing (the charge that Israel touts its record on gay rights as a way to divert international attention from the question of the occupation and related human-rights violations).

And while Avi is a cartoonish, lipsticked character who perpetually seems perplexed by the sincerity of her interviewees, many of us will no doubt identify with at least a sliver of her carefree naiveté.

“Did I just give a blow job to a guy named Dudu?” she muses in one segment.

In my kibbutz-loving period of the early 1990s, it wasn’t a guy with the unfortunate name Dudu I fawned over, but another whose name in translation meant “ploughed field.” Giggling over his agricultural moniker while in ulpan class, my pals and I idealized his Zionist credentials.

In another scene, Avi wears a pink t-shirt emblazoned with an Uzi, the kind which pepper tourist shops throughout Jerusalem.

While I never wore clothing depicting an actual gun, I did rummage through the kibbutz lost ’n found one day and selected a worn, burgundy t-shirt from a paratrooper, the kind Israeli soldiers design when they finish their basic training. (This one, from 1984, was extremely tame next to the tasteless ones appearing in more recent years — ones which promote rape and anti-Palestinian violence.) I later found the owner — a different strapping kibbutznik whose name meant cedar tree — but never did return it. Why would I? It had the perfect mix of soft fibers and Jewish power pedigree. All the better to wear while painting metal beams and bantering with the workers over never-ending tea-and-toast breaks in the kibbutz welding shop.

Avi Does the Holy Land’s latest web episode is the most cutting in terms of political messaging. “Pride vs. Pinkwashing” involves alternating scenes of Avi doing what she “does best” — “dancing on a truck” at Tel Aviv Pride, and interviewing Rami Younis, a Palestinian writer and activist over charges of Israeli pinkwashing. Calling Israel’s critics “belly-aching leftist shitheads,” Avi muses over Younis being “hashtag superserious,” and finally suggests to him that perhaps if he drapes himself in a rainbow flag, Israel will treat him better.

It’s probably fair to say that I move in circles that are highly critical of the occupation, and that, while I’ve taken a nuanced position on pinkwashing, still take the claim seriously. But I, too, have enjoyed a Tel Aviv Pride beach party, trying to order a vodka cocktail from a shirtless bartender and in my distraction confusing the Hebrew word for cranberries with that for paratroopers and enjoying my private little malapropism — a symbol of Diaspora idealization of Israel — for weeks after.

So is Avi Other? Or is Avi us? For those who are distressed by the occupation and feel a gradual distancing from Israel through decades of government intransigence and illiberal moves intended to silence and intimidate human-rights activists, probably a bit of both. And for those who don’t have a single critical word in their lexicon for the Jewish state, I’m really not sure. But I’d love to see their reaction.