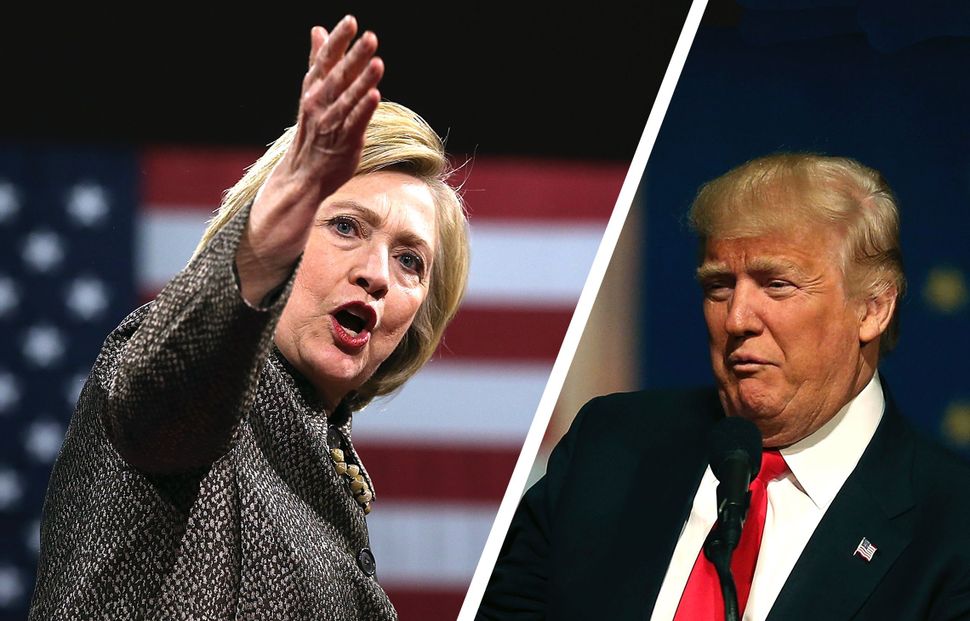 I woke up the morning after the Acela Primary and realized that the Clinton-Trump matchup is a dream come true.

I’m a Hillary Clinton supporter, but until it became basically a certainty that she’d be running against Trump in the general election, I was not a fan.

As a staunch feminist and a passionate liberal, I had my guilty flirtation with Bernie like so many did. I reveled in his plans for redistributing wealth and almost voted for him, changing my mind only as I stood in the voting booth and reflected on the value of Clinton’s experience, and the reality that any change we can make in our United States today will be halting, messy and disappointing; that is, the kind Clinton is good at achieving and the kind Sanders scorns.

For me, the fact that Clinton is a woman was pleasant, but an afterthought. Until now.

Now, I am zealously “with her,” as those ubiquitous Internet ads say.

Those few words say so much about Trump. Women disgust him. Last year, he screamed that very word, disgust, at a lawyer who was deposing him when she requested that the proceedings break as scheduled so she could pump breast milk.

He doesn’t see us as full human beings; we are reduced to what we look like. If he considers a woman sufficiently attractive, he tries to use her to add to his alpha-male status by either sleeping with her and making it known or bragging that he could sleep with her, if he wanted to. (Bonus for the Donald: None of this has to be true. Women who challenge him are dismissed on the basis of their looks.

Of course, Trump and his defenders will say that he has promoted women who work for him. But the record shows that those women invariably start to threaten him, and are likewise dismissed.

Put most concisely, and thank you Franklin Foer for doing so, in Slate, “Trump represents the possibility of a return to patriarchy.” And that appeals to lots of people, and our society is still in many ways a patriarchy, and his popularity is proof of that.

But. We also have come a long way, baby, and Hillary Clinton is proof of that. She is truly qualified to be President. She has the resume. She has the grit. And she has the intelligence. There are lots of people who don’t love her or even like her for lots of reasons. She’s a robot; she’s cold; she’s shrill, they say. (I don’t, but that’s another column.) But nobody says she isn’t mind-blowingly smart. Smarter than you and I; smarter than Trump; the smartest in the room.

Trump must have some smarts of his own, He made several big mistakes in real estate and got bailed out, but in the end, he made something with the head start his father gave him. It’s basically a self-marketing business — beauty pageants, television shows and fashion lines — that builds on and feeds his bombastic brand.

The qualities that built such a business served him well in the Republican debates, where he wasn’t facing a single opponent with the depth of experience and intelligence that Clinton has.

She is not going to sink to his level like they did. She’s going to reveal her grasp of complicated facts.

She’s not invulnerable, and Trump not take the high road as Sanders did, when it comes to the e-mail server issue. But debates play to Clinton’s strengths, and they are many, and she should get the opportunity to and show him for the empty bag of bullying bluster that he really is. In the process, she’s going to make a whole lot of women feel a whole lot better.