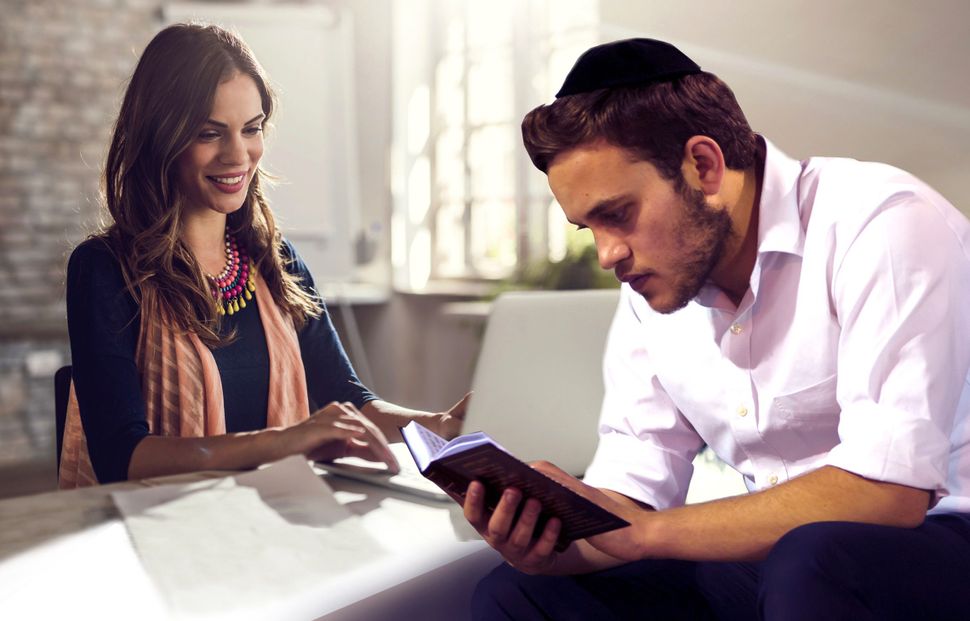 I have a confession to make: I’m in a mixed marriage. But not the kind you usually think of when you hear the term, which conjures up images of countless Tevyes sitting shiva.

Modern mixed marriages comprise couples where one person discretely starts the air conditioner on Shabbat while the other pretends to look the other way, to full-blown atheists married to ultra-Orthodox believers.

Sometimes a couple knows what they’re getting into.

Shmuel and Devorah were not on the same page religiously when they got married – and they’re still not. Devorah drives on Friday night after dinner to see her mother while Shmuel stays at home. He fasts on Yom Kippur; she has a bagel after he’s left for morning prayers.

In other cases, that’s not the way the relationship started out. When my wife Jody and I first met, we were both newly religious. We were attracted to each other’s passion for Torah and a vision of how we’d raise our children.

A dozen years in, though, I began to change. Observance and belief dropped off as I grappled with finding – or rather reconnecting to – a more authentic version of my secular self.

For many years, I kept our status as a mixed marriage a secret. I didn’t want to confuse the kids who were attending religious schools. And Jody was afraid that our observant friends would stop eating in our home.

Eventually, I began to slowly “come out.”

I soon discovered we’re not alone. Other people in mixed marriages reached out to me, eager to share their own stories.

Penina has been married for nearly 30 years. It started simply, she told me, with writing down notes during Shabbat “I justified it by telling myself that it was a stress reduction technique, a way of silencing the frantic demands bouncing around in my brain to ‘remember this’ or ‘remember that’ for the next 24 hours.”

Later it was the “iPhone in the bathroom” trick. “It’s easier on my middle aged eyes with the large fonts and the brightly lit screen than reading a book,” she explained. But she would never pull out her phone on Shabbat in public – or in front of her husband at home. “He still doesn’t know. We live in a small religious community and it would have a big impact. I don’t know if our marriage would survive.”

So how do people in mixed marriages make it work?

For Miriam, whose husband (but not her community) knows she no longer keeps the Sabbath, it’s all about family rules. “We have an agreement that when one of the boys walks out of the house, I’ll make sure he’s wearing a kippa, even though personally it doesn’t matter to me,” she said. “It’s no different than getting them to clean up their room.”

I asked Miriam if she ever feels trapped – that she can’t drive to the beach or watch a movie on Shabbat if she wants to. “With three little kids, by the end of the week, I’m so exhausted, I just want to chill and spend time with my family at home,” she said.

There is one thing Miriam wants. “A tattoo. But that’s such a secular thing to do. My husband begged me not to, so I said, OK. I really don’t need one.”

For me, the key has been being able to differentiate between “core values” and “external actions.” Because the latter – like everything in life – are always going to change, sometimes radically.

If you get too attached to the outside identity – which includes religious behaviors – that can precipitate a crisis. But if you know going into the marriage that many, maybe even most of the “actions” are going to change, you can focus on the personal qualities that brought you together in the first place.

Jewish writer and philosopher Alain de Botton (“How Proust Can Change Your Life,” and “Religion for Atheists”) was interviewed about the nature of marriage on the public radio program This American Life.

“Many of the hopes you take into a marriage have to die in order for the marriage to continue,” he told host Ira Glass.

De Botton’s point is that, given how complex a marriage is – where you’re looking for a best friend, a co-parent and a compatible sexual partner all in the same person – “we’re not going to be able to get it all right. There will be many areas of misunderstanding and failure [and] you will often be in despair.”

That doesn’t mean your marriage has gone wrong. “It’s a sign that it’s normal and on track,” De Botton said. “A certain amount of sober melancholy [can be] a real asset.”

Jerusalem-based couples counselor Nomi Raz put that in more practical terms. “Dropping expectations and learning how to compromise is essential for a healthy relationship.” And for a mixed marriage, she added, “the one who’s more religious becomes a bit less. The one who’s less observant needs to be more tolerant.”

Jody and I have been able to find a balance between self-actualization and accommodation. We both bend but not to the breaking point. By being honest and respectful, we’ve made it work.

And most important: people still eat in our home.

Note: All of the names in this article are pseudonyms – the people I spoke with in mixed marriages all insisted that they not be identifiable so as not to harm their status in their communities.

Brian Blum is a freelance writer who specializes in technology, start-ups and the entrepreneurs behind them. Originally from the San Francisco Bay Area, he lives in Jerusalem with his wife and three children. More at www.bluminteractivemedia.com