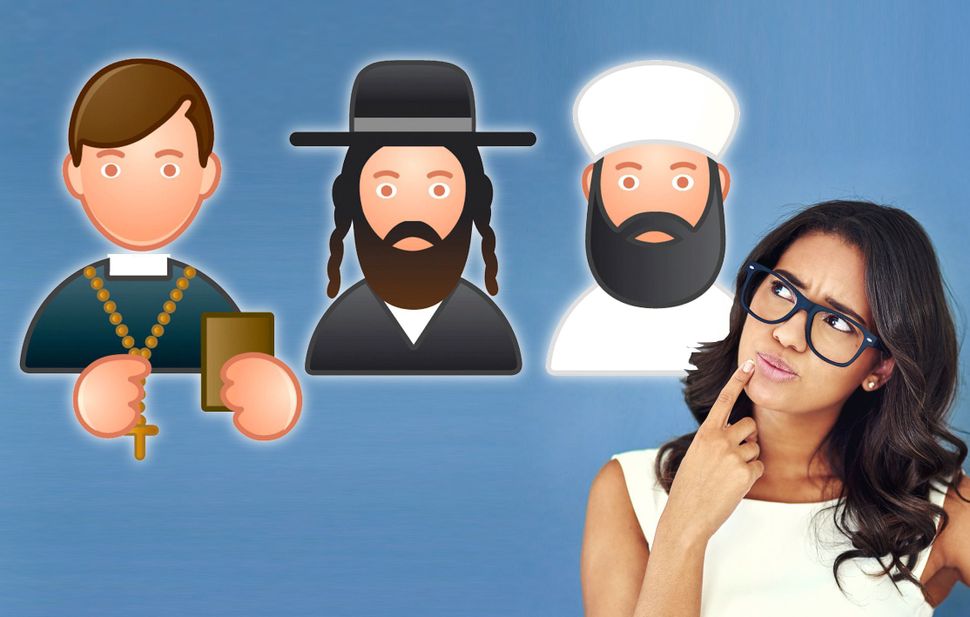 I was at the gym this morning, when an ad came on the TV with a powerful image. It was three men: a minister, an imam, and a rabbi talking to and hugging each other.

I couldn’t hear what they were saying but it looked heartwarming — the kind of feel-good image you might find on a CNN special on world-religions or the cover of Time Magazine. So why did it bother me so much?

Before rabbinical school, I spent two years at Harvard Divinity School studying Christianity and Islam. My friends there, many of them, were women studying to be Christian, Buddhist and Muslim religious leaders.

We were proud of our multi-faith efforts. We attended dialogue events, organized an interfaith viewing and discussion of “The Passion of the Christ,” and worked hard to create civil conversations about Israel, the West Bank and Gaza.

We also talked — candidly — about what it meant to be women in our traditions, many of which, despite their misogyny and patriarchy, we’d chosen not to walk away from.

A few years later, I interned at a prestigious New York university where my supervisor, a young Orthodox rabbi, befriended the school’s Muslim imam.

They were both practicing men who didn’t eat pork, believe in sex before marriage, or use birth control.

Their faces and their friendship were splashed everywhere – their relationship valorized, and despite the fact that I (unlike my supervisor) had spent two years studying the Q’uran, I was never invited to these discussions.

I was a young, single, progressive but most importantly female rabbinical student. There simply wasn’t room for me.

I would have challenged the place of women in their interpretation of Judaism and Islam with my mere presence.

Since ordination, I’ve become very close to a number of young, female Christian ministers in the communities I’ve served.

And in most cities I’ve lived in since ordination, every single time I’ve seen an interfaith event sponsored by the Jewish community, it has featured an imam, a rabbi, and a priest — all with beards.

Never have I seen a young clergywoman on these panels. My female colleagues are no longer surprised, but we are heartbroken.

Multifaith isn’t really multifaith if it excludes 50% of the population.

My interfaith friendships with other young female clergy have been transformative and powerful, inspiring and critical to my own spiritual and intellectual growth.

They have challenged me to fully live the values of my own tradition, allowed me to study texts with people who read them very differently than I do, and forced me to start conversations – always – with the benefit of the doubt.

And yet these friendships are invisible to the broader community simply because we’re young women.

No one but us celebrates them. It’s time for that to change.

Rabbi Jordie Gerson works as a full-time Rabbi for Adventure Rabbi in Boulder, Colorado. She is an accomplished writer and speaker with a blog at the Huffington Post religion. Follow her on Facebook