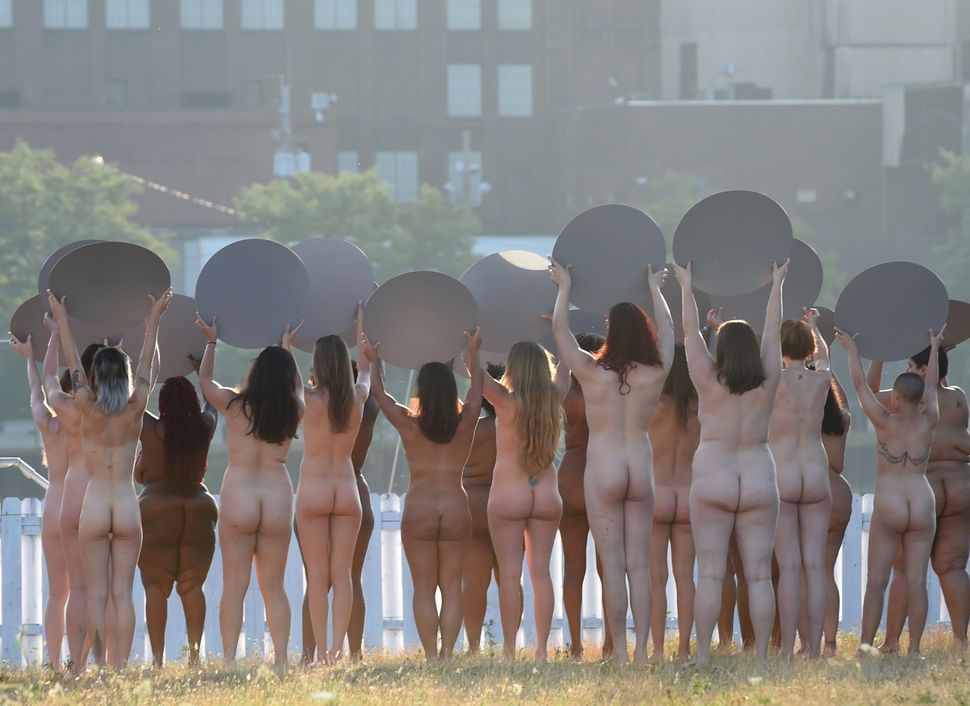 One hundred women posed nude in advance of the Republican National Convention on Sunday. Image by TIMOTHY A. CLARY/AFP/ Getty Images

As the sun rose over downtown Cleveland Sunday morning, Marsha Besuner Klausner wore a bandana festooned with American flag pins — and nothing else.

As the 65-year-old Jewish grandmother stood nude with a group of 99 other women on the day before the Republican National Convention, Klausner couldn’t stop thinking about how great it was to see such a diverse group of women proudly baring it all.

“We do it for the doctors all the time,” she said. “This time we did it for ourselves.”

Klausner did not tell any of her family or friends that she would be featured in Spencer Tunick’s Everything She Means Everything art installation, in which the women posed nude while holding mirrors in between a warehouse and a fire station in downtown Cleveland on Sunday. Over 1,800 women from all over the country applied to participate.

100 women did this at 6am on a Sunday no less #mondaymotivation #EverythingSheSaysMeansEverything pic.twitter.com/rEsOR2Tecz

Tunick once did a similar shoot at the Dead Sea in Israel.

Although many of the women who got naked did so out of a desire to protest Republican rhetoric about abortion or women’s rights, Klausner did not join the group to protest Donald Trump or the GOP.

Klausner, who often played Helen Reddy’s “I Am Woman” to her daughter when she was little, said she simply wanted to be part of the women who gathered to shed their clothes together without fear or judgement.

Klausner was bullied in school and doesn’t normally enjoy being photographed. She didn’t even know that the photo shoot would involve mirrors until she showed up on Sunday.

“I’m actually very modest,” she said. “I never go into a synagogue or a church without my head covered and my arms covered and a long appropriate dress.”

So shedding it all for a camera definitely pushed Klausner outside her comfort zone.

After participating in the project, she received phone calls of support – some from friends, others from someone who used to babysit her kids when they were little – expressing support and even, in one case, a desire to do the same one day.

But despite the strong sense of sisterhood and solidarity at the event, Klausner says she won’t be heading out in her birthday suit any time soon.

“This is not something that I would normally do ” she said. “Nor would I ever do it again.”