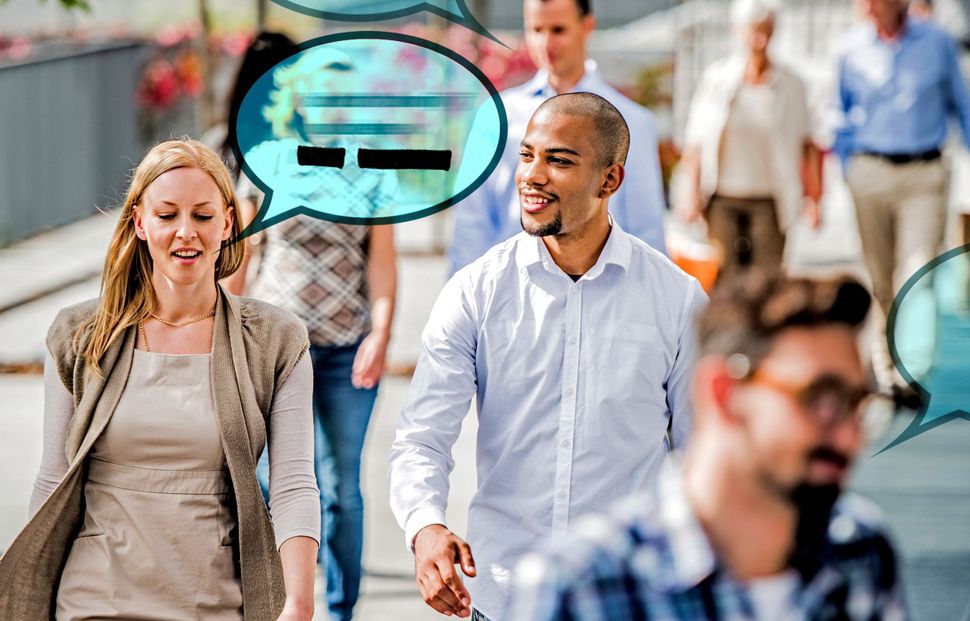 By most accounts, I am not a self-hating Jew.

I wrote a doctoral dissertation on a Jewish-studies topic, have a blog with the word “Zionism” in the subtitle, and have published enough articles on Jewish-related topics that there’s a (charming) post dedicated to me on one of those big white-supremacist websites. There’s a poster of Theodore Herzl in my apartment, an apartment in which Philip Roth gets basically his own bookshelf. Yes, I’m secular, but I wasn’t raised observant, so this wasn’t a departure from existing practice.

Yet I don’t always mention I’m Jewish, at times when doing so would be appropriate. Other times, I find myself playing it down in some way, without quite realizing I am, only to feel ashamed.

I recently, in the lead-up to a trip to Israel, found myself just not mentioning this destination to people. By “people” I mean newer friends, acquaintances, the usual. And I wasn’t quite sure why. Partly it was to preempt a possible Israel Conversation. (Likely in some cases, unlikely in others.) But was that it, really?

Why, for instance, am I sometimes wary of spelling out to my Instagram followers, most of whom are fellow poodle-owners, mainly in Japan, that the potatoes I just grated and fried are for a Jewish holiday?

It’s not closetedness, exactly, but an impulse. An impulse not to share a fact that could be difficult. A desire, that is, to get off on the right foot in a new situation, in a world where anti-Semitism exists, and where it’s never entirely clear which quarters it’ll come from.

It’s on the left (the UK’s Labour party, whose leadership recently dismissed a series of politicians for making anti-Semitic statements) and the right (Donald Trump’s vocal neo-Nazi supporters), and as those examples suggest, on both sides of the Atlantic. I’ve had less-than-Jew-friendly interactions with people of various genders and ethnic backgrounds. You just never know. I suppose what I’m saying is, there is a rational basis for this reticence.

In principle, at least, Jews have the option of “passing” – not necessarily as white (although in my pasty case, yes), but as members of whichever non-Jewish population they most resemble.

The “closet” metaphor doesn’t sit entirely right, because it’s not the same struggle as coming out as LGBT, in that—among other things—a Jew will likely have Jewish parents. Few adolescents have ever been thrown out of their homes for being Jewish.

And yet, the days when secular Jews tended to come from Jewish communities may be over. Or, at least, I couldn’t really say that I come from one. I grew up in New York, but my world was always minority-Jewish at most. I now live in a part of Toronto where (judging by the non-availability of matzo and tahini, as well as my admittedly weak Jewdar) I’m the only Jew for miles. Probably not the case, but it feels that way. It takes effort not to just blend in with the crowd.

The stakes of this might seem small—a question of personal neurosis, or a vestigial remnant of that thing I’ve heard Jews from older generations do, where they only ever whisper the word “Jewish.” And that’s what I’d have thought, too, until I got to the following passage from Jodi Kantor and Catrin Einhorn’s excellent New York Times article on Canadians who’ve sponsored Syrian refugees:

“‘The sponsors do not share everything about themselves, either. Emma Waverman […] was telling her co-sponsors about the stirring bar mitzvah speech her son had written about the Syrians they were aiding when another woman stopped her.

‘Do they know we’re Jewish?’ she asked.”

It’s ambiguous, but the context suggests that at least one of the Canadian Jews sponsoring Syrian refugees had made a point of not revealing her Jewishness. As versus, say, that it just didn’t come up.

It’s in no way my interest here to fault the Jew or Jews in question, to pooh-pooh their efforts from a tiresome everything-is-problematic perspective. They and the other Canadian sponsors are going above and beyond, helping those in desperate need, and offer a much-needed example in this increasingly xenophobic age. Rather, it’s that this is such a frustrating missed opportunity.

Consider that the point of the sponsorship program, explained earlier in the story: “The hope is that the Syrians will form bonds with those unlike them, from openly gay sponsors to business owners who will help them find jobs to lifelong residents who will take them skating and canoeing.” That was the line in my head when I reached that other part.

I cringed when I got to the Jewishness-not-revealed part of the article, but it was a cringe of recognition.

If it’s my impulse to question the closetedness of a Jew who is saving Syrian refugees, then maybe I should, in the relatively frivolous situations I’ve described, get over it. Not embrace piety I’m not drawn to, but identify myself as Jewish at full volume, especially at the moments when doing so seems not worth the trouble. Those tend to be the times when it’s needed the most.

Phoebe Maltz Bovy is an American writer living in Toronto. Her book, will be out with St. Martin’s Press in Spring 2017.