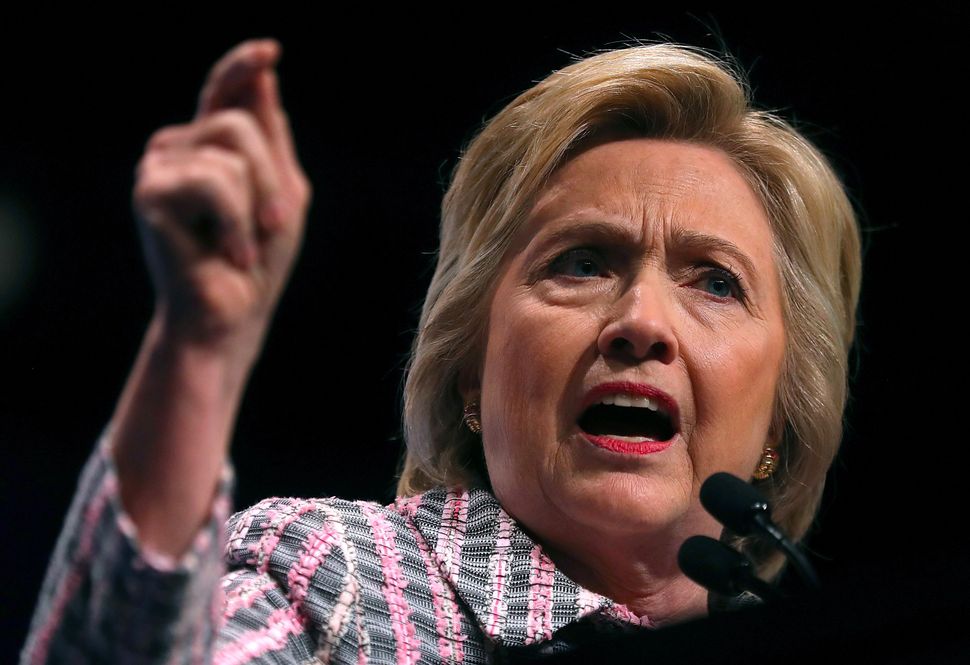 Hillary Clinton speaks at the 117th National Convention of Veterans of Foreign Wars on July 25, 2016 in Charlotte, North Carolina. Image by Getty Images

In 1996, historian Henry Louis Gates wrote an article for The New Yorker called “Hating Hillary,” in which he parsed the antipathy towards then First Lady Hillary Clinton. Gates didn’t produce one single cause but rather offered various explanations, ranging from the Clintons’ outsider cluelessness when they arrived in Washington to the failure of the 1993 health care bill to Hillary Clinton’s aversion to the media.

The piece is less of a portrait of why Clinton was hated and more of a landscape of the hostility. Her gender is not decisive, but neither was this a story that would have likely happened to a man.

Twenty years later it’s a fascinating read — both because this week Clinton will become the Democratic nominee for president and because the hatred towards her has never ceased. In fact it has intensified.

In the rubble of the RNC Cleveland Witch Trials, it’s clear that certain people in Washington would burn her alive if they thought they could get away with it.

“Serious accusations have, of course, been leveled against the President’s wife,” Gates wrote in 1996, “but it’s usually what people think of her that determines the credence and the weight they give to the accusations, rather than the reverse.”

Or what they want people to think of her. Take the Republican nominee. In his first joint interview with running mate Mike Pence on 60 Minutes, Donald Trump was asked about his VP pick’s 2003 vote for the war in Iraq. Trump, who now claims he knew the war was a bad idea and was opposed to it, said, “I don’t care… It’s a long time ago. And he voted that way and they were also misled…”

Interviewer Lesley Stahl pointed out to Trump how he’s repeatedly used Clinton’s vote — which authorized the President to go to war but preferred a diplomatic resolution — as a way to delegitimize her.

“Mike Pence is entitled to make a mistake every once in a while,” Trump said, leaning in to playfully jostle Pence. “But she’s not?” Stahl asked him, referring to Clinton. “No. She’s not,” Trump replied.

The word entitled is perfect here.

Pence can make a mistake. Trump can make a stunning array of them in the span of 24 hours. But if Clinton makes a mistake, she is critiqued, verbally abused and sent to the fictional prison that Trump and Christie and crew have erected for her in their troubling imaginations.

The disastrous Iraq vote notwithstanding — all Republicans senators but one voted in favor, and 29 Democratic senators voted for while 21 voted against — what’s noteworthy is that Hillary is not entitled to make mistakes. If this negation of the flawed human condition resonates with you, you’re probably a woman. Anne-Marie Slaughter, Debora Spar and others have written eloquently about the damaging expectation made of women to be perfect. The most successful woman in American politics is definitely not exempt.

The ground Gates covered in his ’96 article resonates today in other ways. When she began her stint as First Lady, Clinton was a working mother. She said that she regretted not having time to “get out” more because, when she wasn’t working, she earmarked whatever time was left for family.

“I think that’s one of the reasons people say, ‘Well, who is she? We don’t know her,’” she told Gates. Then she nailed the whole work-life balance conundrum with a few simple words. “You know, you pay a price no matter what decision you make.”

One of the most poignant stories told in The New Yorker article came via media consultant Mandy Grunwald who came up with an idea to have Chelsea Clinton — then 12 years old — introduce her father as “The next president of the United States” at the 1992 DNC convention. The plan was to have the room go dramatically dark just after screening the short film “The Man From Hope”, and then turn a spotlight on Chelsea Clinton.

Hillary Clinton nixed the idea immediately, telling Grunwald, “I would never put my daughter in that position.”

The story is told in part to illustrate Clinton’s weakness in using image, media and public relations to political advantage. In Washington, where image is often more important than substance, she’s always been at a disadvantage.

And even though Clinton has improved her image-building skills over the years, there’s no mistaking the choice before America: Trump vs Clinton. Image vs Substance. Those who are entitled to make mistakes because they can spin it vs those who are punished for them.

Twenty-four years after Clinton prioritized her daughter’s well-being over a politically orchestrated moment, that daughter is now a woman making her own decisions. On Thursday night, Chelsea Clinton will take the stage to introduce her mother as “the next president of the United States.”