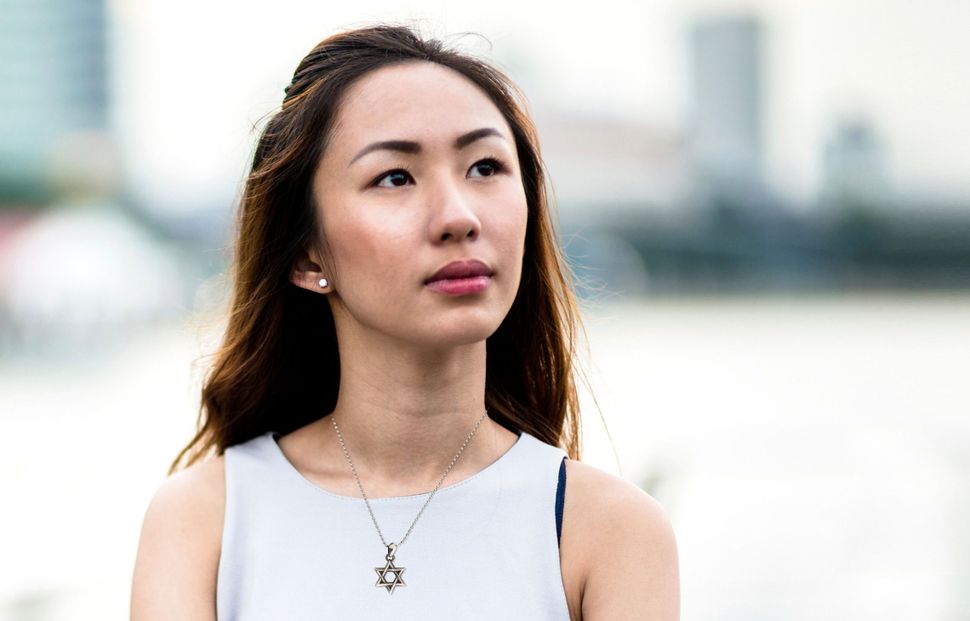 I grew up in South Korea until the age of 15, which was when I moved to Ohio to go to a boarding school. South Korea has less than 100 Jews out of a 50 million population, which is composed of 99.9% Koreans. I did read comic books based on the Talmud when I was little with rabbis as cartoon characters, but that was the extent of my interaction with Judaism.

So when I started attending weekly conversion meetings with a rabbi, I started realizing just how complex and multifaceted of an identity, culture, and religion Judaism was.

Hence the questions began: Am I committing to the religion? Identity? Culture? Family? Tribe? All of it? But I am already Korean, and American, and I wasn’t looking for a new identity.

Like many other converts out there, I started considering conversion to Judaism for love.

Aaron and I met for the first time at a friend’s wedding in the United States, a few years after college. Despite having gone to the same college, we had never met, and we still joke about how we were probably in some of the same classes in college.

Like many other couples these days, we each pursued our career in different parts of the country, and the world — Aaron in Asia, and me in Africa. And after countless flights, emails, Skype calls and dates, we are now in New York City together, engaged, and preparing for our wedding in early 2017.

I don’t quite remember when the topic of conversion first came up, but I do remember being surprised. I barely knew he was Jewish! It did not appear to be a huge part of his life and he was neither religious, nor observant. There was no mention of synagogue, no yamulke, no keeping kosher. Maybe an occasional Yiddish phrase or word, like oy vey or schmuck — but who doesn’t say that?

What made it even more confusing was his request: he would appreciate it if I converted, but that it is not necessary for me to change anything. And after some time later when I told him that I would convert, I thought it would be exactly that — just a rubber stamp, with no implications on my identity, culture, or beliefs.

I still felt that I needed to understand why my conversion was important to him. It was so that we can have a united front when it comes to raising kids, he said. Then it wasn’t even about kids any more, but more about connecting with his side of the family. It was definitely not about the higher power, but it was all about the customs and food. That’s all he said at first.

Over the past six months, I probed him on what Jewish identity meant to him and what it meant to him for me to convert. Ironically, months of pushing and pulling, taking a Torah class together, and teaching me how to read Hebrew led him to confront and acknowledge his own Jewish identity in a way that he never had before.

Suddenly the holidays celebrated for thousands of years represented something bigger than himself, and took on a meaning beyond fun times with food and wines. He said Judaism has provided him with the foundation which enabled him to go and explore the world, during which process he found me, an incredible Korean lady (in his own words).

But he also feels strongly about his Jewish identity and his desire to have a Jewish family. To him, Judaism represents the common thread that will keep the family together, and the foundation that will enable him to provide good education and moral compass for his children.

Yes, he wants to have both Korean and Jewish culture in our family, but he wanted to invite me to be his full partner in passing on the Jewish tradition, and in developing our own tradition together.

I understood those things were important, but I still struggled with why it meant “I” have to change. I am aware of the matrilineal nature of Jewish identity under certain denominations of Judaism, but even an Orthodox rabbi who supervised Ivanka Trump’s conversion can’t make me Jewish according to an Israeli rabbinical court, so I felt that regardless of my conversion, we will fall into that wide pool of Jew-“ish” people, when it comes to “really how Jewish is your family?” question.

I had to take a step back, and remember that no one can “make” me do anything. Even though Aaron is the reason why I started considering Judaism, I then have to “choose” it for myself. Much of Jewish identity manifests itself as a combination of self-identification and identification by others.

Given that I am unmistakably Asian, no one will “confuse” me for a Jew even if I am physically located in a synagogue or reading the Torah, so it became even more important for me to figure out what it means for me to adopt Judaism. And here is my starting point.

I identify with Jewish teachings that focus on the present and empower “self” rather than focusing on our lack of control relative to God’s omnipotence. For example, tikkun olam is an important part of Judaism, and it encourages us to do something today to leave the world a better place than when we got here. I love that I am encouraged to live in the present and actively engage.

I also see in Jewish communities a pursuit of excellence without obsession over perfection, and emphasis on persistence yet acceptance of contradictions. I feel that these are lessons that I learned the hard way, as a Korean woman who grew up in a society with many black and white rules, moving to the United States, then working in Africa. These approaches to life resonate with me, and encourage me to engage with every situation with a “cool head and warm heart.”

And while I will be adopting a lot of Ashkenazic traditions based on my fiance’s roots, I will also continue to incorporate my Korean roots into my life.