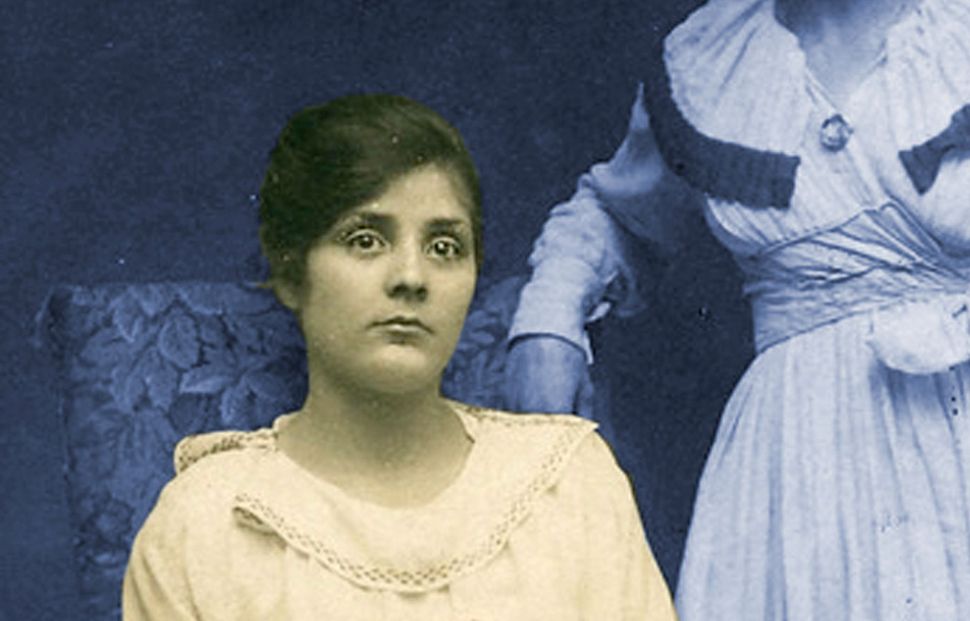 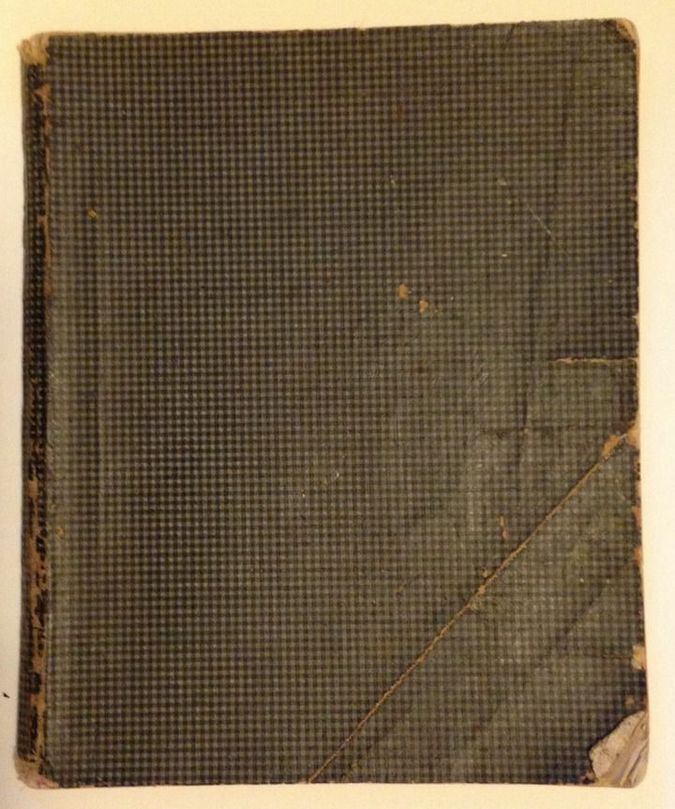 Estrella’s notebook records not only a particular time in a young Jewish woman’s life, but also a distinct period in European Jewish history. As I have written elsewhere, the Alliance Israélite Universelle was a Jewish philanthropic organization established in 1860 that saw France as producing models of “the citizen-Jew.” (It continues to operate today.)

The spread of the Alliance’s influence in the late 19th and early 20th century is truly astonishing. According to Aron Rodrigue and Esther Benbassa, between 1862, when the first Alliance school opened in Morocco, and the start of World War I, 183 schools were established with over 43,000 students in places ranging from Istanbul, Salonica, and Teheran to Aleppo and Tripoli. The very best students were recruited to travel to France and train for free in the Alliance academies, with the attendant expectation that they would teach in Alliance schools for a certain number of years after graduation. 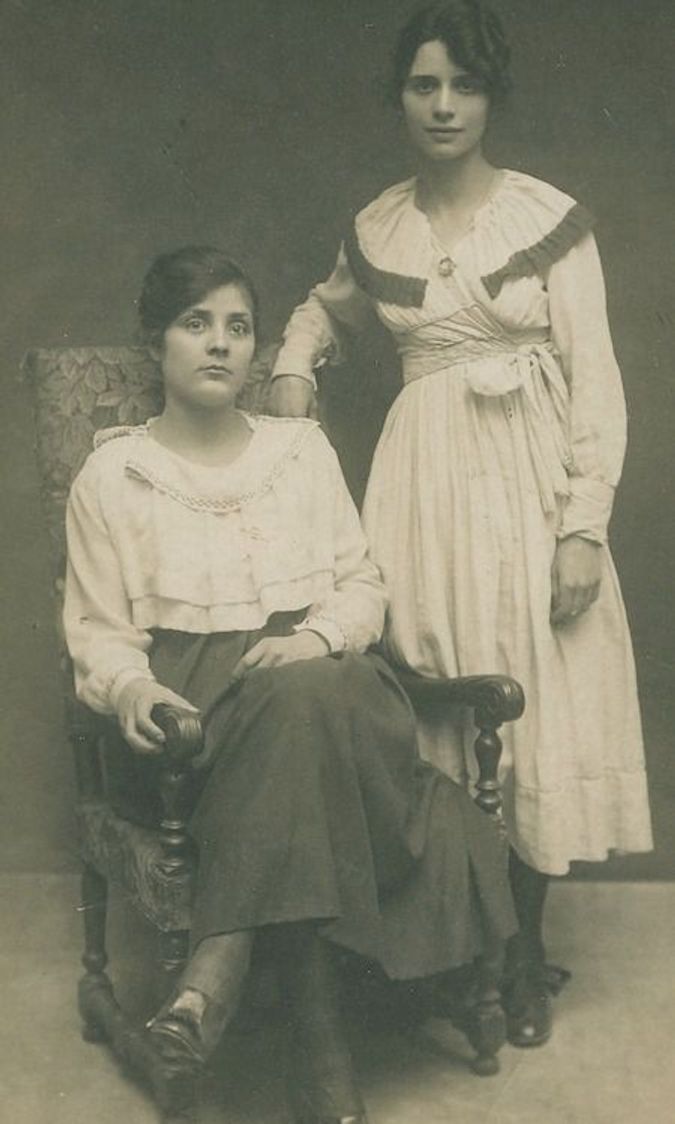 Estrella Galante (seated) in Paris with a friend. Image by Courtesy of Jeanine Graham

For my great-grandmother, who was born at the tail end of the Ottoman Empire’s rule over Rhodes and lived there as the island transitioned to Italian rule, the opportunity to study in Europe must have been thrilling and scary. What was it like to sail from Rhodes to Paris in 1914 or 1915, leaving behind several siblings, her mother Rivke, and her father Samuel, a wealthy winemaker? Who is the beautiful friend standing in my family’s sole photo of Estrella from this time period? While living in one of the Alliance’s female boarding houses in the suburban neighborhood of Neuilly-sur-Seine, did Estrella ever sneak into the sparkling metropole for an adventure? Was she relatively cloistered or did she have chances to meet other Ottoman Jewish families in Paris?

Unfortunately the notebook, while chock full of vocabulary lists, literary excerpts, and popular songs, is not a diary; it does not detail the emotional journey of living and studying abroad. The transcribed texts are therefore the only clues I have to go on. So I return to the words that Estrella wrote down exactly a century ago, on September 8, 1916, which occupy the very last page of the notebook. The words, transcribed in Estrella’s lovely looping handwriting, form an excerpt of a popular French song from the time, Sur Les Flots du Bosphore, or “On the Flow of the Bosphorus.” (She shortened the title to just Flots du Bosphore in her transcription.) The first stanza goes as follows:

See the night as it throws on Byzance Its light veil And my tartan [sailboat] rocks Ready to sail away Come down oh my proud sultana Flower of my passions Of the warm and diaphanous night Let us leave forever. (Transliterated and translated by Christina L. Sztajnkrycer) 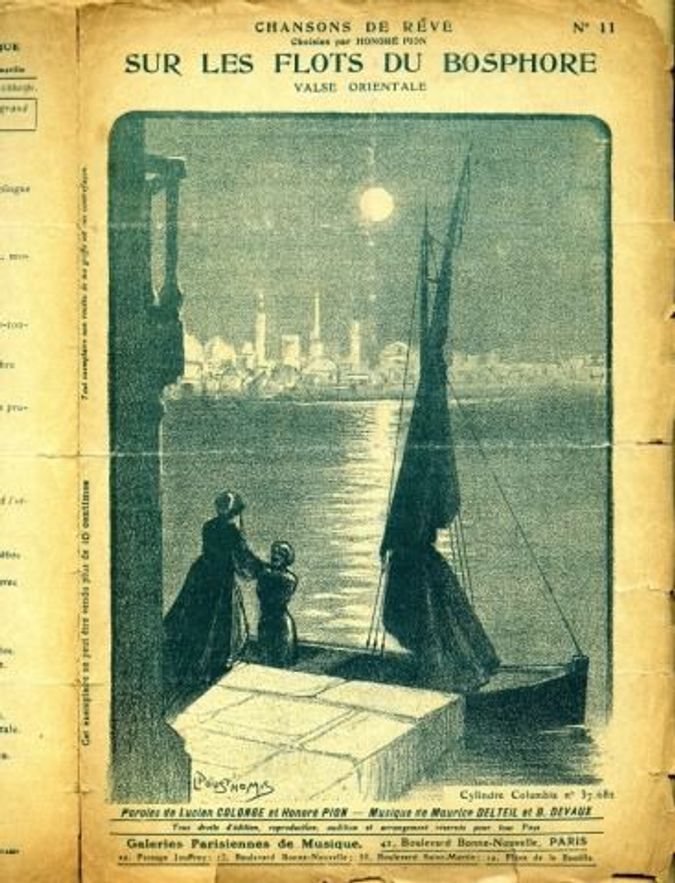 The romantic lyrics of Sur Les Flots du Bosphore are a far cry from the didactic texts found elsewhere in the notebook. Instead, they conjure an exotic, orientalist scene: moonlight shining on the Bosphorus Strait, the skyline of Istanbul (referred to by its former name, Byzantium) in the distance, a sailboat and a passionate lover promising escape to a new life. I wonder whether Estrella saw herself as the romantic runaway rather than the dutiful French student and “citizen-Jew.” Does the song bear hidden clues to her inner life?

Through the magic of the internet, I locate some original cover art for the sheet music, which designates it as a “Valse Orientale” – an Oriental waltz. Might Estrella have seen the music for sale, festooned with this very artwork, while out strolling in Neuilly or in Paris? Did her teachers encourage her to sample contemporary French popular culture as part of her education?

In light of her life’s trajectory, I believe it is not a coincidence that a song about a boat is the final text in Estrella’s notebook: My great-grandmother’s life was marked by migrations both geographical and cultural. Having earned her teaching certificate, she returned to Rhodes after World War I and taught French briefly in the island’s Alliance Israélite Universelle school. Within a year, however, she had embarked on yet another life-changing journey. She sailed to Capetown, South Africa to meet her future husband, a Turkish entrepreneur named Haim Galante. Once settled in British colonial Africa, Estrella never again taught French.

The song’s reference to the waves of the Bosphorus also has symbolic resonance for Estrella’s story. The Bosphorus (or Bosporus) Strait runs through the city of Istanbul, connecting the Black Sea to the Sea of Marmara. The waterway serves to separate the European and Asian sides of Turkey. My great-grandmother’s life, likewise, straddles dual influences. As a Jew growing up on Rhodes, her first language was Ladino, the Judeo-Spanish dialect that links Sephardic Jews to their Spanish lineage. As a pupil and later teacher for the Alliance, however, she was a designated ambassador of French culture — a savante (a learned person), as girls who had completed their schooling were affectionately called in Jewish communities around the Mediterranean. Estrella’s life and her languages reflect a unique mixture of East and West.

Assembling Estrella’s story has been a focus of my genealogical research for over a decade now. I can’t shake the feeling that her notebook, while on its surface a perfunctory chronicle of a teenager’s classroom exercises, generates a significant memoir between the lines. Granny Galante, as she was known, died the year before I was born, so I never had the chance to hear her talk about her choices and her changing landscapes. For me, Estrella’s French verses comprise a mystery worth unraveling, one that may ultimately reveal the savante in my own family.