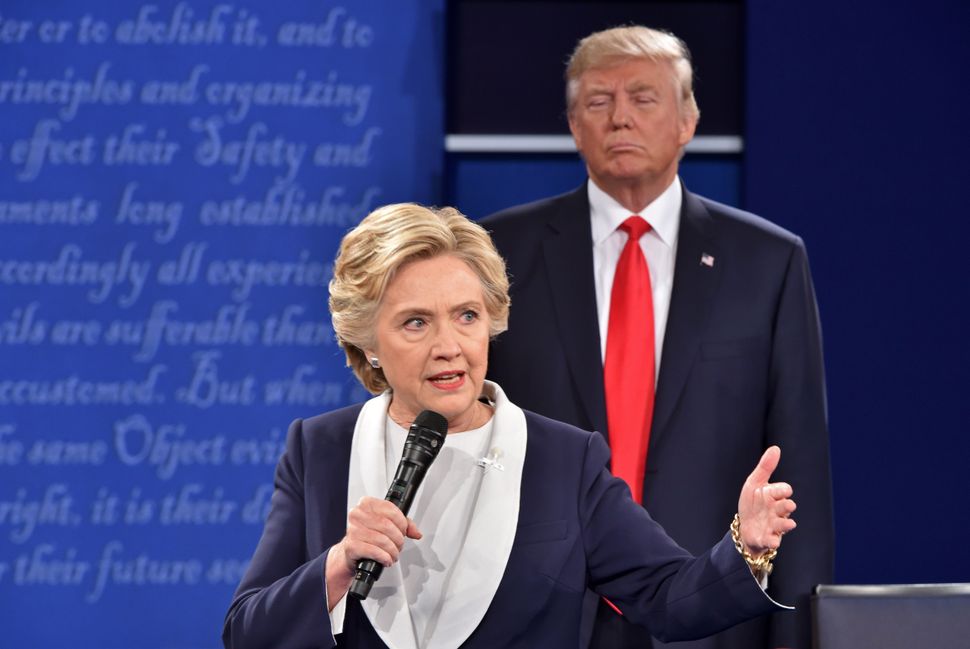 Donald Trump, noticing Arianne Zucker: Yeah, that’s her. With the gold. I better use some Tic Tacs just in case I start kissing her. You know, I’m automatically attracted to beautiful — I just start kissing them. It’s like a magnet. Just kiss. I don’t even wait. And when you’re a star, they let you do it. You can do anything.

Bush: Whatever you want.

Trump: Grab ’em by the pussy. You can do anything.

Billy Bush: Uh, yeah, those legs, all I can see is the legs.

As I watched the clip, I remember being in my home, sitting, maybe in our family room. A friend of the family noticed a framed picture of me standing on a beach in a one-piece bathing suit.

“Whoa!” he exclaimed. “Is that what your legs look like?”

I was 12 years old and he was 40, and I had known this man my entire life. He had never said anything untoward to me before or after that incident. But I can still remember the feeling of my skin crawling, of my mind questioning. I wonder: is it better that I was let in on the joke? Or better to be left in the dark the way Arianne Zucker was? Around year earlier, at summer camp, a boy a year older than I was started to show interest in me. I was flattered. I flirted. But as the days progressed, his attention moved quickly from chit chat to the physical. I was completely inexperienced and had no feelings for him, so I rebuffed his advances. Nevertheless, he greeted me each day with an unrequited hug; a meal or an evening activity found his head on my shoulder and his hand on my leg. I would brush it away, at first with a smile, and then without, and walk off to find some friends who could shield me. I walked around the rest of the summer guarded at all times possible.

Just about every woman has experienced similar, many far worse.

I would like to think that a presidential candidate bragging about sexual assault would be the tipping point for undecided voters. True, hardcore Trump fans are not going to be swayed. “It’s locker room talk,” they explain away. “It’s boys being boys,” as though they can fool an entire nation. As though men inherently are not free-thinking, intelligent, caring, or kind. But die-hard Trumpers aside, the tape certainly has been the tipping point for many, including Republican members of Congress embattled in tight re-election campaigns. In the wake of Trump’s latest scandal, it seems that droves of Republicans are denouncing him or even taking back their previous endorsements. I’m glad that bragging about sexual assault is a line they cannot cross. But it begs the question: Where the hell have they been?

We all knew who this man was: This charlatan, this egomaniac; this man-child who degrades women and mocks the physically challenged; who spews racist ideologies and refuses to condemn the alt-right, Holocaust-denying, white supremacists who stalk Jews on social media in his name; this man who makes money off of the backs of working people while taking advantage of a system that allows him to pay no taxes and simultaneously belittle those who can’t afford to pay them. This man has always shown us who he is. From his appearances on reality TV and Howard Stern to the public cheating on his wives and ogling of his daughters, Trump has never hidden who he was.

As a registered Republican voting Democrat for the first time, I appreciate the new-found Republican condemnation of Trump. As a woman for whom the words on that tape are a reminder of a dozen different incidents, that all make me feel small and scared and ashamed, I am thankful that these Republican leaders have taken a stand now against Trump. But, respectfully, they’ve already shown their cards. They had a million and one chances before now, and I’ve already lost my faith in them.

You can find more by Talia Liben Yarmush on her website. She is currently writing her first novel.