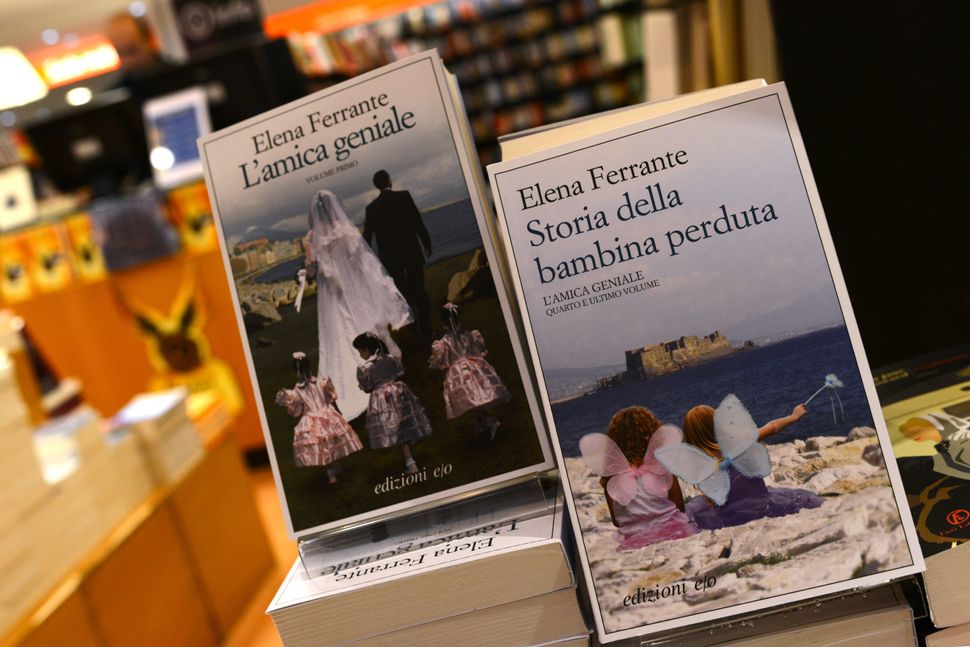 Ferrante in the original Italian. Image by Getty Images

It’s neat, in a way, that Elena Ferrante’s Jewish. Well, not Ferrante—the author behind the pseudonym. Anita Raja, the Italian translator whom Claudio Gatti has convincingly argued is Elena Ferrante, is, as Gatti recently explained in detail in the New York Review of Books, the daughter of a Holocaust survivor. Whether we think it’s terrible that Ferrante’s identity has been revealed, or sort of OK, what’s known is known. Raja is Jewish, at least by some definitions. Which is neat in the time-honored Jewish tradition (and every-group tradition) of noting whenever an impressive person shares our heritage. But there’s something particularly special about the author behind Ferrante being a Jewish woman.

If you limit “Jewish writing” to a particular narrative of alienation—a narrative grounded in the great migratory wave from the 1880s to the 1920s, from poverty and persecution in Eastern Europe or Russia to new American lives (still often impoverished; more vulnerable on these shores to prejudice than life-threatening pogroms) in New York (or, in Roth’s case, New Jersey); a narrative built around ensuing self-focused conflicts of assimilation and identity and rebellion (almost always written by male authors and featuring male protagonists)—then, you are correct.

Dreifus then offers a list of alternatives: ten novels written by Jewish women. Novels that sound fantastic, but none of whose authors are, to my knowledge, Ferrante-level headline-makers.

It’s tempting to look at the Ferrante revelation and be like, hey, male Jewish novelists, one of us lady Jews is the Greatest Author. And I say this as someone who’s read and enjoyed Arnon Grunberg’s The Jewish Messiah, Howard Jacobson’s The Finkler Question, and lots of Roth, and Bellow, and plenty more of the Jewish canon that tilts not just male but often graphically male-centric, in the US and beyond. (I’m intentionally not mentioning a not-worth-reading French installment of the genre.) I have nothing against The Narrative as a narrative. It just shouldn’t be the only one.

What jumps out at me is really that arguably the greatest Jewish woman writer of all time has given no indication in her famous novels that she’s Jewish, and had even left it ambiguous (if not that ambiguous) whether she was even a woman. Important, that is, in an era where authorial identity is so central, not just in the sense of individual identity, but in terms of identity group. (On this, see Talya Zax on Ferrante.) I read and loved the first two Neapolitan novels, but despite a fairly strong literary Jewdar, nothing pinged. (Maybe that’ll change in the third?)

I wonder if Jewish women writers—at least those aspiring to major mainstream success—are under more pressure than their male counterparts to offer a ‘universal’ narrative. Or, put another way, whether female Jewish writers have more freedom to choose the stories they wish to tell, precisely because there isn’t that presumed narrative.