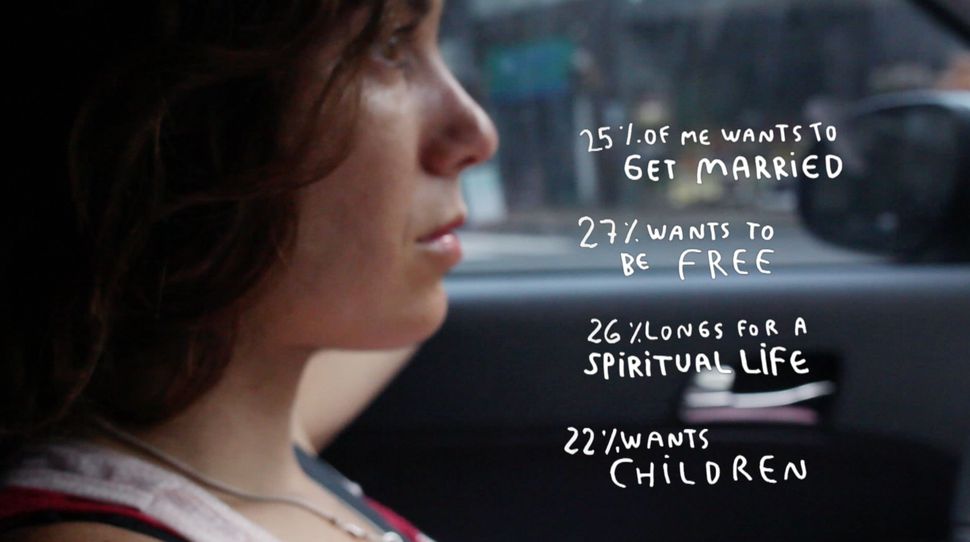 In one of the most remarkable moments in Paula Schargodorosky’s documentary, “35 and Single,” the viewer sees director, producer, and writer Schargodorosky in profile, with a handwritten list beside her face that reads: “25% of me wants to get married, 27% wants to be free, 26% longs for a spiritual life, 22% wants children.”

“I have different Paulas inside me,” said Schargodorosky, an Argentine documentary filmmaker, and award winning interactive producer, who in 2014 founded Dream Big Pictures, an emerging production company focused on telling stories through documentaries and interactive projects. “We change a lot, from one to the other, and I feel all of these different parts of me inside. That’s the main conflict I was feeling, and for me, that’s the synthesis of the film.”

“35 and Single,” which began as a 7 minute short for the New York Times Op Docs site, is now a feature film following Schargodorosky as she sifts through what it means to be in your 30s, single, and wanting to be free and independent when all your friends are getting married and having kids. “In your 20s, you can do whatever you want,” she told me. “Society is telling you that it’s good to be free, but when you turn 30, people get very conservative, they start watching you in another way, it’s derogatory, like maybe there’s something wrong with you.”

As a Sephardi Jew, Schargodorosky’s family often made toasts in Ladino, such as, “I hope to see you soon as a bride” and (if you’re married), “I hope you soon have children.” It’s also traditional in Sephardi families for relatives to get married in chronological order, so when Schargodorosky’s sister got married, followed by her youngest cousin, she began to reflect in a different way on her life. “You start questioning yourself, maybe I’m doing something wrong, everyone is going somewhere else. But I liked my life.”

“35 and Single” documents Schargodorosky’s search for answers about what she wants, and along the way, viewers also witness her experience of making the film and her development as a director. While it might seem like a personal story, Schargodorosky thinks it’s more of a generational one. The fact that one can desire multiple kinds of lives is in direct conflict with the messages many in their 30’s were brought up with. “We want everything, that’s the conflict. We still have the model that we received from our parents, but we want something different.” (In the film, Schargodorosky described her own family model as “a strong man, and a woman who followed his lead.”)

Since the release of the short, many people have reached out to her on social media, connecting about their own grappling with questions about identity, marriage, and what we want our lives to look like in relation to the messages we’ve absorbed from our families and the media. “There’s a community of people saying, ‘I felt like I was the only one,’ and now knowing that this more normal than we thought it was,” she said.

In the film, Schargodorosky travels to Italy and Uruguay, where she meets up with two former boyfriends, including Dmitri, who articulates one of the primary truths in the documentary: “Maybe the secret is not to suffer over time going by.” “The present moment is the most important,” Schargodorosky said. “You aren’t going to find the answers looking on the outside, they’re in moments of silence, in being by yourself, in being able to feel happy living with questions.”

The feature length version of “35 and Single” premiered on Saturday, October 8th, at 7 pm, on Pivot, in a joint venture with Univision.