The Joys Of Parenting In Israel On Yom Kippur 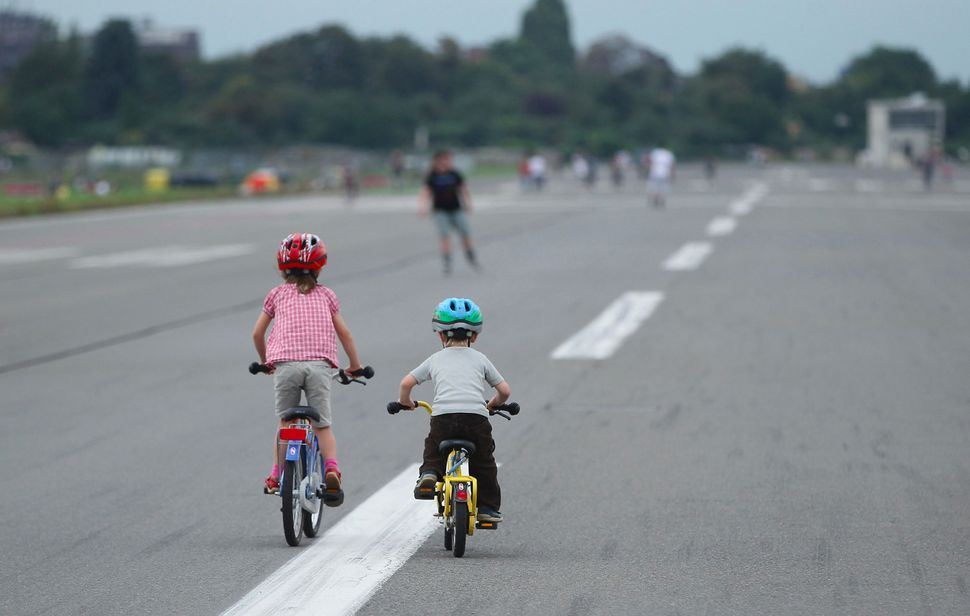 Children biking in the road in Berlin. Image by Getty Images

I am terrible at fasting, so Yom Kippur is a day I dread.

This year, though, the Day of Atonement offered a liberating surprise for me, as a transplanted mother in Israel. Between my excruciating headache and bouts of vomiting, I marveled at the amazing freedom I could give my son on this day. It’s a freedom that I couldn’t give him anywhere else.

In Israel, people in most cities don’t drive on Yom Kippur. Our streets become a huge bikeway for kids of all ages. For the past several years, my oldest has been riding around the same well-lit path, manned by vigilant parents, with his friends.

This year, armed with bigger bikes and free of training wheels, my son and his self-described “Yom Kippur posse” assumed a new tenacity. They strayed from the normal path, visiting the houses of their second-grade friends. They stopped to play in the park at the top of the hill. “We went far!”

They even jaunted downhill toward The Mall, which in their terms is like a teenager taking the subway downtown alone for the first time.

They did this all with minimal adult intervention. A few parents who live on the route kept an eye out, and others set up intermittent watch at central junctions.

Initially, I was wary. At synagogue, I begged my Sabra husband to check on him, to bring him home. “Is there a parent watching them?” I asked.

When he told me to give him a little more time, I persisted:

“It’s Yom Kippur,” he fired back. At first, I scoffed. Even after 13 years here, I retain my North American mores when it comes to parenting. I embrace schedules and boundaries, in contrast to my Israeli friends’ (and husband’s) more lenient style of parenting.

But this year, I let go. And it was an immensely gratifying experience. I am thrilled that I could give my son this privilege.

Aside from the car-free environment, Yom Kippur brings a sense of togetherness to our little neighborhood. Once the sun sets, everyone traipses down to the bike-fest’s hub—the block between the local theater and shopping center. We meet people we don’t see much outside of the class WhatsApp group and in our flurry of drop-offs and pick-ups. We catch up with old neighbors, teachers and colleagues.

Phones are sparse, so we genuinely talk.

We marvel at how much kids have grown. We gossip and laugh. We wish each other Shana Tova and Gmar Hatima Tova with meaning. It’s a pleasant change from the rushed greetings we utter as we pay our bill at the neighborhood grocery or deposit our kids at extra-curricular activities. As the golden rays entering our living room signaled that it was time for ne’ila, we told our son to meet us at the park by 6:30. He said it would be hard for him to lift the bike up dozens of stairs by himself. Don’t worry, my husband said, leave it at the bottom and come get me. “But someone will steal it,” he said.

“No one steals on Yom Kippur,” my husband replied.

As stars started to appear, men, women and children dressed in jeans, spandex and kittels gathered close to hear the final sounding of the shofar. It made me think of how it must have been in Israel long ago. It made me yearn for a more innocent time, when people would huddle around the radio to listen to news and just to be together. Community.

More significantly, this Yom Kippur made me remember why I moved to Israel. When visiting as a teenager, I was captivated by the uncompromising freedom that children and adults possess here. Despite the dangers lurking around every corner, people here are free. Gone is the helicopter parenting of my childhood, the overscheduled, overachieving lives of kids in my home country.

This reassurance came when I needed it most. With a recent upsurge in violence and worrying political trends, I have been especially pessimistic about making my life here of late. I often wonder why I have forced a childhood shadowed by war, increasing racism, and infinite tension on both my kids, when they could grow up in a country free of all that.

Yet, as my family walked home to break the fast with our neighbors and bikes, I started humming the song, “Why Can’t Every Day be Shabbat?” It’s a song every Jewish Israeli kid learns in preschool.

I want Yom Kippur every day. Why can’t the freedom, trust and togetherness we experience emerge more often?

Originally from Montreal, Melanie Takefman is a writer and communications consultant in Israel. Her book, Israel Upended, is now being submitted to publishers, and she is working on a second book about women and migration.

The Joys Of Parenting In Israel On Yom Kippur