Donald Trump’s Groping Is All About Power — Not Sex 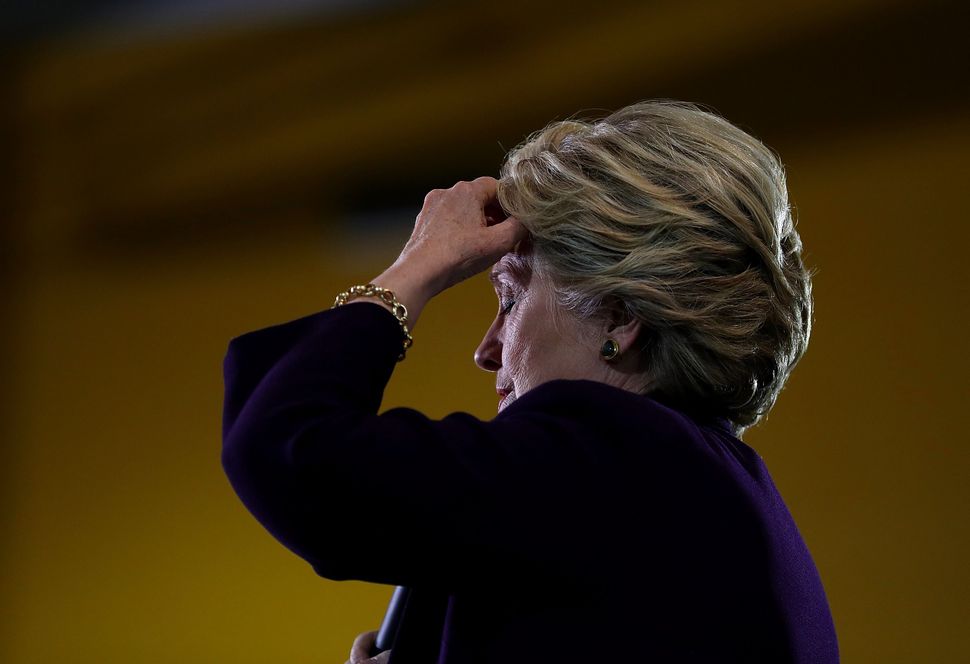 The uphill battle of being a female candidate. Image by Getty Images

The hypothetical of the moment goes as follows: what if Hillary Clinton were the candidate grabbing opposite-sex colleagues without their consent? What if men, rather than women, were being objectified and drooled over during the presidential election?

The same question has been posed (at least) twice in the past few days. Most recently, there was this weekend’s Nicholas Kristof column, in which the New York Times columnist enumerates some of Donald Trump’s more outrageous statements and behaviors (“Imagine if she had bragged about her attempts to commit adultery”, etc.) asking the reader to picture how things would go if Clinton, rather than Trump were the one who’d done them. Kristof concludes that there’s a “double standard” afoot, which, yes.

But the same point may have been made even more persuasively last week, in a satirical New York Magazine piece by Liz Meriwether called “Hillary Clinton’s Locker-Room Talk.” It’s an indescribable piece of writing, but I’ll do my best: It’s a NSFW future-looking counterfactual, riffing off Trump’s “locker room talk” remarks, where a President Hillary Clinton is in an actual locker room, grabbing, insulting, and objectifying such men as Mike Pence and Rudy Giuliani. While Meriwether doesn’t spell this out, what her article is asking the reader to do is to remember that an implausible outcome for a Hillary Clinton presidency would be the anticipated outcome of a Donald Trump one. Given how much Trump has already exploited his position of power relative to women he’s interacted with, imagine if he were even more powerful? Matters probably wouldn’t improve!

There are two ways to interpret the hypothetical, one helpful, one less so. The less-helpful approach is to suggest that a woman president would be great because women (or at least successful professional women of a certain age) are these almost sexless beings who wouldn’t even think of men in inappropriate ways. Further, it’s to suggest that there’s something inherently comical about men being objectified. (I’m thinking of the Theresa May’s husband looking hot in a suit meme from a while back.) This interpretation almost gets at the problem, but veers off into reinforcing sexism.

The correct interpretation is to remember that of course adults of all ages and genders are admiring and (silently) objectifying one another all the time. Yes, that includes women of a certain age gazing at men. What’s particular to Trump isn’t the experience of lust, but the abuse of power involved in how they express that sentiment. This isn’t about men having needs or whatever. It’s about the public performance of male heterosexuality as an exploitative power play.

Donald Trump’s Groping Is All About Power — Not Sex