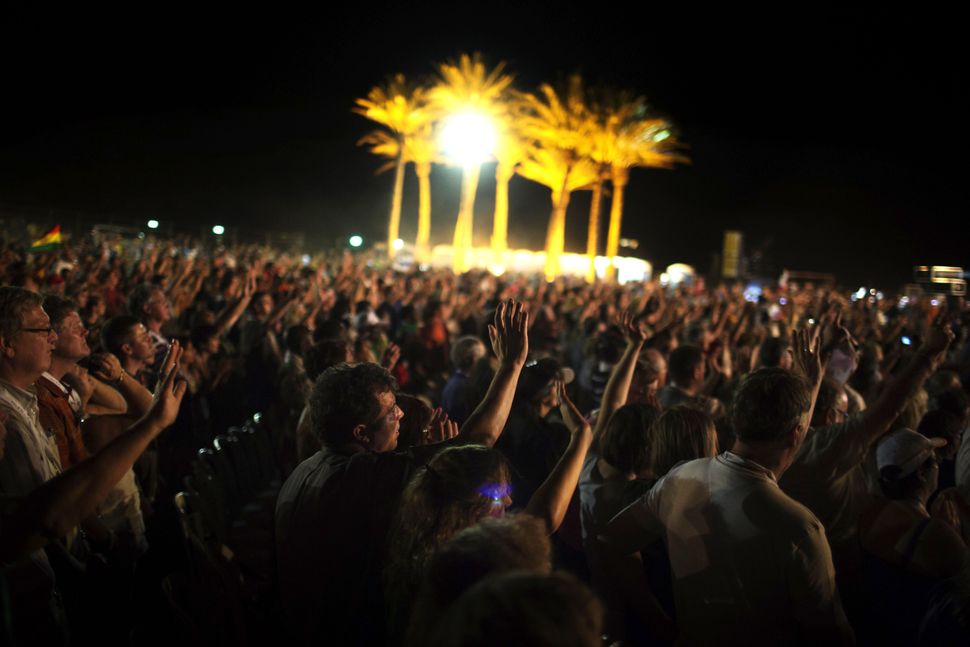 The universal pull of Sukkot. Image by Getty Images

When I was 12 I asked my mom to take me to church so I could learn about religion. I grew up in a secular Christian household. My religious upbringing was full of questions without answers and a sense that there must be something more out there. Though we celebrated secular Christmases and Easters at home, I didn’t belong to any faith and was starting to feel restless by that age, as though I had no path to follow.

Fast forward a few decades and I’m looking at my own daughter, my oldest, whose childhood has been so different, religiously, from mine, and whose bat mitzvah is only a year away.

The thought of planning a daughter’s coming-of-age celebration is foreign to me. At a time when I was just starting to look for a path, she’s reaching the end of this part of her religious upbringing.

While meeting with our rabbi to start thinking about Shira’s bat mitzvah, my husband and I stumbled on the idea of holding the event during Sukkot. When my father had a massive heart attack a few years ago and pulled through but was still in rehab as we neared the High Holidays, my husband drew up plans for a homemade sukkah and said, “Let’s do Sukkot at home.” Focusing on a hands-on activity and building a sukkah took our minds off worries over my dad weaning from a trach and learning to eat again and brought the three of us — my husband, daughter, and I — into our home and backyard after the long stretches of time spent in hospitals and rehab centers.

Sukkot, already a welcome holiday for us after the formality of Rosh Hashanah and Yom Kippur, continues to be a bridge linking our family and Judaism, and it seems like a fitting time for a family celebration, for Shira’s bat mitzvah. As Rabbi Nachman of Breslov said, the whole world is a very narrow bridge; the important thing is not to be afraid. There is a lot to fear, but as a family, we always trek on, and every year since my Dad’s heart attack, up goes the sukkah.

I chose the Hebrew name Selilah, a word meaning path, when I converted, and my path leading up to conversion was narrow and twisting and turning, from a 12-year-old girl asking her mother to take her to church so she could learn about G-d, to today, a loving, if unconventional, Jewish mother with a 12-year-old of her own.

Of all the ways things could have gone, I have followed a strange, narrow path indeed. So why shouldn’t my daughter’s be as well? Though my daughter might not have the temperament to stand up and chant Torah or bask in the glow of a crowd of congregants watching her, she is finding her own way.

When we brought up the idea of a Sukkot simcha to my daughter, she asked if she could sleep in the sukkah, something we’ve never done in our sukkah at home. Black bears roam through our neighborhood in the weeks leading up to the start of winter, scrounging for every last bit of food closer and closer to our front door. We’ve had daytime and evening meals in the sukkah and taken walks through the neighborhood in the twilight, but staying all night in the backyard — no, we haven’t tried that.

Should we spend a night in the shul’s sukkah, though, I will remember not to be afraid as I cross that very narrow bridge from the sanctuary to the courtyard and sukkah.

As we plan an unconventional bat mitzvah, and as Shira crosses the bridge into adulthood, I am reminded that it’s the same narrow bridge all Jewish children cross, and though she may not find a turning point in getting called up to the Torah on her twelfth birthday, she will find it, maybe at 2 am in a sukkah, maybe at 4 pm playing with her sister after school, or maybe at 6 o’clock on a Friday as we usher in Shabbat at home. And whenever Shira stands up for an aliyah, may she find the courage to cross that narrow bridge up onto the bima without fear and with the pride of knowing she is home.

Amy D. Lerner is a freelance editor, writer and wife and mother of two girls. She lives in Harrisburg, Pennsylvania, and blogs along with the rest of her family.