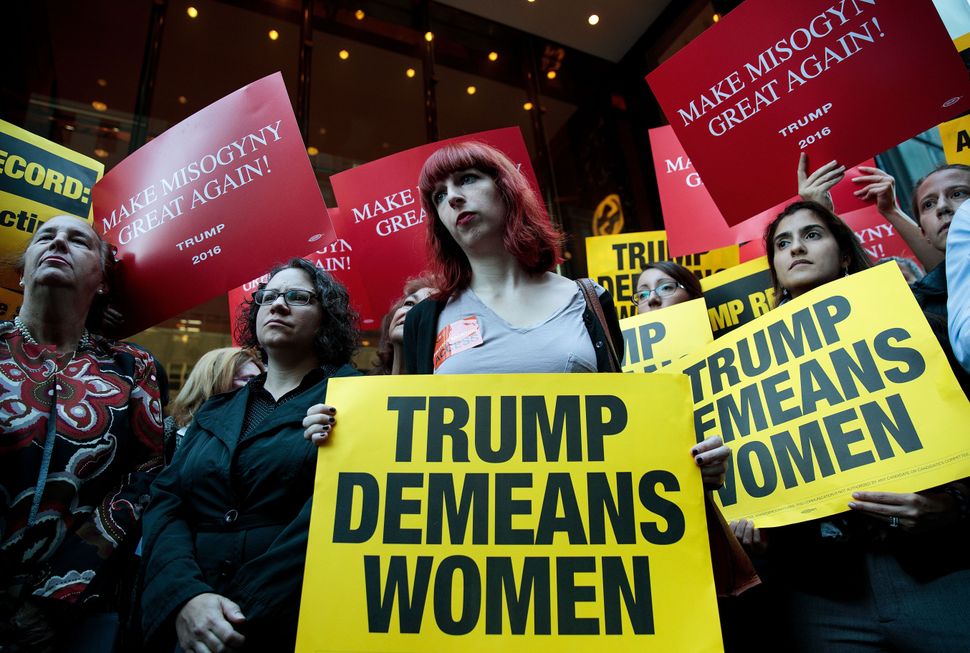 The anti-Trump anti-rape-culture consciousness-raising in action. Image by Getty Images

When I first saw the infamous Donald Trump Access Hollywood video a few weeks ago, in which he bragged to Billy Bush about sexually assaulting women, I instantly felt sick, enraged, and dizzyingly triggered. Little did I know that women all over the country – and perhaps the world – felt exactly as I did.

With my heart-rate elevated, shaky hands and a hot, almost feral anxiety cascading through my body – I spent that first weekend remembering all the times men and boys have sexually harassed me, verbally and physically. Whether it’s an “average” man or boy or a celebrity, girls learn to armor themselves early.

I developed at a young age. In 6th grade, the boy who sat behind me in homeroom would constantly snap my bra, calling attention to the fact that I was one of the first girls in our class compelled to wear one. Mostly I would turn beet red and ignore it. One day I snapped back – yelling STOP IT so loud that my homeroom teacher then yelled at me. I didn’t understand why I was in trouble when I was the one being harassed, but the lesson was clear, and it marked me for years to come. I was twelve.

After school, hanging out with friends, a boy invited me to try his new gravity boots – to hang upside down from a bar suspended from his doorframe. This boy was not someone that I was interested in – I thought we were friends. He locked me into the boots and I giddily swung my arms down. It only took a few seconds for him to reach under my shirt and grope my breasts, while I was defenseless. I silently cried and struggled and said, “Please stop.” Eventually he let me down. Soon after, another boy chased me from my front porch, knocked me down on my lawn, and reached under my shirt to grope my breasts. I didn’t tell anyone – I felt ashamed and responsible. I was thirteen.

The Long Island beach club where I summered was often the setting for editorial spreads and commercials, including a Vanity Fair shoot with Sylvester Stallone and his then-girlfriend, Bridget Neilson. All the kids were asked to pose in the pool, to be part of the background. Later that afternoon, a lifeguard I was friends with told me that Stallone said this to him: “Tell that blond girl in the bikini that I want to suck her little titties.” I was fourteen.

Later in high school, when I asked a bunch of male friends if I could play Dungeons and Dragons with them, one of them said, “Yes, but only if we can rape your character.” The rest of them laughed hysterically. Eager to learn D & D, I sat through one evening, but that was all I could take. I was sixteen.

During my freshman year at NYU, a friend’s fraternity brother held me down in his bed until I threatened to scream just as the DJ stopped spinning. He would’ve continued to violate me if the loud music outside hadn’t been turned off, so people might hear me. I was eighteen.

One night while out at a club in LA, Mike Tyson, surrounded by his body guards, reached out and grabbed one of my breasts as if he was grabbing a beer off the bar. I was standing next to my college boyfriend at the time. I looked right into Tyson’s face, stunned, and he childishly smiled at me, as if to say “I take what’s mine and it’s no big deal.” I was twenty-two.

I was roofied and date-raped after going out on a first date with a man I met on J-date, of all places. I went out with him because he seemed like a nice Jewish boy. I confronted him by email a few days later, when I began to remember all the details. He responded, “You’re a liar. You wanted it. No one will believe you.” I talked to a friend about reporting him, but never went through with it. I just wanted to forget, and I did until last week, when Donald Trump went on the debate stage and denied that he ever did the things he bragged about doing in the video. Whether you’re being held down by a fraternity boy, date-raped by a “nice guy” or groped by a celebrity, the trauma is exactly the same. I was thirty-four.

Here’s the thing – my own stories of assault are nothing compared to some women that I know. Women who’ve been dragged and beaten and brutally raped and left for dead, verbally abused and raped by long-term partners, molested by family members. We must recognize the continuum from “locker room talk” to Brock Turner: it’s a startlingly thin line. This is why we call it rape culture.

Once we are violated, we expect not to be believed. We expect to be blamed. This is as much like clockwork as the assault itself. We wonder: was our skirt too short? Did we act too friendly? Why didn’t we fight back?

Objectification of our bodies so common, often so casual, that most women are inured to it. We armor ourselves against it every single time we leave the house. This trauma-laden daily exercise – steeling yourself against unwanted attention – is as compulsory as brushing one’s teeth.

We are all PTSD victims, in a way – walking around in our bodies, knowing that sexual assault can happen at any moment, with all our past violations stored in the hidden parts of our psyche, just to get through the day. We do this so that we can be “normal.” It is not normal, and as the hashtag that emerged after the Trump tape so eloquently stated – it’s #notokay.

But there’s a reason for us to thank Trump, as strange as that sounds. The tape: evidence of toxic male entitlement writ large – it’s woken us up en masse. The collective retelling of our stories, the callout to women to talk about their first assaults — it’s bringing us all together in a historic moment of consciousness-raising. It’s about a lot more than this election, of course, but I hope it will have a lasting impact on our personal and political lives.

One more story: I was once almost literally “grabbed by the pussy” while walking in my West Village neighborhood with my mother about ten years ago. A man casually walked toward me and then violently lunged himself between my legs with both hands. My reflex was to hit him with my purse (luckily I was carrying a heavy, hard-shelled bag that day) and I slammed him in the head. He ran away. It was one of the few times I knew, instinctively, that it was not okay – and I acted before I could think. I will always do this from now on, and if I see my sisters on the street or the subway enduring harassment – I will speak up for them.

Pussy has long been one of my favorite words. I’ve always found it to be sexy and empowering. I hate that it’s ever used pejoratively – as if to say that having lady parts is a sign of weakness. It’s precisely the opposite – and everything that women have been forced to endure for centuries – well, that, to me, is evidence of just how ridiculously powerful we are. We endure and we rise.

Let’s never, ever forget that telling our stories, coming forward, calling out assaults big and small, teaching our girls that saying “This is not okay” is right and just and necessary – let’s never forget that this is how we begin to end rape culture, once and for all.