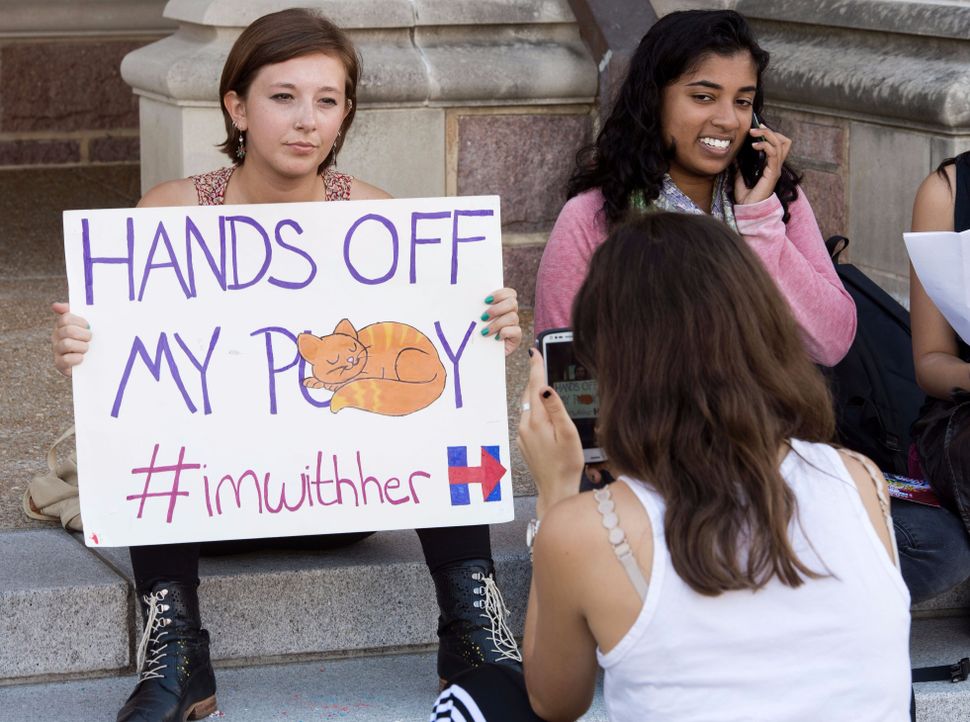 This morning, in the Washington Post, Carl Paladino was quoted as saying that Donald Trump’s leaked ‘gutter talk’ about women was something ‘all men do, at least all normal men.’”

If this is true, we’re all in big trouble, because what Trump did in his conversation with Billy Bush (besides bragging about sexual assault) was – as he’s done with Muslims, Latinos, African-Americans, and so many others – to deny women’s humanity and subjectivity. He failed, as he has so many times, to allow that women are more than their appearance, more than objects to be acquired and admired by powerful men. This is a product, of course, of Trump’s own entitlement and narcissism, but must also be seen in the context of right-wing culture wars in which women are reduced, over and over again, to a collection body parts, objects whose bodies men are entitled to use and control. The most vocal opponents of Planned Parenthood who deny women ownership and agency over their own bodies and family planning while making those bodies a battleground for debates about values and legislation are as much a part of the problem as locker room talk.

Because the truth is, Trump just followed this logic to its natural conclusion: Women’s bodies are not their own. Men, driven by their desire, are entitled to said bodies, and to sexual favors and access whenever and wherever they want (regardless of marital vows, desire, or consent).

There’s a term for this that’s been around for decades: rape culture. Trump is both its perpetuator and beneficiary. He also is a product of it. Trump’s ‘gutter talk’ while it may be something that ‘all men do’, or have done, or have, at the very least witnessed, is the product of a culture where men in powerful positions feel entitled to talk about (and in the worst cases, use) women’s bodies without regard for their humanity. As any woman who has ever been sexually harassed in a professional context knows (and speaking personally, I can attest – it happens to everyone, even female rabbis) it’s not ultimately sexual desire that drives this demeaning and dehumanizing language and behavior. It’s a far more insidious desire to deny women power, and humanity.

I, like so many women across America, was horrified by the tape. But I was not shocked. Because we know: until the culture changes, and women are viewed as human beings in their own right, there will be more Donald Trumps. The reason we are so dismayed by this one is that he’s a contender for the presidency. And until objectifying and dehumanizing beautiful – and non-beautiful women becomes the relic of a more barbaric time, there will be more like him.

Rabbi Jordie Gerson is an accomplished writer and speaker with a blog at the Huffington Post. To read more of her articles, sermons and talks, find her here.