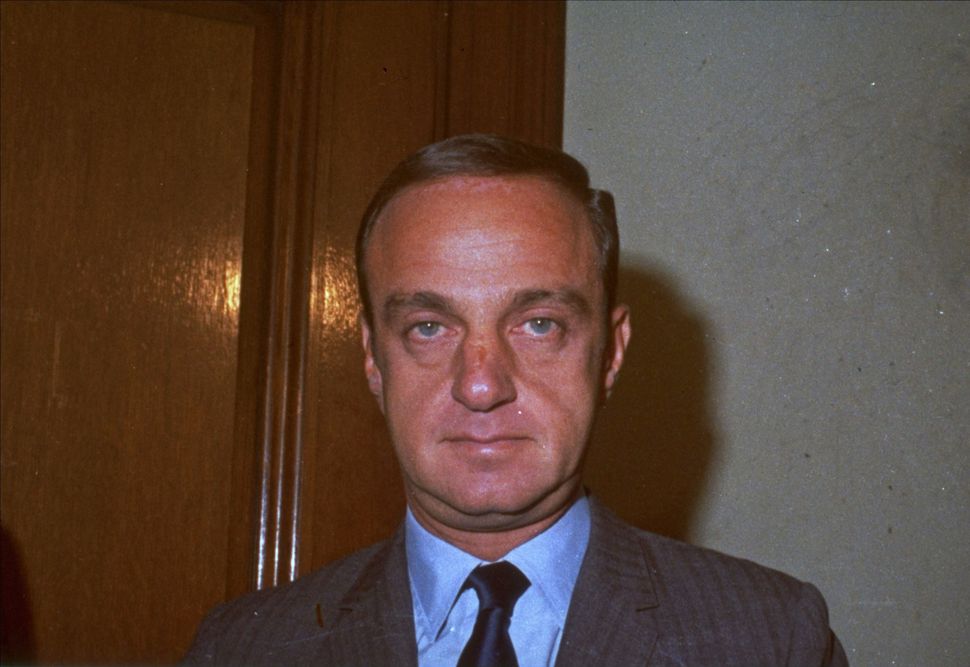 Lurking behind the obvious query of how in the world Donald Trump became an actual candidate for the presidency of the United States, there’s a more basic question: Where in the world did this man come from? How did he become the walking caricature that he is today?

One answer that’s frequently given is his father. Fred Trump, the real estate developer who time and time again bailed out his son from his many business failures, established racist, discriminatory housing policies that defined his son’s early career, and set the precedent for Trump men having no problem associating with white supremacists and the Klu Klux Klan, definitely had an impact on The Donald.

But there’s another mentor who arguably had a much bigger impact on the Trump we see today, and that’s none other than Roy Cohn.

Those familiar with 20th-century American Jewish history will know Cohn as the man who made his name as Joseph McCarthy’s red-baiting right-hand man, a key figure in the execution of the Rosenbergs and the general paranoiac terror of the Red Scare that followed. By the time he met a then-27-year-old Trump in 1977, he was New York’s most well known, feared and notoriously vicious lawyer, with clients who ranged from George Steinbrenner to the Archdiocese of New York to mafia dons like Anthony “Fat Tony” Salerno. As Michael Kruse recently pointed out in Politico, Trump apparently sought Cohn’s legal advice: he and his father were being sued by the Civil Rights Division of the Justice Department for their refusal to rent to black tenants, and his attorneys had suggested they settle. Instead, Trump recalled that Cohn advised him to “tell them to go to hell and fight the thing in court,” which they went on to do, with Cohn employed as lead attorney.

Cohn fought the case with signature levels of audacity and bluster; he not only attempted to countersue for $100 million, but spent nearly the entire trial personally insulting and mocking the case and the people who brought it to court. Though the case ultimately ended in the Trumps settling and agreeing to take measures to open Trump projects to black tenants, they managed to add a stipulation that at no point would they have to admit guilt. Both Trump and Cohn publicly touted this as a victory.

The housing case was the beginning of a long relationship between Trump and Cohn. Cohn would use his connections in government and the mafia to garner massive tax abatements, zoning variances and mob-controlled concrete work, without which Trump’s Grand Hyatt Hotel, Trump Plaza and Trump Tower projects never would have been possible. When Trump became the owner of the New Jersey Generals, a USFL team, Cohn would file a headline-grabbing antitrust suit against the NFL, claiming the league had an illegal monopoly. Cohn would even draw up Trump’s pre-nup to his first wife, Ivana, which was notoriously stingy in its allotments, and which would prove not to have provided Ivana with sufficient legal counsel—as the lawyer Cohn chose to represent her was a close friend and colleague.

The relationship went beyond the realm of the professional: Cohn and Trump were close, personal friends. They would lunch at New York’s most expensive restaurants, attend Yankee games in Steinbrenner’s box, and sail on Cohn’s yacht. Cohn would advise Trump in every aspect of his life, business and personal: for years, they would talk on the phone up to five times a day.

Most telling, though, and arguably most troubling, are the clear and profoundly evident lessons Trump learned from his mentor, lessons he continues to put into practice today.

Cohn, for one, was a master manipulator of the press, and his relationship with the media was defined by garnering as much press as possible — good or bad — and using it to his advantage. This relationship began during the Rosenberg trial, during which he became a household name for being willing to twist the facts to his own advantage, and for continuing to defend his actions (alongside those of McCarthy and J. Edgar Hoover) during the Red Scare and after it died down. At the height of his power as a New York attorney, Cohn’s public, outrageous displays of viciousness, strong-arming, manipulation, defrauding and general use of dirty tricks made him notorious, but he only used that notoriety to continue attracting powerful clients and give off an air of importance and invulnerability. Reporter Wayne Barrett, who covered Cohn over many years, says that Cohn would often tell him, “Wayne, you’ve written 34 stories on me and never said a good word. You have no idea how many clients you’ve created for me.”

Trump’s campaign, defined as it has been by somehow spinning even the most vicious takedowns of his increasingly outrageous actions and sound bites into good press among his constituents, has a clear place of origin.

Another key lesson Trump took from Cohn is his style of argument, if it could be called that: When confronted with a factual or ideological attack, counterattack in the most bombastic way possible. Like his mentor, Trump responds to questions about policy and the veracity of his statements with personal attacks and similar outrageous, irrelevant deflections. As Cohn did during the Red Scare, Trump uses conspiratorial language and unfounded claims in place of actual substantive argument, from Birtherism to the many faces of Straw Man Hillary (be she crooked Hillary, frail and dying Hillary, or woman-hating Hillary on any given day).

Like Cohn, Trump learned to be a walking contradiction for his own personal gain. As Kruse wrote in Politico, Cohn was “a homosexual homophobe, vehemently closeted but insatiably promiscuous,” and “a Jewish anti-Semite,” trafficking in anti-Jewish sentiment to further his cause during the Red Scare (up to and including the trials of the Rosenbergs and their resulting execution). Today, Trump is a multi-millionaire with a history of labor exploitation trafficking in populist, working-class rhetoric. He is wildly anti-immigrant despite having both an immigrant mother and an immigrant wife, and claims to support traditional “family values” despite having five children with three different mothers and, much more importantly, a long history of sexual harassment and assault allegations.

However, of all the lessons Trump learned from Cohn, one is arguably the most troubling. Cohn was a master at exploiting the fear of the other: be they communists, Jews, queer people, people of color, intellectuals, or anyone they could arguably deem “suspect” to the national character. He effectively used this fear to target and destroy the lives of many people, all ultimately in the interest of personal power. The parallel here is startlingly easy to see. Trump’s outright bigotry during this election, specifically against Latinos and Muslims, as well as his appeal to the blatant racism and anti-Semitism of a large, vocal segment of his followers, is easy to track back to Cohn and his Red Scare era tactics.

When I first heard that Roy Cohn was Trump’s mentor, my reaction was surprise, if only because it seemed like a bizarre political mash-up out of the realm of fan fiction. Once you really think about it, however, the real unsettling shock about Cohn’s mentorship of Trump is how much sense it makes, and how brazenly the student is emulating his teacher.