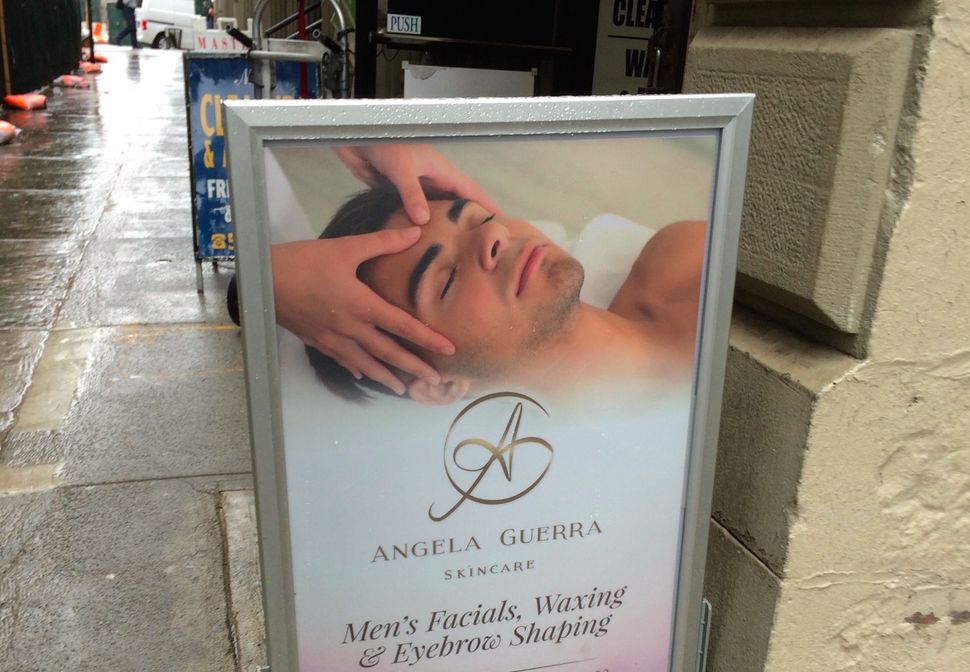 I was recently at a Cos store in lower Manhattan, browsing the minimalist Scandinavian fashions alongside some Hasidic women and children when I suddenly noticed that there were men with them as well. I say “suddenly” because what I immediately noticed was that the men were wearing shtreimels, the large fur hats some observant Jewish men wear on holidays. The men in the group were, by virtue of the hats in question, dressed so much more strikingly than the women (particularly given the weather; it’s not really the season for non-ceremonial fur hats), and the streimels looked so unexpectedly of a piece with the overall aesthetic of the store.

The point of that interlude is that there’s nothing essential about women taking great care of their visual self-presentation and men just sort of putting on whatever’s on top of the clean-ish laundry pile. Also that there’s specifically Jewish precedent for male done-up-ness, for lack of a better term, at times exceeding female.

Male beauty, in the sense of makeup and skincare, is having a moment in the culture at large. Feminist critics are praising the new “Cover Boy” – that is, 17-year-old James Charles’s debut as the face of CoverGirl. Amanda Hess writes about how liberating it can be to watch men both subvert gender norms and enjoy makeup in a paradoxically less-fraught way than women can, given the expectations on us to wear the stuff. Lux Alptraum, meanwhile, argues that introducing makeup to the gender-conforming male norm will even things out in terms of the burden of each gender’s morning routine. And spurred by a different commercial development, a new men’s skincare website, the Guardian ran interviews with male journalists about their moisturizing habits and so forth.

The big-picture takeaway from this development is, I suppose, the possibility that gender itself will be transcended in a generation or so. Led by a cohort of millennial-and-younger beauty writers and icons, maybe we’ll have a future where no one’s held back by gendered expectations, in makeup or any other facet of our lives.

But as with other (attempted) introductions of male primping to the contemporary Western consumer, there’s the unmissable sense that one is being sold something. And what will get sold, most likely, are skincare products, not color cosmetics. A man in visible makeup (and given that we’re used to seeing men in no makeup, that would include natural-look makeup that isn’t noticed on women) continues to read as gender non-conforming, and since the post-gender utopia hasn’t yet arrived, I suspect most men, including most gay men, will steer clear. What may await us is the dubious triumph of men and women alike having to wonder whether everything that went wrong on a given day would have gone right, had they only gone in for eye cream in their early 20s.