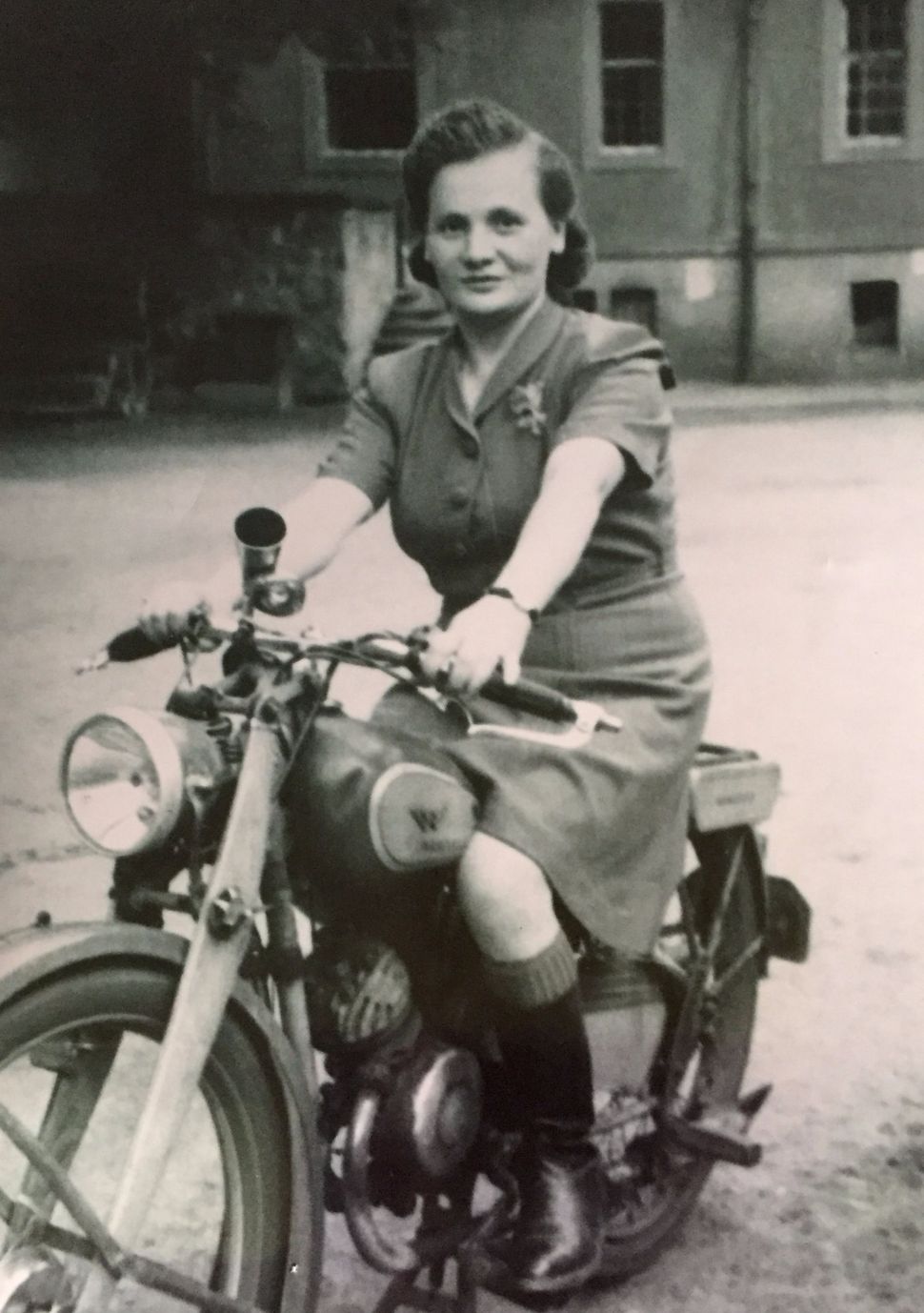 Image by Courtesy of Solvej Schou

My grandmother Ethel was a Jewish-Polish Holocaust survivor.

Lines curled down her face and in the creases of her lips, showing every year she survived. Her dyed reddish poof of hair, over time, turned grey. She would place her hand, in a fist, over her heart. She was the strongest person I’ve ever known.

“If Hitler would have computers, like they have here, now, he would take the world,” she said in her thick Yiddish accent in a video testimony in 1990. She stared straight at the camera. She didn’t turn away. She died not long after, in 1994.

She had immigrated to the U.S., and Los Angeles, in 1949, post World War II, with my then 3-month-old late mom, who was born in a German displaced persons camp. My grandma’s 6-year-old son, her six siblings, her cousins, nephews, nieces – all except for one niece, and my late grandpa – had been murdered by the Nazis in Europe. “Burnt,” she called it. My grandma, imprisoned in a forced labor ammunitions camp in Poland, survived.

Little could she have imagined that Donald Trump, decades after that video, now in 2016, would have a computer, would have Twitter, would have the Ku Klux Klan enthusiastically endorsing him, and would be elected president of the United States after sewing seeds of anti-immigrant xenophobia for 18 months.

Today, being the American child or grandchild of a Holocaust survivor means living with secrets buried deep inside. Secrets of murder, of violence, of death, of displacement, of persecution, of bigotry, of hatred, of loss. Secrets you know are soaked in filth and blood, and rarely talked about, or talked about with perimeters. You are acutely aware of the fragility of life, and are weighted by the guilt of not experiencing the trauma your parent or grandparent endured in Europe, and weighted by both the gratitude and guilt of reaping the potential benefits of their rebuilt livelihoods in the U.S., even after they’re long gone.

My grandma had a narrative about what she went through, repeated over and over to me as a kid and teen growing up in L.A. A fixed story that never fully revealed everything. That would be too painful. That would rip open a wound already embedded in her memory every day.

Later, as a Barnard College student taking a class at Columbia University called “Holocaust Literature and Film,” in which every student, like me, was Jewish and the grandchild of a survivor, I learned about “the during.” That many Holocaust survivors live, in their mind and soul, in that place of horror, no matter what came before or what came after. To be a survivor means keeping secrets buried in the cracks of your mind. To be a survivor means living, but also being numb.

“It’s going to go through 100 years, and they’re going to say, ‘It’s not true.’ But it’s true,” my grandma said. “What they show on television, what they show in the books, is not 1 percent what I saw there myself.”

With the youngest Holocaust survivors now in their early 70s, soon their stories told in person will be gone. The collective memories of Jews targeted during World War II for their religion, their culture, their ethnicity – not being allowed to go to school, then kept in ghettos, then rounded up and selected to live or die – will only remain through survivor stories captured on video. Those videos are lifelines of history and bearing witness.

So within this fresh reality of a soon-to-be President Trump new world order, couched in racist, sexist and homophobic rhetoric and campaign promises of building a wall alongside Mexico, deporting undocumented immigrants and banning Muslim people from entering the U.S., the idea of bearing witness to atrocities and the path to atrocities has lodged itself deeply in my brain.

Raised in a very religious Jewish home in a small town in Poland, with an elementary school education, my grandma was self-educated and learned how to speak five languages: Polish, Yiddish, English, German, Hebrew. She inherited traditional customs, but her chutzpah soul made her, in many ways, a modern Jewish feminist warrior, and she bore witness.

When the war first started in 1939, my grandpa fled to Russia, and my grandma and their son went to Poland’s Warsaw ghetto. In 1940, they were taken from their beds during the middle of the night, and my grandma never saw her son again.

“When they invaded Warsaw, they made a selection, they selected who is healthy, and who is looking pale,” she said. “It’s hard not to look pale when you live off of a piece of bread.”

She was put on a train car without food and water for three days and nights, and sent to the camp. Unlike me, with my dark curly hair, my grandma was “blonde like a Gentile,” she said in the video. “I saw things – it’s not to describe – all by myself. I was three times put out to be shot,” she said. She was selected three times, as well, to be sent to the crematorium.

She once saw a woman giving birth in the barracks, then hide her infant son for three days, until a watchman killed the baby in front of them. “He took the child, made like this [pinching her nose, then flinging her hand to the side], and that’s all,” my grandma said.

When she and other Jews were liberated on January 17, 1945, she had no shoes, no clothes and could hardly walk. She was alone.

“I said, ‘We are going to be free, or we’re going to die.’ … To my home, I even don’t go,” she said. “Everybody was burnt, my whole family, my son. Everybody went to crematorium.”

Later that year, she randomly and miraculously saw my grandpa walking down the street. She hadn’t seen him in six years, and hadn’t known if he was alive or dead. They reunited, and my grandma became pregnant with my mom, and they came to America. They became citizens, put down roots, worked hard and in many ways lived the American Dream. My grandpa passed away of cancer when my mom was 13, and my grandma remarried another Holocaust survivor, who I grew up with loving as my zaide, my grandpa. Even when my mom passed away from breast cancer, when I was a kid, my grandma let out emotion but also steeled herself, already defined by survival and sorrow.

Freedom, amid loss, remained vital to her.

So when I think of the potential for complacency in the face of bigotry and religious and racial discrimination, especially post-election, I think of her. I know I can’t, and won’t, stay silent.

“I don’t need richness. I don’t need nothing but health and independence,” my grandma said in the video.

Los Angeles native Solvej Schou is a Pasadena, California based writer with more than 15 years of experience, from staff and senior staff writer positions at The Associated Press and Entertainment Weekly to freelance stories for AP, The New York Times, Los Angeles Times and other outlets.