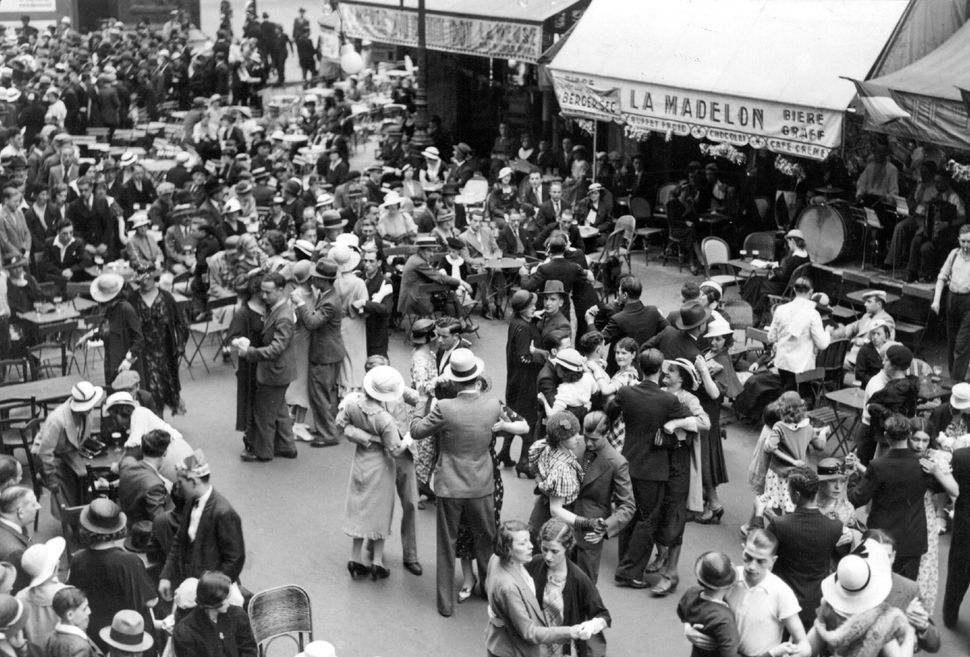 Nineteen, newly married, the check from France must seem like a windfall and a blessing. My parents are still students, accustomed to scrimping and saving and doing without. The check is for $2,000, a lot of money in 1957, especially for a bride who tried to scoop up and save the rice that was thrown in celebration at her City Hall wedding ceremony.

My mother doesn’t remember exactly what the check was for, though she thinks it was related to her father’s military service. He’d fought for France in WWII before France surrendered. After that, he was in the French Resistance, until his capture and execution at the tail end of the war. My mother was six years old when he was killed, living with her paternal aunt and uncle.

I knew about the check from my mother. I knew, too, that she hadn’t been allowed to mourn her father, whom she adored. For a long time after the war, my mother believed she saw her father in crowds, on the street, across packed auditoriums. Even after she was married and had my brother and me, these sightings occurred. I imagine that the check must have felt like a wedding gift from her father at a moment when his absence at her side would’ve been felt acutely. Wouldn’t it feel to her as if he’d offered his blessing for her new marriage?

I planned to write a short story about this situation, embellishing as I do when transforming facts into fiction. I never wrote that story because real life intervened. As I researched military benefits and reparation payments, I stumbled across information that suggested my mother, as an orphan of the Holocaust, was eligible for reparations under Prime Minister Lionel Jospin’s decree of July 7, 2000. The decree states that any French or foreign person who lost one or both parents because they died in a camp in France or in deportation or were shot when the person was not yet 21 was eligible for a settlement or a pension. The phrasing gives pause. The final possibility is the most concrete, graphic. Or maybe it only feels this way, as this is the how my grandfather died. He was taken with 119 other political prisoners from Montluc prison in Lyon to the grounds of an old fort near Saint-Genis-Laval, shot execution-style then thrown into the caretaker’s cottage, which was then burned to the ground. It was a hot day, according to reports, and the Germans and their collaborators drank confiscated champagne once their work was done.

I called my mother up and sent her the link while we talked. She assumed that the long-ago check disqualified her, but the only stipulation in Jospin’s decree was that the orphan hadn’t received life compensation money from Germany or Austria. It took several months, but eventually my mother received word that her application had been approved. She had to decide whether she wanted a lump sum or a monthly payment, and she had to arrange direct deposit with her local bank. Such ordinary things: phone calls with bank receptionists, the completion of forms, photocopying, and posting envelopes. In a certain way, the banality of these tasks speaks to the inadequacy of reparations, and sets in relief the stubborn facts: people die and can’t be returned to us. My mother doesn’t get her father back or regain a life in which she is the apple of his eye, the cherished daughter. How differently her life — and mine — might have unfolded if the history had been different.

I wonder if this is part of why some survivors and their descendants refuse reparations. The money functions as a reminder of all they’ve lost, the impossibility of its return. In an interview with Kenneth Jost, published in CQ Researcher, survivor Alicia Appelmann-Jurman says, “I do not want my father’s teeth. I do not want his medal, and I do not want my earrings. Let them be where they are.” From my family, I understand this desire to leave the past behind, but I’ve also come to see how unruly memory is, how insistent.

Rachel Hall is the author of Heirlooms, (BkMk Press) which was selected by Marge Piercy for G.S.Sharat Chandra book prize. Her stories and essays appear in such journals as The Gettysburg Review, Lilith, Guernica Daily, and LitHub. Follow her at www.rachelhall.org and @Rach_H_writer.