Not Sure What to Give This Hanukkah? Have You Considered a Rock? 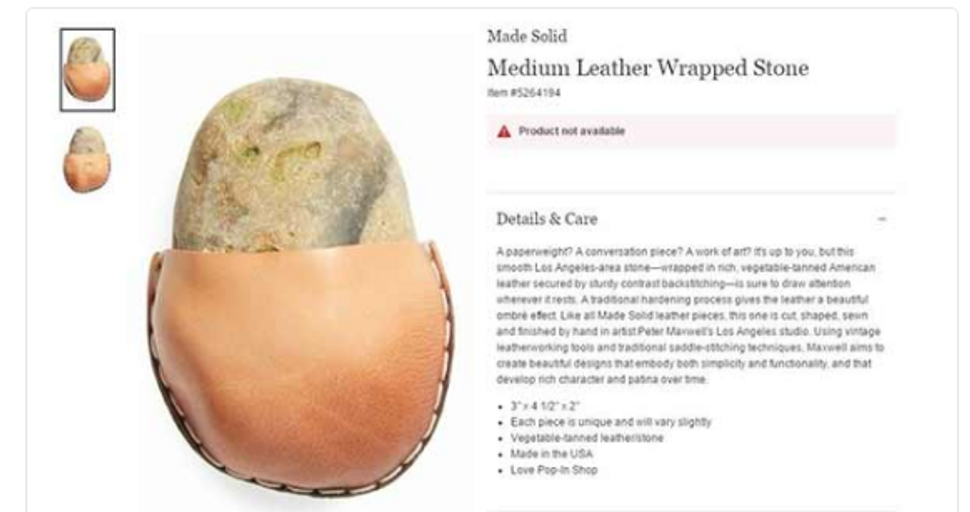 Nordstrom Rock, not to be confused with its Rack. Image by Screenshot/Twitter

It’s an annual holiday tradition to circulate and mock outrageously expensive gift guides. (Goop’s being the prime example.) But there’s a new contender: the rock-in-a-pouch. Why was Nordstrom selling a rock in a leather pouch for $85 and more to the point, why is it sold out? (Limited supply, possibly. A good rock is hard to find.)

There are competing political interpretations: on The Pool, Caroline O’Donoghue is “not saying that this rock-in-a-bag is a perfect metaphor for Donald Trump” but from the context it’s clear that yes, that is exactly what she’s saying, and she has me pretty convinced. Meanwhile, at the Cut, Anna Silman points to the potential use of rocks as self-defense tools in the coming apocalypse.

A further theory, from yours truly: A (viral) non-story about a knick-knack deflects attention from the department store’s decision to keep selling Ivanka Trump’s brand. Look, here we are, contemplating Nordstrom, which is reminding me of the great (non-Ivanka) boots I bought at the then-new Toronto store before getting enlightened about the Ivanka connection, and… the next thing you know, you’re in one of those e-commerce hazes where you forget about politics altogether. Maybe that’s the idea?

Allow me, however, one final thought about the rock-pouch: Why not a rock in a pouch? That is, why is $85 for an unclassifiable home-decor item the end of the world, but call it a sculpture (or indeed, as the website suggests, a “paperweight”) and suddenly it could go for thousands? (Note that this is all theoretical. I’m not at the life stage for spending $85 on knick-knacks, classifiable or otherwise.)

I currently own a too-small leather handbag, so small that using it requires shifting everything in my wallet into a separate, tiny wallet, which is a hassle, so the handbag doesn’t get as much use as it should. To paraphrase from a fellow Abrahamic religion, I’m in no position to cast a leather-wrapped stone.

Not Sure What to Give This Hanukkah? Have You Considered a Rock?