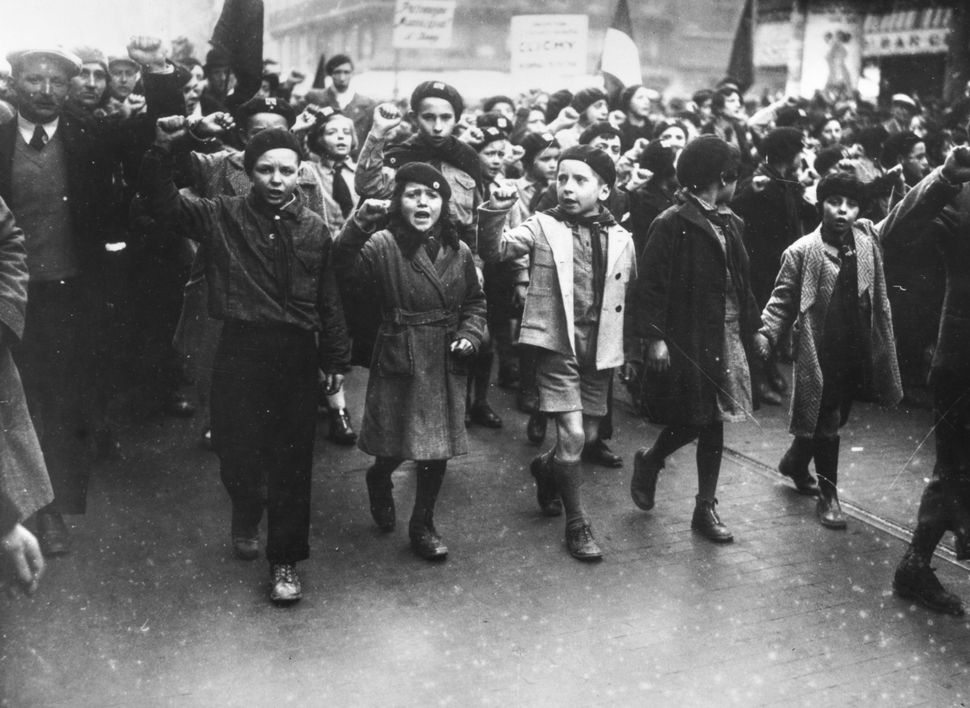 This is Part II of Rachel Hall’s essay on France and reparations. Part I appeared in November.

Some Holocaust survivors have opposed accepting reparations, particularly from Germany, saying that nothing can atone for their treatment. I imagine that accepting restitution could feel like accepting an apology, like being forced into forgiving, when forgiveness isn’t possible. The survivors remain angry, and really who can blame them for their anger, their raised fists, their railing?

Others call the collection of reparations “unseemly” and worry that it will further unleash anti-Semitism by giving the wrong impression about Jews and Jewish life before the war. Certainly not all Jews were art collectors or property owners stripped of their prime real estate by Nazi racial laws. My family, for instance, owned no property. I doubt there was so much as a gold wedding band. My grandparents were socialists, bohemians, and any extra money they had went to books or tubes of oil paint, concert tickets. The war interrupted my grandfather’s career in medicine before it had barely begun.

“Blood money,” my mother says of the reparations and her discomfort with them. It’s always too little, too late. The child in us wants what isn’t possible, the fairy tale ending — the clock turned back, tragedy averted, our father returned to us, loving and whole. Anything else is insufficient, inadequate, flimsy. And yet, restitution is the best one can reasonably hope for. “It is a matter of justice and historical truth,” said Elan Steinberg of the World Jewish League. For my mother, a sense of vindication did accompany the reparations, which she began receiving 69 years after her father’s death. “After all these years,” she says, “it was official recognition that a horrendous injustice had been committed.”

I knew, even as a little girl, that my mother had suffered two distinct losses — the heartbreaking initial loss of her father, and the compounding loss of the silence surrounding his death. One causes acute pain; the other is chronic. The refusal of countries and banks and businesses to pay reparations reveals how important restitution is. In the United States, for instance, our refusal to pay reparations to African Americans is an attempt to “cover the sin of national plunder with the sin of national lying,” says sociologist Douglas S. Massey in Ta-Nehisi Coates’ article “The Case for Reparations.” The moral debt can’t be repaid in full, but we must try nonetheless.

This summer, my mother and brother and I traveled to Saint-Genis-Laval to participate for the first time in the ceremony that each year honors my grandfather and the other Montluc prisoners executed on August 20, 1944. My mother spoke about what happened to her father and what it meant to her to lose him so long ago. The audience responded to her with warmth and gratitude. With other descendants of those killed that day, my brother and I lit votive candles on the tomb. Later, we watched as dignitaries from all over France and Europe laid wreaths in front of the tomb. We sang along — or tried — to “Le Chant des Partisans,” with it’s ruthless and strangely beautiful lyrics. In a sense, this was a belated funeral for my grandfather, the ritual my mother needed — long ago — to acknowledge her loss.

As I was preparing for our trip, I listened to an NPR interview with two men who’d be beaten into false confessions by the Chicago Police. They had finally received reparations of a hundred thousand dollars to each man. Journalist Noel King concludes the segment by saying, “I talked to a handful of men who got the reparations checks, and they all said something similar. A hundred thousand dollars is, to them, what it would be to most of us. It’s a help with the bills, a chance to spoil the family a little bit. And so they’re of two minds about getting money for torture. Yes, something is better than nothing. And no, nothing could ever be enough.”

My family is of two minds, too, not just about receiving the money, but about what to do with it. My brother suggested that that money might pay for our trip to France for this ceremony. “That seems sort of self-serving, doesn’t it?” my mother said of this idea. We also discussed donating the money to Montluc prison, which is now a museum and memorial. The curators there were incredibly knowledgeable and generous. They opened up the museum just for us and spent all day going over documents with my mother. My mother arranged to donate letters and photographs to the museum, as well as a bound collection of l’Appels (one of the newspapers published by Les Mouvements Unis de la Resistance) including articles written by her uncle. But should her reparation money go there too? It feels wrong for the money to go back to this place where her father was held captive, no matter that it is no longer a place of torture and deprivation.

My mother has said that she wants to use the money to help — in this small way — make the world a better place, something for which her father and his Resistance comrades were fighting. I appreciate this sentiment, I do. On the other hand, my mother lost her father to his ideals. Let the money, then, provide comfort, ease, a sense of plenty, things she was denied when she lost her father. If she can’t have her father’s arm to hold, let the rice lay sparkling in the sun in the wake of her wedding parade! Let her know there will be enough — food, warmth, affection — to go around. To give the money away seems like more sacrifice to me.

Of course, in the end, it’s my mother’s choice. And for now, her reparation money arrives monthly from France, direct deposited into her bank account in the college town in central Missouri where she lives, an acknowledgement of her loss, an attempt to right a wrong, and the best one can reasonably hope for.

Rachel Hall is the author of Heirlooms, (BkMk Press) which was selected by Marge Piercy for G.S.Sharat Chandra book prize. Her stories and essays appear in such journals as The Gettysburg Review, Lilith, Guernica Daily, and LitHub. Follow her at www.rachelhall.org and @Rach_H_writer.