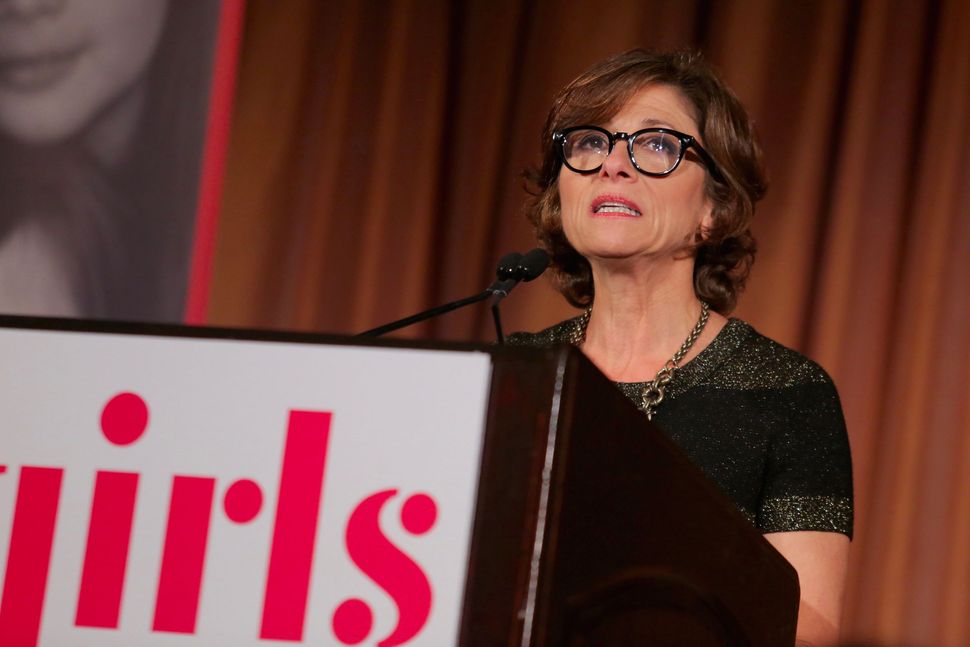 “I’m a feminist,” Nina Tassler said. “I’m sure you can gather that from our conversation.”

She’s right, of course. Figuring that out, in fact, was a no brainer. Our phone conversation, as many do recently, started with politics, and make no mistake about it: she was With Her. “I come from a long line of Democrats,” Tassler said early on, in our discussion, which soon moved on to her career.

Tassler recently retired as chair of CBS Entertainment. For a quarter century before that she held senior industry positions at CBS and Warner Bros. Television, not only breaking but shattering every glass ceiling in sight.

So it might be something of a surprise that she felt compelled to write (with Cynthia Littleton) What I Told My Daughter: Lessons From Leaders On Raising the Next Generation of Empowered Women. Or maybe not.

“When I was growing up, the current of feminism was strong,” she said in a telephone interview. “You just had to step off the bank and you’d be swept up. There was an active women’s movement. My mother was a part of it.”

Tassler was reminded of this just a few weeks before we spoke. Her mother had just passed away, and going through her things Nina found “a baggie full of all her political buttons, like Women’s Strike for Peace.”

But things have changed. “I was raised in that movement, but I kind of stopped paying attention. I thought every thing was okay. But then as my daughter was growing up I picked up my head I saw that there were a lot of mixed messages.”

She figured other mothers of her generation had the same concerns. Once the publisher okayed her idea, Tassler contacted a cross section of women — Justice Ruth Bader Ginsburg, Laura Bush and Rabbi Sharon Brous, among others — asking for essays on advice they gave their daughters.

Certainly her daughter’s activism would not have surprised her parents. Tassler, 60, was born in the Washington Heights section of Manhattan to a Latina Jewish mother and an American Jewish father:

“I have a funny story. At the time Washington Heights was all Puerto Rican and Jewish. All my mother’s friends were Jewish. And even though she was Catholic, she identified with Judaism. She’d skip Sunday school and go to [a Jewish friend’s] house for bagels and lox.”

She converted when she was 18 and married Nina’s dad three years later.

The family moved to Long Island shortly after she was born and later to Columbia County, N.Y., near the Massachusetts border, a move that in many ways formed her attitude toward life and business.

Her father inherited some land that had been on the family for three generation and once belonged to the Astor family. It had gone through various incarnations from bungalow colony to high-end summer camp and now was reborn as a kibbutz-style camp, where children from all walks of life and from all over the country came to enjoy the summers.

Now an upscale resort area, home of numerous art museums, performing arts centers and Tanglewood, the summer home of the Boston Symphony, it was far more modest them. And while many owners of the numerous summer camps in the area were Jewish, they returned to New York for the winter.

As a result, she, her sister and the pharmacist’s son were the only Jewish students in the high school. “Though I did have a core group of friends, being Latin and Jewish I felt slightly disenfranchised. What that did, I was always observing, watching behavior. I was cautious. Did someone say something anti-Semitic?”

Being an observer, she contends, trained her not to assume but make objective judgments, a knack that helped her evaluate scripts and pilots.

And while she was not a bat mitzvah — that actually happened in her mid-40s — she claims “I was always fascinated by the Torah, the bible in terms of story telling: heroes and villains, morality and flaws. There’s no better epic. Also, being part Latin and Jewish means I have a sense of the theatrical. There were always a lot of people in my house. My home was always filled with a lot of storytellers.”

She ultimately became a story-teller herself, shepherding programs such as ER and the CSI franchise from page to TV screen

Now the author and programing exec has become a new career. She’s producing The Middlesteins, based on the comic novel of the same name, about a Jewish family in Chicago splitting apart because of the love of food. It’s in development for Showtime.

Will the program make it on the air? No telling. “If there was a scientific formula to figure out works, well, then everyone would be doing it.”