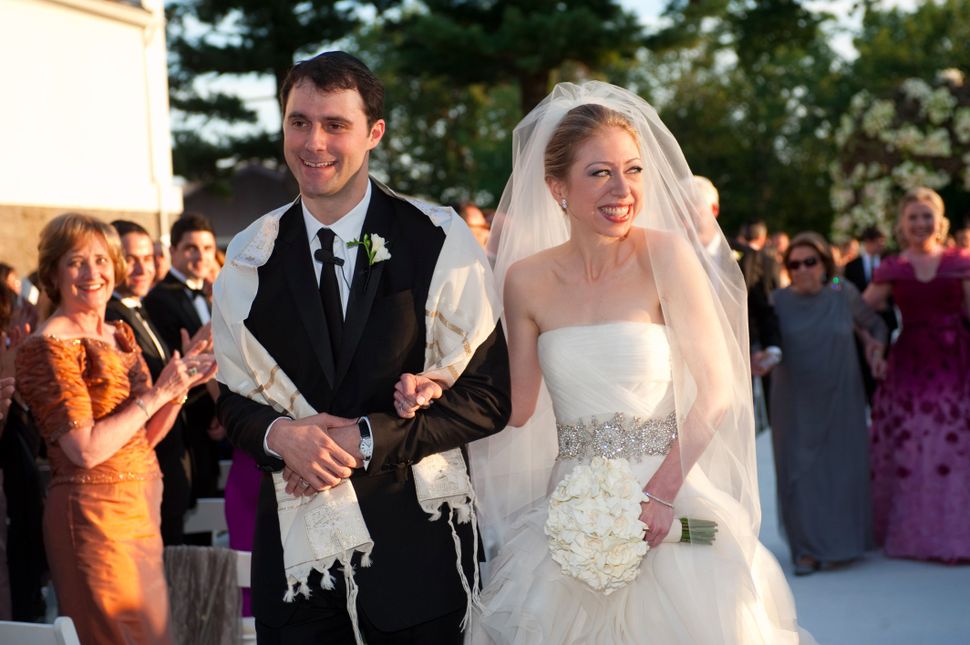 One of the better-known interfaith weddings. Image by Getty Images

In a moving essay for Catapult, Amy Beth Wright describes how her marriage to a non-Jewish man led some of her relatives to cut her out of their lives:

“In the past three years, despite being excluded from family weddings, Seders, Rosh Hashanah meals, and Shabbat dinners, I have reached out to my aunt, uncle, and cousins in ways both casual and heartfelt. I have sent texts on birthdays and emails with kosher Passover recipes, and suggested to my aunt that we meet for lunch. I’ve typed my feelings of loss gently, in emails to my aunt, and directly, to my cousin—who said in return, Unfortunately the examples we must set to enforce the importance of maintaining our Jewish identity is simply a line I cannot cross.”

Like all good personal essays, Wright’s tells an individual story and a more broadly relevant one. Here’s the part that jumped out: “Twelve years after first moving to New York [after college], Derek, who is now my husband, and I moved in together.” Even if we place college graduation at 21, an estimate on the younger end of the likely range, that would have made her 33 when she moved in with her now-husband. I say this not to call 33 ancient (I am extremely biased toward thinking 33 is not ancient!), but to emphasize that, by the time intermarriage reached the horizon, Wright was an adult with life experiences behind her. Indeed, her very next sentence reads, “I’d struggled for a long time in relationships, often holding onto painful entanglements.”

It’s fine to have whichever abstract notions you want about whether intermarriage helps or hurts the Jewish people. It is, however, basic human decency to respect the consensual, committed, loving relationships your loved ones wind up in. But it’s especially so once we’re talking about adults who’ve reached the life stage where it’s very likely going to have been a choice between the partner you for whatever reason don’t find acceptable and remaining alone. Not that the latter is a tragic outcome — see another great recent personal essay, this one by Aimée Lutkin — but it is an immensely painful one to will on someone who has found the person with whom they wish to spend their life.