Intermarriage in the Post-“Fiddler” Age 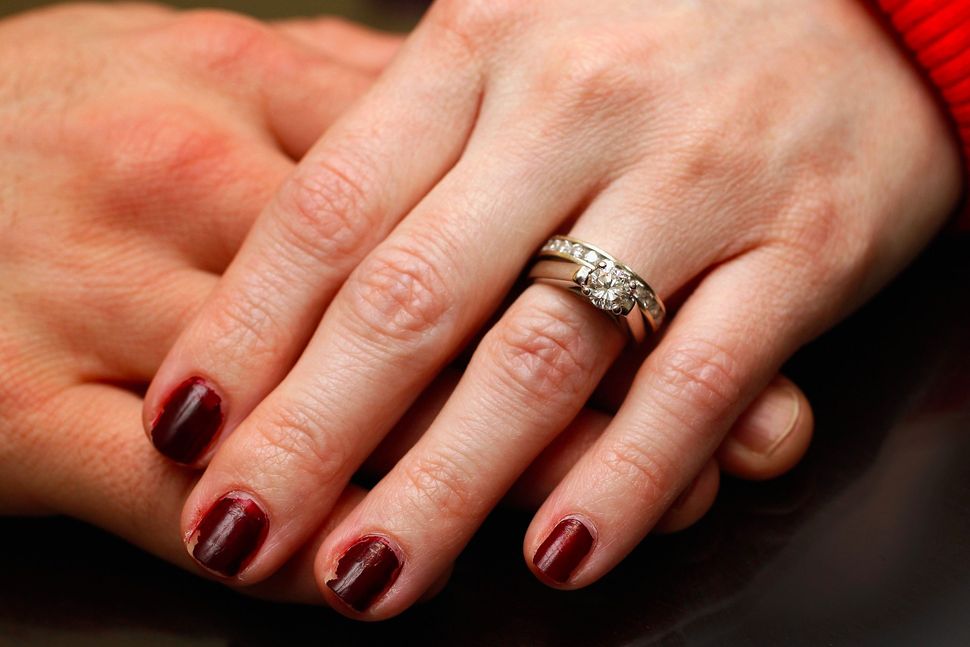 A timeless yet era-specific question: Should a Jew marry out? Image by Getty Images

Emily Shire has an essay up at the Daily Beast whose headline reads, “How Does A Single Jew Find a Nice Goy To Date?” A catchy headline for sure, but one whose answer is, in effect, ‘By leaving the house.’ Or not even, in the age of apps. Unlike early 19th century France, when Napoleon very much wanted Jews to marry out, but there was little reason to think non-Jews were prepared to invite Jews into their families, in 21st century America, it’s easier, all things equal, for a (secular) Jew to marry out than in.

The headline is a bit misleading, however. Shire writes about her difficulties finding a Jewish guy, and her ensuing willingness, maybe, to remove the “Jewish” requirement. She interviews intermarriage experts who reassure her that a gentile spouse doesn’t necessarily mean non-Jewish kids.

Given that my dissertation topic was, as you might have guessed, intermarriage in 19th century France, I have read a lot of “takes,” if one can call microform materials that, on the topic, in various Jewish publications, mainly French ones. The topic is a standby, and I feel very meta, or something, weighing in here. Part of a grand tradition, in a way. My reason for doing so at this time is that Shire’s article gets at something crucial about the topic, crucial but all-too-often ignored: Deciding against marrying out may well amount to deciding against marriage.

There’s something about the way intermarriage is often discussed that presumes Jews who marry out are choosing that path. Choosing, that is, to marry out, as versus choosing a spouse who happens not to be Jewish, which is how it actually tends to work. But also choosing to reject a presumed Jewish alternative, as though every single-as-in-available-and-looking Jew has someone in the curtains, a summer-camp or Hebrew school beau, whom they could settle for, who’s proposed and is waiting, but no, they had to be difficult and rebellious and instead go with a non-Jew. This… may have once been true, if “Fiddler on the Roof” is any guide, and may still be true in some more observant parts of the Jewish community. But it’s not so much the case that every young or youngish Jewish adult whose parents kinda-sort hope they’d marry in (and let’s not forget that some don’t care either way) has, at the ready, some communally-suggested options. Which is worth keeping in mind before judging.

Intermarriage in the Post-“Fiddler” Age