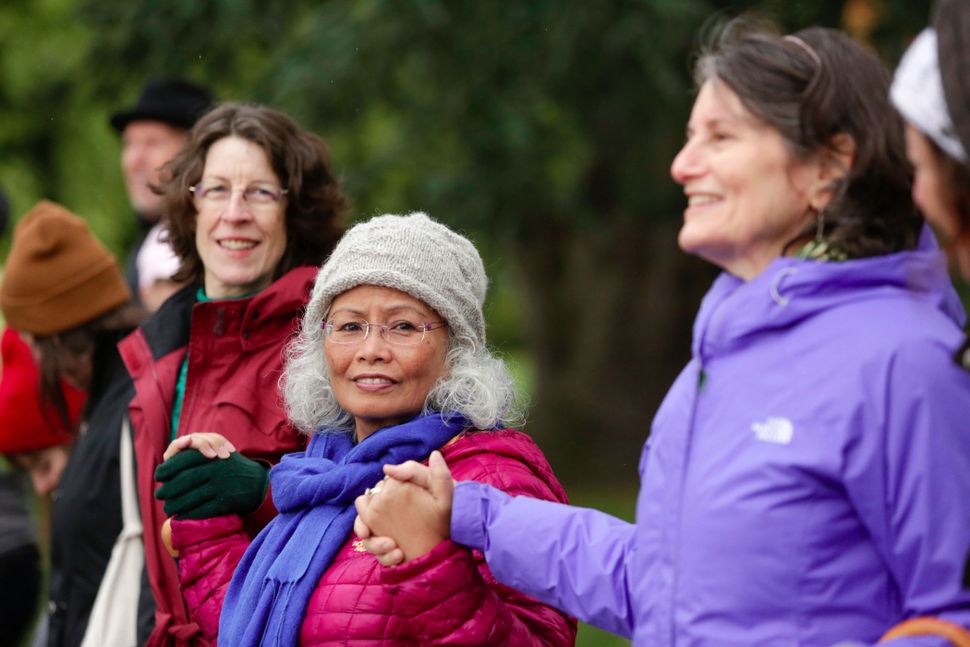 Full disclosure #1: I am a member of Pantsuit Nation, that Hillary Clinton adoring Facebook group that has, more than anything else in the past few months, served as testimony to the viral power of the internet and the upside to armchair activism.

Full disclosure #2: I loved (past-tense) Pantsuit Nation. For weeks, just after the election, it was a panacea to the full-scale panic and horror of the Trump-fueled news cycle. For every new story about a “This can’t be real” cabinet appointment, there was a heartening confessional about how a woman fought back against sexism, racism, or homophobia. These anecdotes were inspiring, moving, hopeful, and even the heartbreaking ones made you feel a little less alone, a little less frightened.

But recently, I’ve found myself rolling my eyes at Pantsuit Nation posts, or skipping them altogether. The site, with an appeal grounded in wishful grassroots idealism, has, as others have also observed devolved into arguments about identity politics, and too many confessional self-congratulatory posts from white women who have suddenly realized they’re racist/privileged/sexist/homophobic, and countless other posts explaining, with self-righteous rage, what, exactly, intersectionality is, and why it matters. There’s still a lot of good to be found there, but with a membership at 4,000,000 and counting, too many of the posts begin with statements like, “I really hope my story makes it through the admins, because I really need to be heard.” Or, down on my luck stories that inspire people to want to give money and that read as thinly veiled fundraising attempts.

In short, Pantsuit Nation has turned into that old friend who likes to (self-righteously) explain your privilege to you while blithely sipping a six dollar fair trade latte made with artisanal almond milk by a man-bun sporting barista. Privilege? What privilege? Self-reflection? What self-reflection?

And, as of a few weeks ago, an announcement that Pantsuit Nation’s founder, 33 year old Libby Chamberlin had been given a book deal. This is not a surprise. This is America after all, and once it has 4,000,000 followers, the agents (Hollywood and literary) are never far behind. Even the best of intentions can be commodified if they’re lucrative enough. That, in and of itself, is not the problem. The problem is that the self-congratulatory buzz one gets from reading and commenting on Pantsuit Nation, if it stops there, is going to do very little to advance the cause of human rights, equal rights, or any kind of resistance to the scary new administration. Don’t get me wrong: Telling our stories, raising our awareness, and feeling galvanized by others fighting the good fight is important, but it’s not enough. And a book deal, or hand-wringing in a social media vacuum now available for $19.99 at Barnes and Noble is simply not enough. As Episcopal Priest Barbara Brown Taylor once wrote: “To paraphrase a parable of Brother Kierkegaard’s, if you put a bunch of people in a lobby and give them two doors to choose between – one that says ‘transformation’ and another that says ‘lecture on transformation’, then most of them are going to line up for the lecture.”

And if there’s anything we should have learned from the outcome of the election, it’s that lectures on transformation, seductive as they might be, are not enough to fix what’s broken.