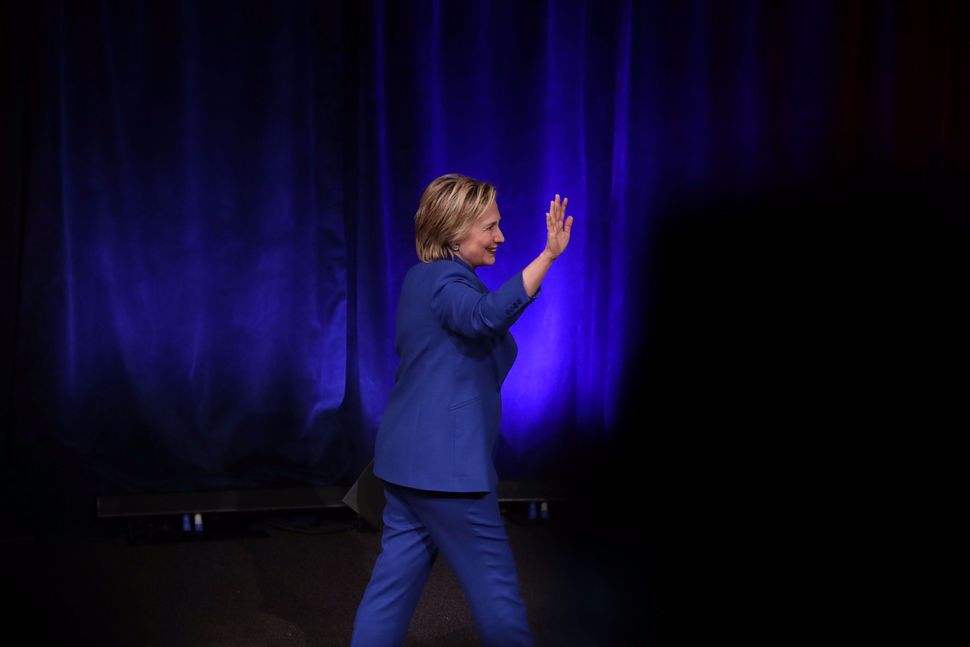 I am not now and never have been a member of the Pantsuit Nation. I don’t even really own a pantsuit, but can merely combine a navy blazer from one store and similarly navy slacks from another if this is needed, which, to be fair, it rarely is.

I had, however, known of the private Hillary Clinton-inspired Facebook group’s existence, and can see why a book emerging from a once-private online space would cause controversy. On the Daily Beast, Erin Gloria Ryan has a nuanced take-down (yes, such things exist!) of the book, but also the group, which, writes Ryan, “devolved into is a space for white people to pat each other on the head for acting in a manner most woke.”

Ryan’s description of the site – whose public face we may all take a look at – does not make it sound especially earth-shattering:

“For every inspiring story of a girl who faced down bullies at school, there’s a self-congratulatory post by a white person who, let’s say, helped their neighbors, who are Muslims, shovel their driveway. For every voice-amplifying anecdote from a person who overcame disability or sickness to support Hillary Clinton and how they will continue to fight, there’s a woman bragging about, say, decorating for the holidays with a black Santa ornament.”

“[T]he group was flooded with heroic tales in which Pantsuit members, generally white, encountered someone involved in an outrageous act of hatred, usually against a person of color, and were the only ones in the store, the park, the workplace, wherever, to do anything about it.”

So, none of this is great. Where I’m stumped is, is there indeed a broader message in this? Ryan sees a Hillary parallel, laying out why “the Pantsuit Nation book deal encompasses several things that went wrong during the 2016 campaign.” I see… a mess. A mess I’m trying to disentangle, and here’s where I’m at with that:

I have said and will go on saying that sexism played a greater role in the election than flawed feminism. (See Michelle Goldberg’s brilliant but massively upsetting Slate essay on all that was lost; it wasn’t just the prospect of, in 2017, finally having a female president.) It is deeply frustrating that the trampling of women’s rights has led to a big reckoning about what feminism got wrong. Frustrating, but, perhaps, pragmatically-speaking, necessary.

Strategically, now that the election’s over, the time has come – as Ryan and Klein both note – to find productive ways to move forward. But… how? What does a “pro-woman” movement (see also: the Women’s March On Washington vagueness) involve?

From reading many of the ten trillion think-pieces on this and writing more than my share, and from just, well, existing, I have a very clear sense of what feminism shouldn’t be, but no real sense of what it should.

What will this new feminism be, the one that’s intersectionally attuned to marginalized women, women of color, poor women, trans and gender-non-conforming people, but also more empathetic to all those white, Christian, middle class and wealthy women who voted for Trump because reasons? How will this new feminism steer clear of both pop culture and academic jargon? And none of this is even getting into bigger intractables, most obviously: reproductive rights, feminist non-negotiable or divisive distraction?

The only thing everyone trying to revive feminism these days seems to agree on is: less Lena Dunham. Less Sheryl Sandberg, less Hillary Clinton, less discussion of the plight of women who very nearly have it all. Which is understandable, but not really a direction, either. And this isn’t even getting into the Scientific Fact that class privilege benefits men but can, in at least some situations, actually hurt women. So maybe the new feminism should not, in fact, devote itself to all women with the exception of the country-club set, but rather to all women, period? But, once again: How?