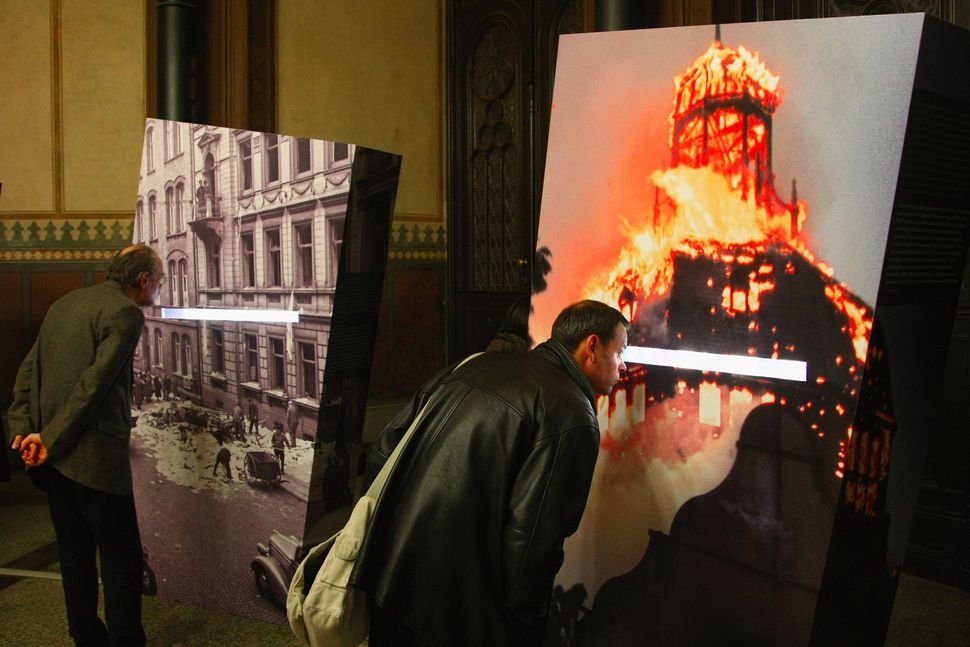 If there were ever a clear act of anti-Semitism, it would be a synagogue torching in Germany. Attacking a synagogue in Europe is about as definitively anti-Jewish, as versus anti-Zionist, as it gets. And Germany! Case closed, one might imagine.

Not so: In the Jerusalem Post, Benjamin Weinthal reports that a court decision in Wuppertal recently upheld a 2015 ruling that a 2014 act of synagogue vandalism was “not […] motivated by antisemitism,” but rather by the conflict in Gaza.

So. I’m as outraged as a headline like “German Court Calls Synagogue Torching an Act to ‘Criticize Israel’” demands, but maybe for slightly different reasons than one would imagine. (And – I’m now seeing – than Liel Liebovitz, in his Tablet response to the Jerusalem Post coverage.)

It seems relevant (how relevant is unclear) that the men who attacked the synagogue in Wuppertal were, according to Weinthal, German Palestinians. And… I realize this puts me in the minority among Zionists, but I think it’s a mistake to view Palestinian anger at Israel in an “anti-Semitism” framework. Certainly when one is discussing conflicts within the Middle East. It gets trickier when that anger is expressed at Jews outside Israel, or at Jewish religious institutions.

Point being, it’s plausible, given the timing and the identity information provided, that the motivation here was something other than the one that motivated Kristallnacht. Maybe this was a scapegoating of Jews in reaction to actions by the Jewish state, as versus a scapegoating of Jews in reaction to events with nothing particular to do with Jews. Both can (and should!) be condemned without us needing to put the two into the same conceptual category. Anti-Semitism, sure, but not Nazism, which is what “anti-Semitism” in the German context unavoidably evokes. The fact that this terrible crime occurred in Germany feels weighty and symbolic but is maybe irrelevant, at least when it comes to the crime itself.

What concerns me more is the readiness of German courts to give anti-Jewish violence a pass. Regardless of whether anti-Semitism strictly defined was the motivation, it’s anti-Semitic to give a go-ahead to synagogue-burning as protest. It’s super duper anti-Semitic for white Christian or secular Westerners (and pardon the leap but I’m guessing that’s the main demographic in German courts) to offer a ‘Palestinian cause’ cover for their own anti-Semitism. Which is of course different from white Christian Westerners caring about suffering, of Palestinians or anyone else, which is, you know, good. The question is really whether in any but the most convoluted sense, taking a low-key approach to German synagogue torching is a net good on the human rights front. Is the court decision about alleviating Palestinian suffering, or about, oh, I don’t know, German frustration at decades’ worth of hearing about Jews as victims? Because it sure isn’t about it not being anti-Semitic to torch a synagogue.

And this isn’t an entirely sarcastic “I don’t know.” It would be helpful to know more – specifically, was the Gaza pretext something the defendants themselves spontaneously came up with, or was it a leap made by the courts themselves? (This isn’t clear from this recent coverage or a 2015 story.) If the latter, then gosh yes, I would be that much more furious.