Somewhere on the Upper East Side, a Jewish Woman Has a Neo-Nazi Husband 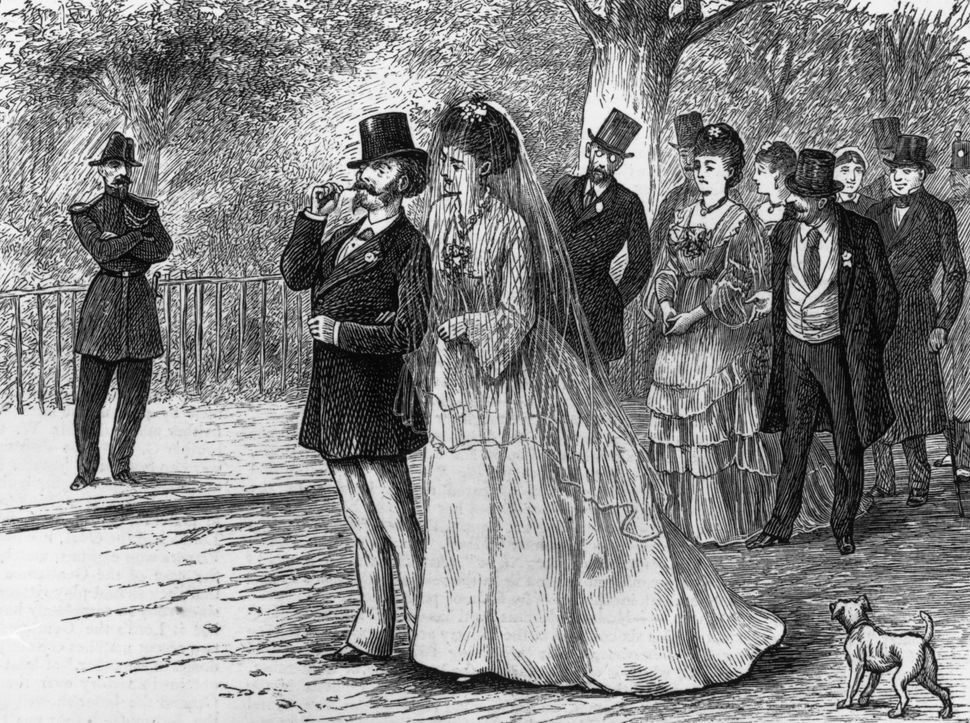 A wedding in nineteenth century France. Image by Getty Images

News broke over the weekend that a prominent neo-Nazi troll going by the name Mike Enoch was not a disgruntled grassroots white supremacist coming out of a part of the country with few Jews and a vivid imagination about what The Jew might be like, but rather a dude living in the Upper East Side (!) with his Jewish wife (!!!) Big if true as the saying goes.

On the one hand, this is upsetting to think about from the perspective of… well, of the Jewish woman somewhere uptown, married to a man whose secret computer activities are up there among the worst of what one could imagine. On the other, it’s not exactly surprising that an anti-Semite might either make an exception for one Jewish woman or (as in Pierre Drieu la Rochelle’s 1939 novel [Gilles](https://en.wikipedia.org/wiki/Gilles_(novel “Gilles”))) not even. Which, again, shouldn’t really surprise us. After all, it’s never assumed that a man with a wife or girlfriend couldn’t possibly be sexist. Nor, for that matter, should it be assumed that in every man lurks a violent misogynist, so I wouldn’t make the leap that some 19th century French Jewish newspaper writers did (in what was in some ways but oh, not all, a very different context) and warn that when intermarriages get rocky (which, in these warning stories, it was assumed they would), out will pour the non-Jewish spouse’s latent anti-Semitism. Given the sheer weirdness of the online “alt-right”, it’s always possible that a man who on the surface would appear to be a good Jewish husband (or wife!) is behind some of those memes as well.

As for the Upper East Side part… What this suggests is that someone can be a raging anti-Semite (or perform raging anti-Semitism, as if there’s a difference) despite having had day-to-day exposure with Jewish people. Once again, this is upsetting for anyone who felt safe, as a Jew in an area with many Jews, knowing at least that they were unlikely to be anyone’s First Jew, to whom it’s now occurring that the alt-right menace could be in front of you on line at Citarella. But it’s not surprising. Goodness knows there’s anti-black racism in parts of the US where black people live. Hate is everywhere. Exposure to the fact that members of all identity groups are human beings ought to be enough, but sadly, all too often, it’s not.

Somewhere on the Upper East Side, a Jewish Woman Has a Neo-Nazi Husband