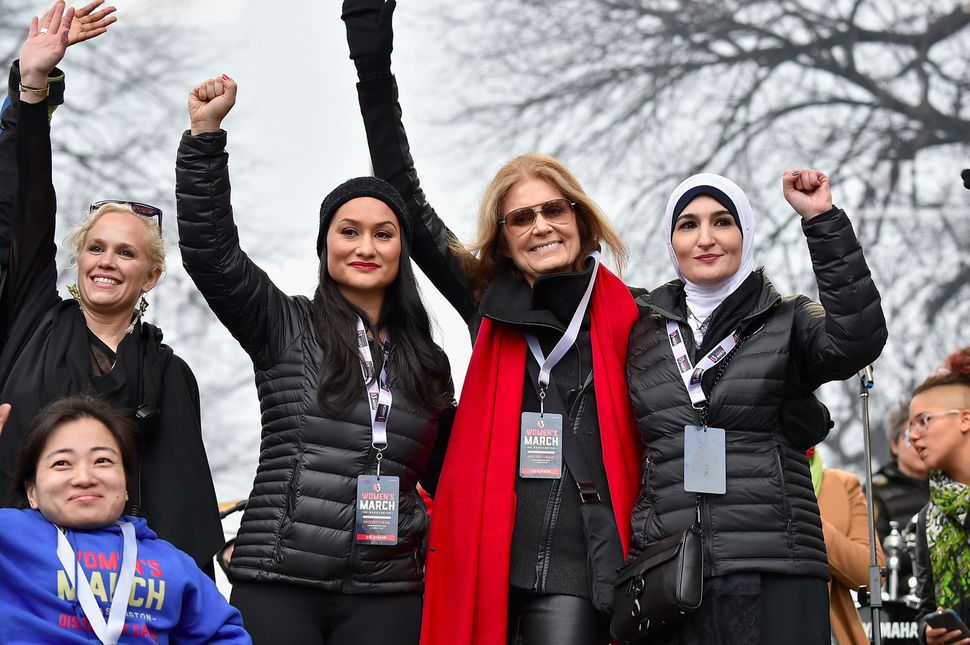 One of the leaders of the history-making Women’s March On Washington has recently come under vicious attack from the right for being an anti-Semite. Newsflash to the skeptical: she may wear a hijab, but Linda Sarsour is a fierce advocate for all marginalized people – including Jews.

Sarsour, a social justice firebrand and lead organizer for the march, one who happens to be Muslim, is a friend to people of conscience everywhere, and the Women’s March of 3.3 million worldwide, could not have been what it was without her voice – the start of a movement. This was not just a one-day event, but the beginning of a surge of activism, including running progressive women to take back congress and state legislatures. Sarsour’s long history of social justice work includes being an advocate for immigrant’s rights, police reform, and ending racial and religious profiling.

The backlash against Sarsour started with a piece in Front Page Mag, a radical right-wing site founded by David Horowitz, a renowned racist and Islamophobe (listed as an extremist by the Southern Poverty Law Center). I prefer not to link to such vile sites, but in a piece that posted on Monday, Horowitz accuses Sarsour of being somehow suspect because she has family in prison in Israel, is an advocate of the BDS movement, and – horror of horrors – she was a supporter of Occupy Wall Street.

Bethany Mandel’s op-ed about Sarsour in the Forward hurt my heart, both as a woman and as a Jew. Mandel’s grievances are similar to those of Horowitz, and similarly wrong.

No, the Women’s March organizers don’t need to “be more careful about the company they keep” as she suggests. This kind of talking down to women of color, those that organized the march, is precisely the kind of white privilege that the organizers aimed to eradicate.

Mandel highlights a comment Sarsour once made about loan-forgiveness under Sharia law, rather than paying attention to her overall message – that economic justice should be central to all social justice discourse. This criticism sounds like it’s coming out of Pamela Geller’s handbook – it’s scaremongering, the likes of which Islamophobes have trafficked in for years. This has has no place in our discourse, especially at this volatile moment – with fascism rising fast, 140 characters at a time.

Just because Sarsour is an advocate for Palestinian causes — as many Jews and Israelis are — doesn’t put her in opposition to Jewish values. I also believe that the occupation is illegal and immoral – so am I an anti-Semite? I believe that Trump’s pick for Ambassador to Israel, his former bankruptcy lawyer David Friedman (who happens to be from Woodmere, my hometown) is a bigot who will further inflame tensions in the region. Does that make me an anti-Semite? I believe the settlements should be dismantled. Does that make me an anti-Semite? My Israeli friends don’t think so.

My ancestors were immigrants who came to the shores of America to escape oppression. My great-great grandfather Simon Steingut started out as a community activist, serving the poor, downtrodden Jews of the Lower East Side. This was back when Tammany Hall would not allow Jews to hold official government jobs.

Later, my great-grandfather Irwin Steingut followed in his father’s footsteps to become the first Jewish Speaker of the House of the New York State Assembly, a representative from Brooklyn. I believe Sarsour is headed for office one day – at least I hope she is.

In the 1930s, my great-grandfather called upon his fellow New Yorker Franklin Roosevelt for an urgent favor. Irwin grew up on President Street in Crown Heights, next door to a rabbi. The rabbi told him that he’d received word of a town full of Hasidic Jews from Russia, stranded in Poland: refugees attempting to escape Hitler’s rise. Ships had already been turned around en route to the US, thousands of Jewish refugee families sent back to certain death. Could he, the rabbi begged, do something to help these fellow Jews whose fate would otherwise be sealed?

FDR allowed their ship into New York Harbor and the Lubavitcher community continues to thrive in Crown Heights. Why can’t we offer the same safe harbor to human beings from Syria, Yemen, and other war-torn regions?

Just this week, Trump stepped up his plans to build a racist border wall and block Muslim refugees from entering the country via executive order. Jews of conscience need to remember who we are, especially on Holocaust Remembrance Day. This happened to us less than a century ago. It also happened to us during the Inquisition, and through pogroms. Our villages were set on fire, just because of our bloodline. These memories are threaded through our DNA – how can we not stand up against the forces that threaten to harm the people who face it in 2017?

Linda Sarsour stands against this kind of hate, and she stands for a powerful, feminist response to all of Trump’s assaults against our humanity, our children, our planet and our freedoms.

What Jewish critics of Sarsour and the Women’s March need to understand is that we will not have a robust movement against Trump until and unless we have a truly intersectional one. Jewish values must be intersectional values — when Ashkenazi Jews align ourselves with our whiteness and our privilege first, we forget who we are and where we came from.

Because of Sarsour’s brave work, and the work of other women of color, a movement has just begun, and it will keep growing until we get our country back – for women, for those who are black and brown, for immigrants, for LGBT and Muslim and disabled and Jewish people – for all of us.