At Tel Aviv Women’s March, Jews Disagreed About Occupation, but Not About Trump 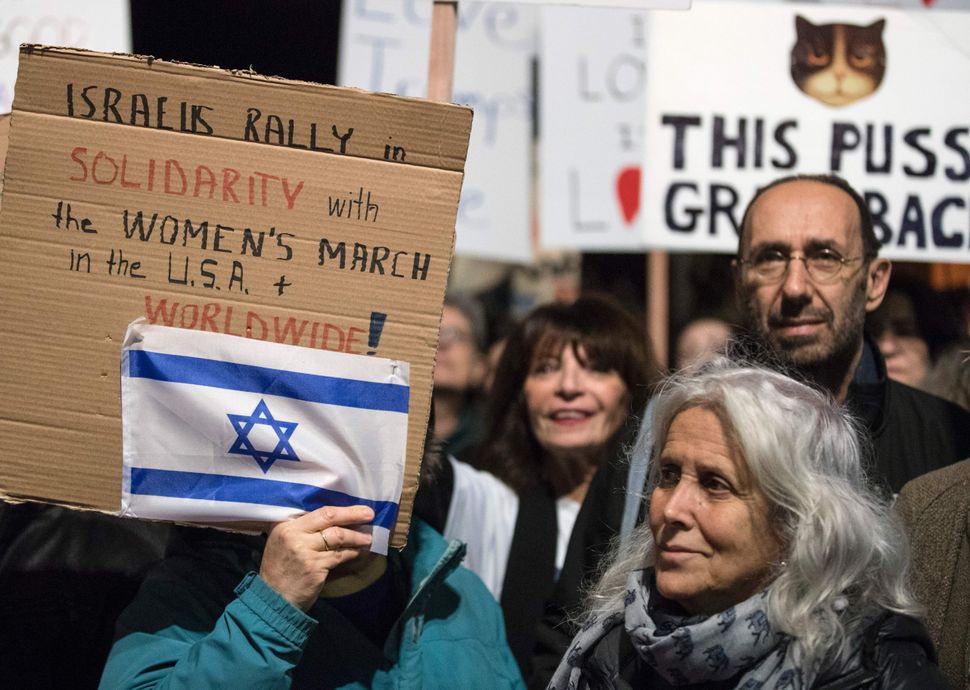 Tel Aviv, too, marched against Trump. Image by Getty Images

The 80 shirts I’d printed were snapped up by the early arrivals before the Tel Aviv Women’s March even started. By 8pm after my shirts were all gone, I tried to get to the front of the rally with my fellow planners, but there were just too many people. So instead I proceeded to circumnavigating the crowd, which by 8:30pm had swelled to more than 400. I cheered and whooped to the speeches, all the while walking around hugging friends and acquaintances and reveling in our success.

But then the moment that I most feared happened. The speeches were over and the chanting started. There was a “Love, not hate, makes America great,” and “Women’s rights are human rights” and then sure enough, the anti-Occupation groups did a chant of their own.

When Pantsuit Nation Israel (PNI) found out that anti-Occupation groups, All That’s Left collective (ATL) and If Not Now wanted to cosponsor the rally we were planning, we were faced with our first real challenge. PNI is explicitly, and consciously, a nonpartisan group that seeks to provide a space for people across the political spectrum opposed to Trump’s election. We focus on American policies, the American Jewish community’s positions, and support for Americans who have been victims of the rampant hate that Trump has unleashed.

PNI agreed to work with ATL and If Not Now as a coalition in planning the rally, but we worried that some of our centrist followers would be turned off, or that we could become labeled—and dismissed—as leftists ourselves. So we posted in our FB group that we were co-hosting the rally with them but that their views do not represent the views of PNI.

But we were committed to doing this together, in spite of the tensions.

And now here we were – the moment of truth. I listened for angry shouting or altercations. Instead, PNI took up the next chant: “What do we want, democracy, when do we want it, now”. The rally just kept going. I observed the entire event perimeter and no one was leaving. After several rounds of chants, a rousing song session that included Lo Yisa Goy, Oseh Shalom, and more, created a summer camp euphoria.

At this point I was struck by what a special moment this was. We had created a major event attended by a broad audience of primarily Jews – diverse in age, geography, religious observance, and yes even politics (Hillary and Bernie supporters, even some Republicans and independents) without silencing the younger anti-Occupation activist groups, or allowing Israeli politics to destroy the rally’s power.

For such a diverse group of primarily Jews to include anti-Occupation voices without everyone fighting or leaving seemed pretty miraculous – unheard of, actually. For sure, not everyone joined in the anti-Occupation chants specifically. But they stayed. We didn’t agree on everything, but we managed to work together in a respectful way and create something unexpectedly profound.

Yes, it was hard. I heard from several people, including at least one Republican who attended that they were uncomfortable with some of the chants. I get that. At the same time, some of the anti-Occupation participants were frustrated when their chants were drowned out by songs. Ultimately, their energy really made the rally and many of us from PNI were happy for their strong presence. Let this be the way that all of the American Jewish community’s conflicts around Israel are managed – with a sing down!

We all have to come together now to fight for women’s rights, to combat racism, anti-Semitism and hate, to stand up for immigrants and minorities and, probably most importantly, to save our planet as the climate change deniers push us to the precipice of catastrophe. Coming all together means being uncomfortable at times, and being with people with whom we don’t always agree. So we are going to have to get used to being a little uncomfortable for the sake of the larger cause.

Of course, this group was not representative of all American Jews in Israel or anywhere. It did not include those who support Trump. When I speak now of everyone needing to come together, I am speaking of the more than 70% of American Jews who voted against Trump.

My favorite part of our rally was the moment when the ATL speaker realized that the PNI speaker had already used the same Martin Luther King Jr. quote with which she had been planning on closing. She was embarrassed, but I thought that this just proved that there is in fact a unifying belief that binds us together and on which everyone at the rally agreed.

The moral arc of the universe is long, but it bends towards justice.

Rachel Canar, an American Israeli, is the director of NGO Catalyst. She is also a former Hillel Director and Jewish summer camp enthusiast.

At Tel Aviv Women’s March, Jews Disagreed About Occupation, but Not About Trump