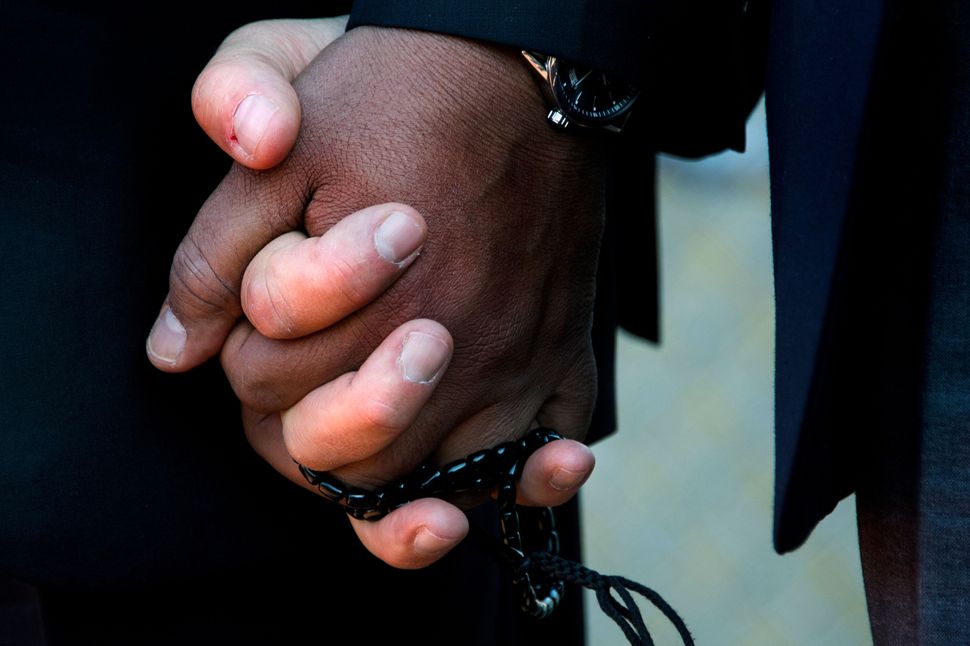 I just read with interest that Hebrew College, in Massachusetts, has introduced “the first-ever graduate school of Jewish Education to establish a specialization in our Master’s Degree program and a standalone graduate certificate in Interfaith Families Jewish Engagement.” IFJE’s director is Keren McGinity, who also — full if not especially scandalous disclosure — edited an intermarriage-themed issue of the Journal of Jewish Identities that my own research appeared in. The program at Hebrew College is now taking applications.

What excites me most about the new initiative is its focus, as McGinity puts it in her program goals, on “the ways in which case studies of intermarried Jews and their loved ones can be used to debunk popular culture and stereotypes.” While the intermarriage conversation needs a dose of inclusivity, it also, at least as urgently, needs one of modernity.

Perceptions of intermarriage have a way of lagging behind realities. The implied partner is, all too often, a generic representative of mainstream society. White and Christian. Probably a country club WASP. Blythe Danner will play the mother-in-law in the film version. The assumption, usually implicit, is that the Jewish partner (an Ashkenazi, US-born man; do Jews come in other varieties or something?) is the one in the couple with the marginalized identity, as though there could only ever possibly be one.

In life, in the US today, Jews of course marry people of all religious and ethnic backgrounds, including non-Jewish people of color, and including people from other minority religions. Or don’t marry, as the case may be: If you want to feel uncomfortable and upset, read Lilian Oben’s recent Modern Love column about an interfaith romance gone sour: “I thought maybe the worst was over, but he went on to state the obvious — that I was black and not Jewish.” Dude sounds delightful.

For every Jewish family concerned about an intermarriage being the end of a family tradition, there’s a non-Jewish family with traditions of its own. Traditions that may involve Christmas trees and reserved passive-aggression following copious scotch consumption, but that just as well might not. If the non-Jewish partner is Buddhist or Muslim, Hmong or Igbo, the usual narrative falls apart. Less urgent, but still important: Even white Christians — particularly those who’ve recently immigrated — have specific cultural practices they may not wish to chuck. Not “white Christian” practices (argh) but, say, Italian or Swedish ones, or Mormon ones, or… you get the idea.

The Jewish intermarriage conversation needs to acknowledge that non-Jewish partners are multidimensional human beings, not abstract embodiments of Threat to Jewish Peoplehood. This means welcoming non-Jews into Jewish life, but also accepting that even interfaith families raising Jewish children will be passing along specific cultural traditions from the non-Jewish parent as well.